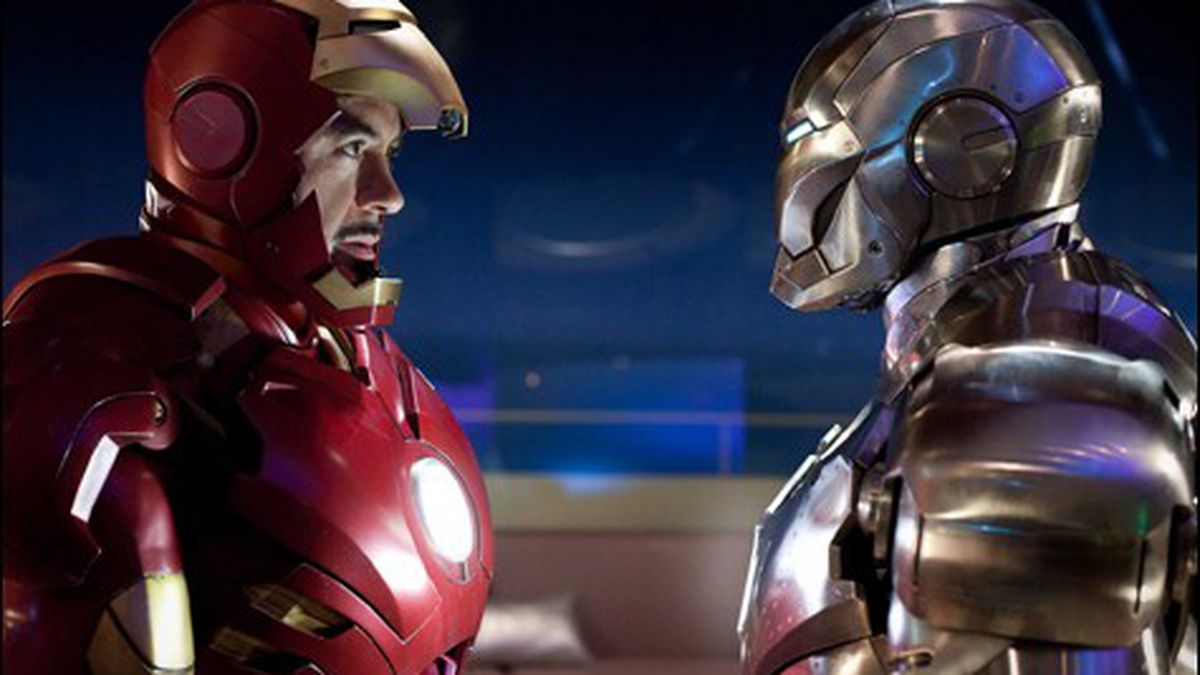 Is it too early to call Iron Man 2 the smartest movie of the summer?

Is it too early to call Iron Man 2 the smartest tentpole movie of the summer? This is only May. Summer won’t even officially begin for another month and the usual tidal wave of bombastic kiddie entertainment has just now started trickling into the plexes.

And yet Jon Favreau and Robert Downey Jr.‘s sequel to the 2008 “thinking person’s blockbuster” is so accomplished, such a visual grabber, with so much unexpected food for thought, that it’s hard to see how it could be topped. Both actor-turned-director Favreau and on-again movie star Downey really find their groove in the continuation of Marvel Comics‘ superhero yarn about a do-gooder in a magic suit trying to save the world when he can’t even save himself.

Everyone, it seems, wanted to be in Iron Man 2. Larry Ellison, Christiane Amanpour, Marvel big daddy Stan Lee, and Larry King are among the celebs elbowing each other out of the frame in the pic’s multitude of cameos. Director Favreau, on board for the second go-round, fills out the role of Tony Stark’s (Downey) sidekick Happy Hogan — pretty much the same role he had in relation to Vince Vaughn in Swingers, once upon a time. And that’s John Slattery, aka Roger Sterling from Mad Men, in customary Sixties drag as Tony’s inventor father.

Mickey Rourke was an inspired choice, maybe the only possible choice, for the part of the Russian anti-Iron-Man Ivan Vanko. With his grotesque visage and the requisite scalp-to-toes tattoos — how many of them were really Mickey’s, and how many were added for the role? — the one-time handsome leading man cuts quite a figure in the trailers, flexing his muscles and cracking his high-voltage bullwhip.

Rourke is still acting with his eyes, only instead of the flashing baby-blues from Diner we get Ivan’s languorous, reptilian stare, as in the scene where he is left in the guard of a couple of corporate goons holding him prisoner. Pity the poor goons — he’s the comic-book Hannibal Lecter. Vanko, of all the characters, at least identifies personally with Tony’s pain. They’re both sons of famous inventors, the former with a terminal grudge against the latter for co-opting his birthright.

As the representatives of S.H.I.E.L.D., Nick Fury (Samuel L. Jackson) and Natasha Romanoff (Scarlett Johansson) supply the ambiguity factor, the third force in Tony’s struggles with all that is reprehensible. Jackson could play a character like Fury in his sleep, and perhaps he did. Johansson, on the other hand, shows us something we’ve never seen before. Her martial arts moves notwithstanding, Johansson’s Natalie/Natasha character, an obvious mole in Tony’s staff, gives the actress an added dimension she’s seldom enjoyed — with the possible exception of her Nola in Woody Allen’s Match Point, Natasha is Johansson’s first film role to take full advantage of her basic air of untrustworthiness.

In fact, director Favreau and his crew deserve credit for unmasking the neglected dark side of both Johansson and Sam Rockwell, who plays Tony’s nemesis, arms manufacturer Justin Hammer. Rockwell and Johansson have been cast in leading roles most of their careers, but they’re actually perfect for slippery, slimy heavies. Rockwell’s oppressive natural unctuousness and Johannson’s spoiled petulance go together, like bad bologna and botulism. They’d make a wonderful pair of evildoers — some unfortunate kid’s ghastly parents, for instance, or maybe a husband-wife team of concentration-camp commandants in the sick sequel to The Boy in the Striped Pajamas.

The hardest parts to play in Iron Man 2, aside from that of Tony Stark, are the good guys. As Tony’s ally “Rhodey” Rhodes, Don Cheadle‘s chief perk is jetting around in front of a blue screen in one of the stolen Iron Man suits. And then there’s the truly thankless role of Tony’s long-suffering significant other, Pepper Potts (played by Gwyneth Paltrow), who mostly holds cool compresses to his fevered brow. Try as they might, Cheadle and Paltrow go to waste. This is comic-book narrative we’re talking about here — if it doesn’t have action, it pretty much doesn’t register.

Sword or shield, that is the question. Tony Stark, comic-book Hamlet, wrestles nakedly with that and other dilemmas. It may not be the signature performance of Downey’s career — that would have to be Chaplin — but Tony, with his father-son guilt, bad ticker, and (ahem) drug dependency problem, is a righteous bundle of nerves. He’s the ideal billionaire technocrat: part philanthropist, part rock star, all self-doubt, yet pleased with his toys.

Screenwriter Justin Theroux (Tropic Thunder; nephew of author Paul) reworks Lee’s perplexed superhero with a keen eye for the travails of the all-too-human Downey, one of America’s finest screen actors. Can he do standup comedy, as in Tony’s “Expo” routine? Can he triumphantly crow the line: “I have successfully privatized world peace”? Does he look good behind the wheel of a Formula 1 racer at Monaco? Yup. Downey should host the Oscars.

Of course, the issues at the heart of this franchise’s premise are as serious as box-office receipts. In the age of benevolent inventors and voracious sharks, who is to protect ordinary people from the military-industrial complex — which lusts openly for Tony’s technology? Certainly not people like Garry Shandling‘s hilarious Senator Stern. Is pissed-off Muscovite hellraiser Ivan Vanko ultimately so much worse than accident-prone, profit-mad defense contractor Hammer Enterprises? And who’s going to program the drones? Tony will not live forever. The center cannot hold. It will take further sequels to sort this all out.

In all the hubbub, we’ve forgotten to talk about the special effects. They are copious and bracing. A nerd’s delight. Objects move rapidly and loudly, with great vigor. At the preview screening, fanboys squealed at the appropriate moments like pre-teen girls at a Hannah Montana concert. It is to these wired, arguably united constituents that Lee, Favreau, Theroux, and the cast, not to mention Paramount and Marvel Entertainment, are making their appeal to reason. Peel back the layers of irony and get down to it: Iron Man walks among us.

Sounds of the Experimental Latino Underground

The Sound Room and Uptown Kitchen Share Risks and Rewards