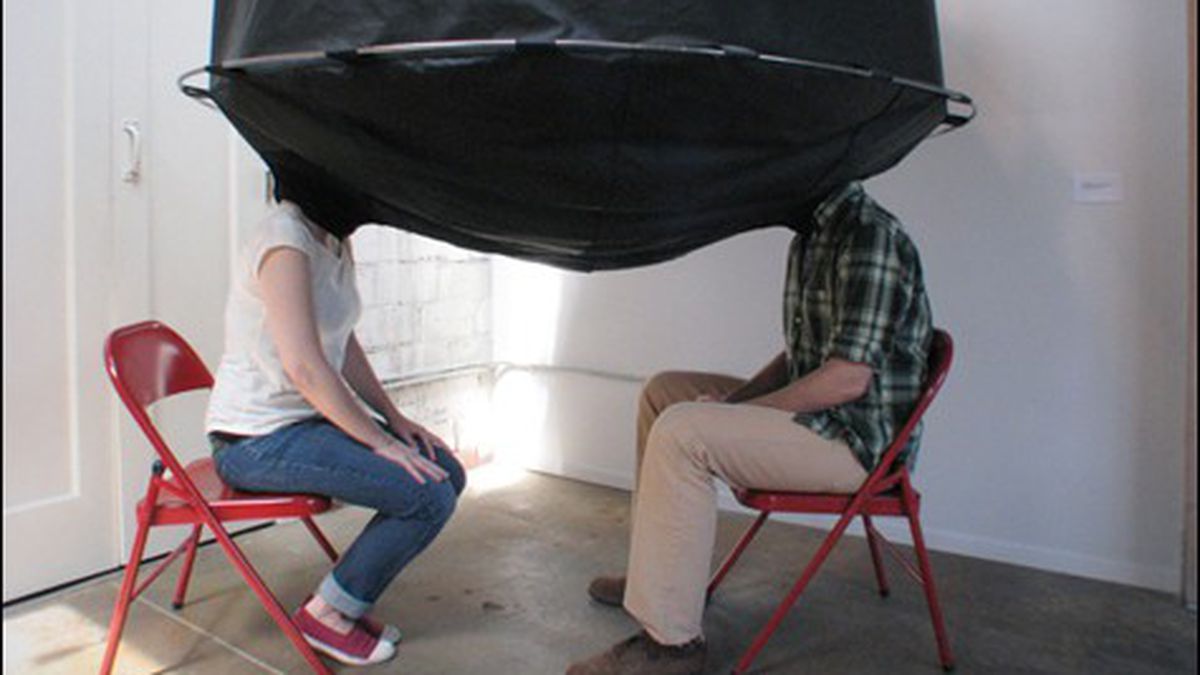 Digital technology has a forceful cognitive grip. It can hijack a word from another lexical domain and, before long, look like the word’s original steward. Interface, for example.

At least this was the trap I fell into when appraising the so-titled gallery, a promising newcomer to 49th Street’s Temescal Alley. Why appropriate a tech word — something that refers to the point of communication or exchange between a human and a computer — to describe art? Bad analogy: Surely interacting with art is far more complex and less prescribed than interacting with a computer, though they are both symbolic.

But, gallery curator Suzanne L’Heureux pointed out to me, “interface” was not always thus defined. At its core it is much more richly abstract: A point at which independent systems or diverse groups interact.

With this as a starting point, the gallery, and in particular its inaugural exhibition, In·ter·face, aims to expand — or rather, re-expand — the term.

“I’m interested in art that is thinking critically about the human relationship to our environment — how our experiences are mediated by a variety of interfaces,” said L’Heureux. “This can include television, language, a particular kind of discourse, mythic constructs, et cetera. And yes, technology. Anything that is between individuals and their experience of the world and is shaping or mediating those experiences.”

Some of the works on display announce an interface quite overtly. Helga Hizer’s “Apparatus for Undivided Attention,” for example, consists of a hanging black tent with two head-holes opposite one another. Pairs of participants enter to find themselves face-to-face — and nothing else. In thus mitigating the onslaught of visual information, the work allows participants to focus on the more basic interfaces of social interaction: language, tone, facial expression. Children adore it, couples find relief in it, and strangers become unbearably awkward.

Other works explore media that, as interfaces, appear to be neutral, but are in fact highly charged. For example, Kelly Inouye’s series of washed-out colored-pencil sketches, The Company You Keep, exhumes the patriarchal and commercial undertones/overtones that animated the long-running nature show, Animal Kingdom.

Tressa Pack looks at her own artistic medium: photography. Her large-scale print captures dusk or dawn in a nondescript field, where several studio lights beam an empty patch of grass. Thus, the artifice of the photographic setup is exposed. Yet, one is less inclined to see the photograph’s intended subject as having just fled, or not yet arrived, and more likely to place the equipment itself in this role: a group of lights have congregated on a field. Are they plotting? A magic remains.

In a crowning gesture, L’Heureux hopes to carry on a Monthly Mail Exchange, wherein visitors leave notes about the show and then receive ones selected at random by the gallery. A whole lot less direct than Hizer’s apparatus, but surely an interface of sorts, too.

New Study Reveals What It’s Like to Be Pregnant as a...

A Busy Race to Replace Quan