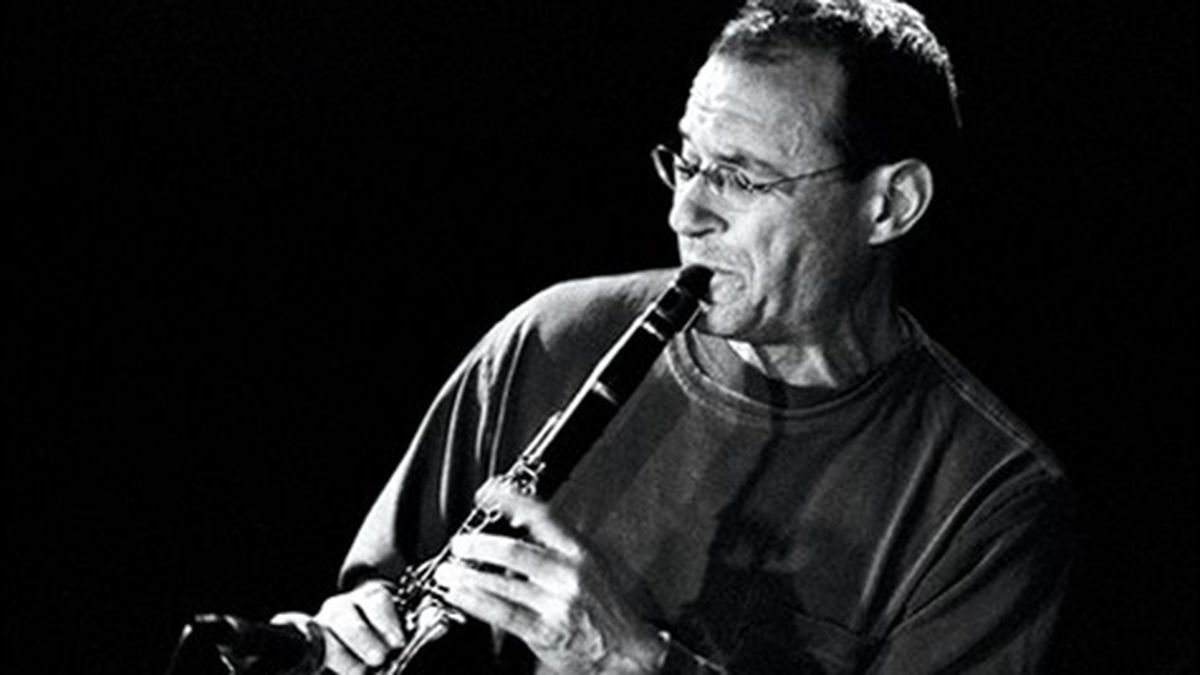 Inside the Mind of Ben Goldberg

Renowned local clarinetist unveils his "Brainchild" at the Starry Plough.

Ben Goldberg’s Brainchild had its genesis about fifteen years ago, when Goldberg got booked to lead a large jazz ensemble at Radio Valencia cafe, but didn’t have time to write any charts. “It was just one of those things where the ambition was bigger than the scale or time,” he said. As the day drew closer, he began thinking of alternatives — like showing up in dark sunglasses to hide his panic. Or making something up on the spot, and just telling everyone what to do. In the end, he did both.

Goldberg explains the process in the same careful, methodical way that he explains everything: He divided the musicians in sections and sat them down. Then he went up to each one individually, whispered a set of instructions, and gave a cue. The directives varied in specificity. He’d tell one person to play soft and beautiful, and another to arpeggiate in the key of A flat.

It was a strange way of organizing things, and Goldberg wasn’t 100 percent sure the idea would work. But the music was oddly satisfying. “It’s a liberating experience because they just have a task to do,” he said. “They don’t have to take responsibility for what to play next.”

Raised in Colorado, Goldberg moved to the Bay Area to get his master’s in composition at Mills College. He’s now a well-established clarinetist and bandleader, serving in Tin Hat Trio, Myra Melford’s Be Bread, Plays Monk, and his own quintet. Most of these groups have some sort of concept to anchor them (Plays Monk reinterprets the music of Thelonious Monk, for instance), but none is quite as ambitious as Brainchild. Off-the-cuff orchestrations are always a dicey proposition, especially when they involve up to twenty musicians. A bandleader undertaking such things has to place utmost confidence in his personnel. He also has to trust his audience.

The latest iteration of Goldberg’s Brainchild performed last Thursday night at the Starry Plough, and it seemed more top-heavy than usual. Goldberg had recruited a half-dozen woodwinds, three brass players, two keyboardists, three drummers, three bassists, a violinist, and three guitars. They spilled out over the stage and onto the floor, where pub patrons scooted their chairs back uncomfortably. Goldberg moved at a fast clip, pairing the drummers and the basses, clumping the woodwinds together at stage left and the brass at stage right. He wanted them on opposite sides to have “that antiphonal thing.” Deciding the guitars were the glue of the band, he sat them down up front. “Sonically, I want to use the guitars for sustained notes and for volume when it’s needed,” he said. “I wanted them to have a stinging presence.”

Spectators scratched their heads. Pianist Graham Connah sat at a tiny Nord keyboard, crossing his arms and crinkling his brow. It was already past midnight, and the air was redolent of cooking oil and spilled beer. A sizable crowd had turned out for the two opening bands, guitar-drums duo Lovely Builders and the Erik Deutsch organ trio. (Members of those bands would later join the twenty-piece Brainchild orchestra.) By the time Brainchild emerged, the audience had thinned out somewhat. That didn’t seem to bother Goldberg, who needed enough space to access all his musicians. At 12:30 he called everyone outside in a huddle. They talked for about ten minutes, while inside, roots-rock music and punk blared from the stereo speakers.

For a man of such large aspirations, Goldberg is remarkably small and unassuming. He arrived at the Starry Plough wearing glasses and a dark hoodie, and stood in the back like a wallflower, watching Deutsch nail a bluesy reinterpretation of “Mr. Bojangles.” He seemed to be mapping out a plan in his head.

No one, not even Goldberg, knew what to expect when the twenty musicians finally got onstage. The lights dimmed and the audience got quiet. A football game played silently on TV. A woman text-messaged furtively, her face lit up by the iridescent glow of her cell phone. Otherwise, no one stirred. Goldberg’s face was a study in intense concentration. He addressed the saxophones first, getting all of them to play a single line in tandem. He brought in the other sections incrementally: drums, bass, brass, guitar. He made a conductor hand signal that must mean “Fortissimo!” because everybody played their instruments at full blast. The drums sounded like bursts of gunfire.

One fascinating thing about Brainchild is its innate structure. The musicians played for twenty minutes without stopping, but they weren’t just unspooling forever in one direction. Rather, the piece seemed sectional. During the first half, everything built up. The scales went low to high, the volume crescendoed, the tension increased. Mid-way through, Goldberg had his woodwinds do a word association game. Each person had to say a four syllable word when Goldberg pointed. (They tended to be adverbs, perhaps because it’s easy to think of a three-syllable word and just add “ly” to the end.) In the last section, everything broke down. Scales went from high to low. Volume diminished. Melodies atomized. Goldberg brought in the words again at the end, but this time he had saxophonist Dan Plonsey go solo, saying five syllable words. “Philosophical!” Plonsey yelled. “Unambiguous!” “Anthropology!” Goldberg made the conductor signal for “cutoff.” He turned toward the audience. Brainchild was over.

It was hard to know what to make of the performance. At times Goldberg’s makeshift band sounded like a big, cacophonous, primal wall of sound. It could be very discordant — not for nothing did Goldberg use the word “sting.” It also had moments of beauty.

That said, Brainchild would be hard to appreciate if you didn’t know the concept ahead of time. For me it had the same vexing quality as a Kurosawa film, or the music of Philip Glass – I thought I should enjoy it a little more than I actually did. But Goldberg doesn’t seem to mind losing some listeners, so long as he can be unconstrained in his approach. If anything, he’s gotten more edgy over the years, mixing reasonable directives (play a triplet rhythm in E flat) with abstract ones (Plonsey said that in past performances, he’s told one musician to imitate another, while the other person tries not to be imitated.) He’s even given instructions based on mathematical equations, e.g., “play a negative number.”

When the Starry Plough performance was over, both horn sections seemed beat. So was Scott Amendola, who’d been onstage all night, drumming for all three bands. The lights and the roots-rock came back on. The musicians packed up. Goldberg shuffled about deferentially, thanking people. Asked how he managed to create such a well-structured piece off the cuff, the conductor looked quizzical. He said he’d had about ten minutes to assemble his chess pieces and think of a battle plan. He hadn’t considered structure at all. Goldberg shrugged. “It’s done on faith,” he said.