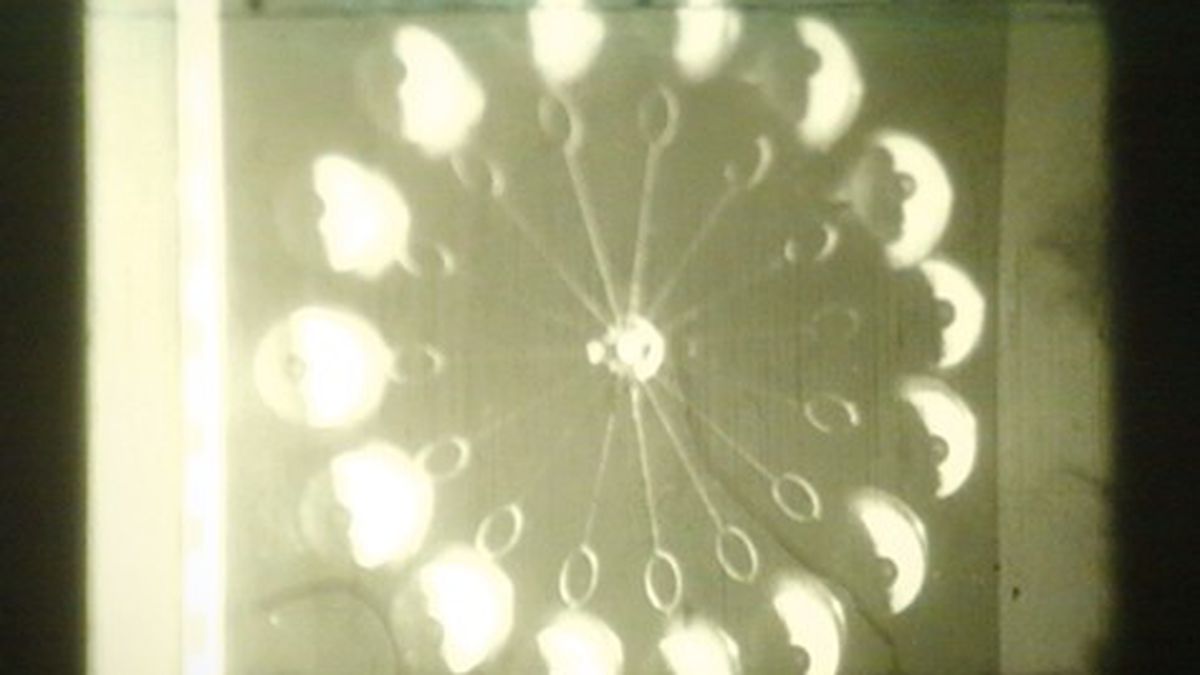 Inside the Cinematic Void

As the sun set on Sunday night, City Limits gallery hummed with heavy noise, physically vibrating from the low frequencies deployed for local artist Tooth’s most recent performance as Arc. Attendees rested their heads on the gallery floor, enveloped by the oppressive bass and subdued into a dreamy state by herbal fumes. With every window blacked out, the gallery seemed subsumed by a temporal void.

At one end, a makeshift lantern illuminated a colorful grid. Tooth paced in near darkness, agitating a metal disk (a piece of old film editing machinery) with a bow to evoke alien screeches. Eventually, he lit up a wall with homemade films that flickered with imagery at a near incomprehensible pace: circular patterns, moon cycle diagrams, pulsating water, mesmerizing colors, and windows of light crossing each other to form what looked like an X-shaped portal. The “experiential installation,” as Tooth introduced it, was active for nearly two hours.

A few days before the performance, Tooth sat in the gallery (300 Jefferson St., Oakland) at a long table covered in strips of film — more were strewn on the floor surrounded by reels and rows of circular forms from various cultures printed in black and white on large sheets of paper. Books on alchemy sat stacked by the window, and a row of mirrors lined one wall. He’s had a residency at the gallery since mid-April, which means his practice had consumed the space.

The weekend before, Tooth had done a performance at the Lab, an experimental venue in San Francisco, which partially probed his experience of synesthesia — a rare condition that causes stimuli to activate multiple cognitive pathways. Most commonly that means seeing colors when hearing sounds or reading certain words. For Tooth, it’s more tactile: Upon seeing a specific color or hearing a certain noise, he’ll experience unusual bodily sensations. Fingering strips of colorful film, he explained that his performance work began in part as a personal investigation of his condition but evolved into a more general inquiry into the nature of perception.

But two days before the Lab performance, Tooth realized that he had misplaced the film. So, he stayed up for 48 hours recreating it — a kind of endurance test that characterizes his work.

First, he stripped an industrial film — in this case, Short Course on American Economics — of its emulsion by soaking it in a mixture of water and bleach. Then, he Xeroxed color swatches onto the clear strips and painstakingly spliced them together. The colors, which were the same ones that decorated his lantern on Sunday, came from a chart in Thought Forms, a 1901 book by Annie Besant that brought the phenomenon of synesthesia to the popular consciousness. The original chart described what colors typically evoke what emotions. “I wanted to make a film that was specifically about the neurological effects of shifting colors and light on the body,” he said.

At both City Limits and the Lab, Tooth did not so much use film as a means of representation, but rather as a medium for creating an atmosphere. As he put it, film is a “tool for performance.” Throughout his screenings, he typically brings the image in and out of focus by placing his hand over the light source — the ultimate transgression at traditional cinematic events — creating a kind of fleeting durational light sculpture.

In addition to his impromptu manipulations, the films Tooth makes are often materially ephemeral, too. “You literally can’t repeat it, because it’s falling apart in front of you,” he said of his most fragile creations. “You forget sometimes that film is a live event.”

To say that Tooth is a cinephile barely begins to characterize his relationship with the art form.

Proving it’s more than merely a means of creating a moving image, Tooth uses film like a dancer employs movement. He’s not a storyteller. Rather, he composes situations — using projection, found-object installation, and often noise music — then intuitively activates them in the moment via performance. For him, performance is a kind of occult practice that can make immaterial forces momentarily visible.

Outside of performance, Tooth is best known as the shadowy figure behind Black Hole Cinematheque, a screening series run out of a warehouse in West Oakland that sometimes features full-length films but most times is a slideshow of found footage accompanied by live music. Years ago, Tooth received more than 1,000 reels of archival footage from Rick Prelinger, the East Bay film archivist and historian who founded the monumental Prelinger Library, now owned by the Library of Congress. He’s an incredibly prolific longtime fixture of Oakland’s underground film and music scene, but he has the rare tendency to appear in fine art settings as well. Doing a performance at a museum one night, then at a living-room noise show the next isn’t unusual.

But Arc is the part of his practice that’s at the center of his residency at City Limits and the umbrella under which most of his performances fall. Through Arc, he’s interested in relinquishing authorship by “collaborating with machines.” As he put it: “I’m putting things into process, but I’m not always responsible for the outcome of what happens. … Arc is an experience that I may have more of a hand in putting into place, but that we’re all influencing and experiencing as it happens.”

For Tooth, the performances require falling into a trance that he’s constantly attempting to intensify. He described a past performance where he repeatedly dipped his hands in lighter fluid and set them ablaze while tightly clamping a razor blade against his tongue. But with his City Limits performances — there will be another one on Friday, May 13 — he’s testing himself with duration instead of danger. He aims for his culminating performance to be at least four hours long.

As far as what it will entail, Tooth wouldn’t say — except to ensure that it will differ from the first. He couldn’t reveal it in part because he can’t predict it himself.

“Nothing is ever finished until it happens with these kind of things.”