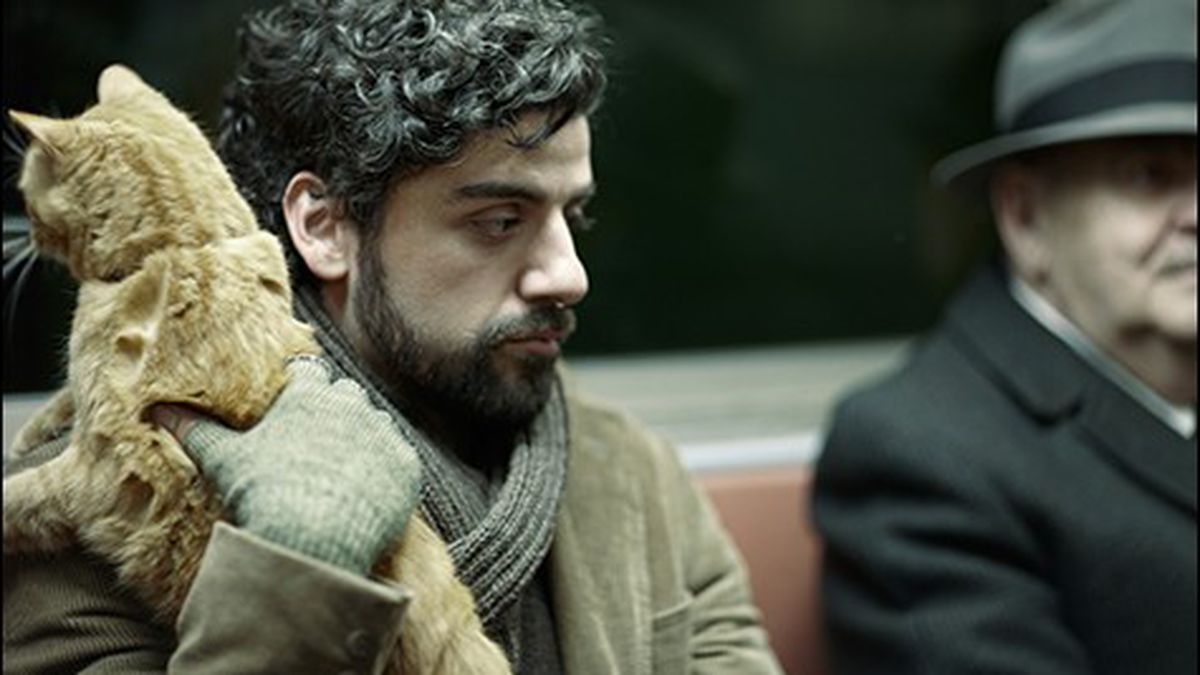 It takes a Village.

Once upon a time folk music was cool. That was in the early Sixties, a time wedged in between Chuck Berry/Elvis Presley’s early rock ‘n’ roll and the British Invasion, a niche era in which the Coen brothers’ resplendent Inside Llewyn Davis takes place. It’s a niche filled with wonderfully eccentric characters who traded their beatnik bongos for Martin guitars, playing coffeehouses and living the bohemian life in a Greenwich Village of the mind.

Our window into this world is Llewyn Davis (actor and singer Oscar Isaac), a soulful-eyed, bearded journeyman — in more ways than one — who performs murder ballads and sea chanteys in a warm, intimate voice at the Gaslight club while working recording dates, waiting for his big break. Llewyn has his buddies, but truth to tell he’s something of a prick, heckling fellow artists from the audience, trash-talking with bookers, borrowing money all over New York, etc.

His sometime-girlfriend Jean (Carey Mulligan, in a fiery acting/singing parlay), a folkie chanteuse who’s part of an act called Jim and Jean, has evidently had a belly full (literally, in her case) of Llewyn’s tomcatting and responsibility-dodging. But when he tucks into his guitar and sails off on “The Bonny Shoals of Herring,” all is forgiven. He’s a man with a rhyme, a couch surfer and lost-cat-chaser, former merchant marine and unrepentant gabber, making the scene in 1961, spinning poetry in the chill night air, somewhere on the road.

The beauty of Ethan and Joel Coen’s scenario is that everyman Llewyn, who can function as the ideal doppelganger for real-life folk heroes like Tom Paxton and Dave Van Ronk — the Coens reportedly based the character on Van Ronk from the beginning — is more of a Ghost of Folkies Past, the phantom musician who was always part of the fabric but who never made it to the next showbiz rung like Bob Dylan, and then faded away. Isaac is simply magical as this ephemeral but utterly familiar character — he has the voice, the musicianship, the look, the comic comebacks, the stormy attitude — we can spot Dylan’s tantrums from Dont Look Back as well as Van Ronk’s legendary drunken onstage rants. Llewyn’s song for his ailing father at the hospital recalls the fabled real-life meetings of Dylan and his idol, Woody Guthrie, as a sort of mythical shadow play, something for which no knowledge of folknik lore is really necessary. But if you happen to know the story, Llewyn’s singing breaks your heart.

Hooray for the Coens’ and T Bone Burnett’s care and tenacity in getting the music right. They seem to be trying to rekindle a folk music campfire in the same way they did for bluegrass with O Brother, Where Art Thou? Hope it works. At any rate, it’s reassuring that A Mighty Wind is not the last word on the phenomenon. And if somehow millennial curiosity seekers can stumble upon the likes of Van Ronk, Liam Clancy, Joan Baez, Ewan MacColl, the New Lost City Ramblers, Odetta, John Fahey, and Bob Gibson — to name just a few — all the better. Inside Llewyn Davis is an exceptionally warm, very personal thank-you note to the perennial corner of Bleecker and MacDougal and all kids with guitars. It takes a Village.