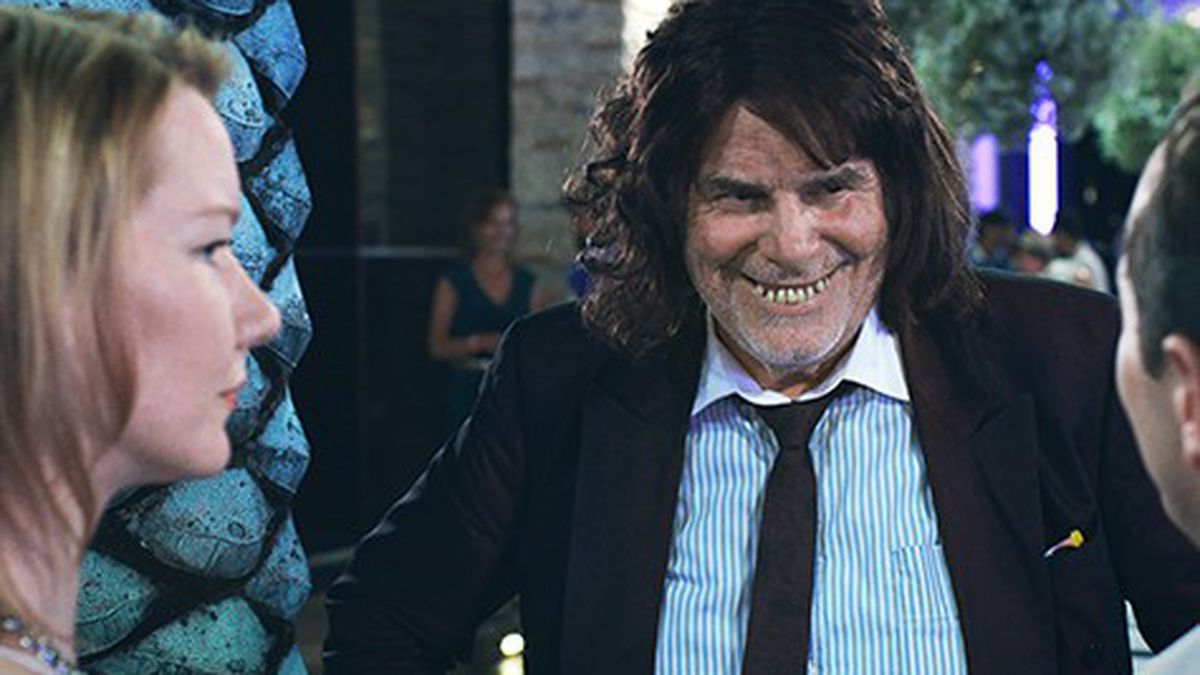 In Toni Erdmann, The Sandpaper Is Coated With Honey

If you spotted him at a bus stop, or even worse, noticed him following you down the street, you’d probably want to call the cops. When he’s “in character,” Winfried, the subject of Maren Ade’s Toni Erdmann, gives off distinctly weird vibes. In his ill-fitting black wig or simply wearing a pair of “overbite” fake teeth, the hulking, middle-aged man (played by actor Peter Simonischek) gives every indication of being seriously unhinged — especially when his adult daughter Ines (Sandra Hüller) is in the vicinity.

There’s a method to Winfried’s madness. As a dedicated, lonely single father with time on his hands, he craves more interaction with Ines, who works as a public relations consultant in various European locales. As a matter of fact, Winfried disapproves of Ines’ buttoned-down corporate existence, but can’t seem to pry her loose from her job long enough to talk her out of it. So he resorts to other means.

That involves trying on wigs, false teeth, odd costumes, even a full-body Bulgarian hairy-behemoth outfit, and then barging in on his daughter at the least appropriate moments — to him, they’re the most appropriate — in order to shock her out of her destructive lifestyle. In one of his guises he adopts the persona of “Toni Erdmann,” a smooth-talking (or so he thinks) party animal, and chats up women in cocktail lounges. Ines is naturally embarrassed by her father’s foolish antics, but, in the time-honored screwball-comic tradition, puts up with them long enough for director Ade’s screenplay to follow them into a bounty of awkward situations in Romania and Germany. A few reviewers have likened Winfried/Toni’s provocations to the work of the late performance artist Andy Kaufman. Shemp Howard, the “fourth Stooge,” is more like it.

Ines is not without foibles of her own. Aside from her abundant nervous tics, she’s in the habit of making unhealthy choices in romantic companions — such as the date who gets his kicks ejaculating onto a plate of petit-fours during a love session. As corporate as Ines tries to be, eventually her father’s gags — or could it be something in the genes? — begin to have an effect on her. They crash a random family’s Easter egg party and sing Whitney Houston’s “Greatest Love of All.” And then there’s the film’s piece-de-resistance, Ines’ “come naked or not at all” birthday party. Filmmaker Ade stages these tableaux not so much for their minimal slapstick frisson but for the maximum discomfort of all concerned.

Austrian-born actor Simonischek, a veteran of German-language TV and movies, is positively termitic in the title role, gnawing away in the corner of practically every scene in the film and just barely staying on the right side of the line between burlesque comedy and shameless physical buffoonery. Hüller, meanwhile, does more with Ines’ quiet desperation than it at first appears. It takes us half the running time to recognize that the daughter is every bit as nutty as her dad.

Chalk that up to Ade’s easy familiarity with the absurd, in service of a feel-good-by-feeling-nutty scenario. The director’s careful observation of the stress between middle-class conventions and reality has been seen before, in her drily comic 2009 character study Everyone Else (Alle anderen). In that outing, the sandpaper-y irritations that turn bland people mean are on display in the story of an unhappy couple on vacation. In Toni Erdmann, the sandpaper is coated with honey and the protagonists only want to prove they’re right, on their way to ultimate family happiness. Keep that in mind when Winfried/Toni is lumbering through the park in his furry abominable snowman outfit.