.In Search of West African Soul

A Taste of Africa's new brick and mortar spot serves the best Cameroonian food around. You just have to be patient. 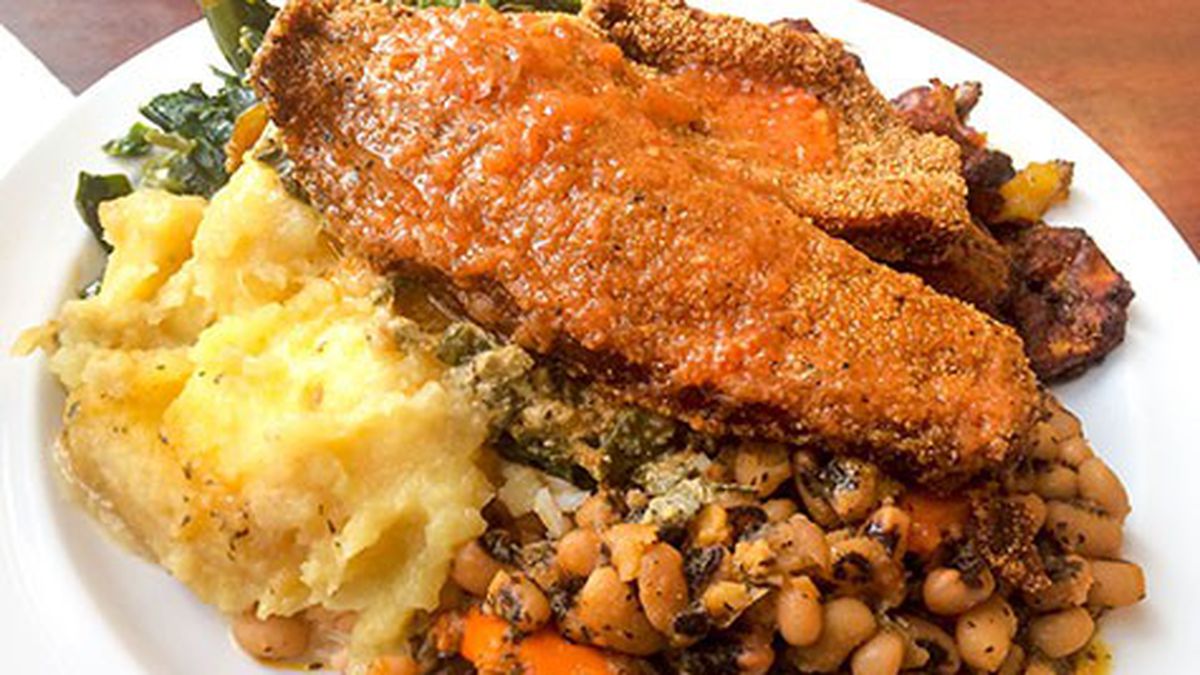 Even self-professed East Bay food experts might forgive themselves if they haven’t heard of A Taste of Africa — Malong Pendar’s Cameroonian popup/catering business/on-again, off-again restaurant that recently reemerged at a new brick-and-mortar location in the Bancroft-Fairfax district of East Oakland.

Pendar has been around for what seems like forever (or as close to forever as most popups ever get), yet has mostly escaped notice by the somewhat insular world of Bay Area food blogs and restaurant PR flacks. But ask a random dude in line at a downtown Oakland club where Pendar happens to be slinging plates of fried tilapia and fragrant jollof rice, or one of the ladies hawking jewelry at the Ashby Flea Market, where the Bay Area native has been a weekend fixture since the early Nineties, and there’s a decent chance he or she will tell you this: that Pendar makes some of the most delicious food you’ll find anywhere in the East Bay.

I’m a believer — a semi-regular customer when Pendar used to pop up at the Adams Point bar Room 389 on Tuesday nights, and the joyful eater of a second dinner whenever I stumbled upon his makeshift Cameroonian food stand at some event around town.

Just by virtue of the fact that he now has a spacious kitchen and actual chairs and tables to offer dine-in customers, Pendar’s new digs are a step up from the popup and catering gigs that have been his main focus since his first Taste of Africa restaurant in Berkeley shuttered in 2010.

Today, A Taste of Africa sits in a former Salvadoran-Mexican restaurant that still has its old “El Mio” sign up. The only thing identifying the place as an African joint is a propped-up wooden board — painted a bright red, green, and gold. In short, everything about the restaurant has that same improvised, fly-by-the-seat-of-your-pants feel as Pendar’s popups — which is the generous way of putting it.

A less generous way would be to say that your patience might be tested. On a slow weeknight, it might take forty minutes for your dinner to arrive. And on a busy Friday, it’s possible that you’ll show up at the restaurant only to find that Pendar has no recollection of the takeout order that you put in twenty minutes earlier. And so only then does he begin to prepare your meal — very slowly, very meticulously. Each plate is made up of six or seven distinct components, and while Pendar can’t possibly be cooking each one to order from scratch, it certainly feels that way.

Still, I never felt annoyed for very long. In part, that’s because of Pendar’s infectious enthusiasm. Behind the counter, he flashes a winning smile and says that while there is no written menu, he’s happy to explain everything verbally. And at your table, he asks if you’d like to taste the prawns he’s cooking for you, to make sure they have the proper spice level. (They were perfect.)

Anyway, once your meal finally arrives, all is forgiven. Because, truth to God, this really is some of the tastiest, most deeply satisfying food that you’ll find in Oakland.

If you’ve never tried Cameroonian food, or West African food in general, the closest reference points are probably Caribbean cuisine and certain soul food dishes. Ordering is easy because, at least for now, there’s usually only one option — a combination plate, topped with your choice of meat.

The base of the meal is five or six vegetable side dishes: well-seasoned, pilaf-like jollof rice; toothsome black-eyed peas; fried plantains that were perfectly crisp at the edges; and, next to those, a pile of sautéed collard greens — the most mild element on the plate, but perfect in their fresh simplicity. Gingery mashed yams seemed impossibly decadent and buttery considering that they’d been cooked with no butter at all, but rather coconut milk. On top of everything was a big scoop of ndole, the peanut-spinach stew that is Cameroon’s national dish — a kind of vegetable slurry with a scrambled egg-like consistency. It imbued everything on the plate with a delicious, savory juiciness.

The exact makeup of the plate varies a little bit from week to week — there might be red beans instead of black-eyed peas, or sautéed spinach instead of collards. But the basic elements are the same. I’ve made the comparison before, but the food reminds me of Thanksgiving — something about the abundance of the plate and the wonderful co-mingling of sweet and savory, and how the vegetables wind up stealing the show. Of course, none of the Thanksgiving dinners I grew up eating featured anything as potent as Pendar’s deadly and incredibly delicious habanero hot sauce: One visit featured a deeply smoky version the color of dark red wine; another variation had a fresh, bracing ginger bite.

Everything on the basic combo plate is vegan, even the dishes that aren’t normally served that way in Cameroon. But the meats were no slouches either. The chicken — thigh meat stewed until very tender — was classic ladle-over-rice comfort food. Tomato sauce-drizzled fried tilapia had a subtle smokiness that I loved. My favorite was the delicate prawns, spiked with just a prickle of habanero heat.

You also get a sense of Pendar’s penchant for experimentation in a dish that he calls the “Afrito,” a West African take on a burrito: a spinach tortilla wrap overstuffed with rice, beans, ginger yams, spinach, and a choice of meat. In truth, this was too unwieldy to be eaten burrito-style, without a knife and fork, and the flavors skewed a bit sweet. I wound up wishing I’d stuck with the combo plate.

A Taste of Africa has been in soft opening mode for a couple of months now, and I have the feeling that Pendar is still hedging his bets. The restaurant is closed on weekends so the chef can keep up his catering and popup gigs, and even the posted hours — limited as they are — aren’t very reliable. (I’d call ahead.) Meanwhile, the restaurant’s website promises all kinds of alluring delicacies that haven’t yet made it onto the menu: black-eyed pea fritters, puff-puff (beignet-like African doughnuts), steamed pumpkinseed pudding, and fish pepper soup.

To pull all of that off, Pendar will probably need some help — after all, A Taste of Africa appears to be, for all intents and purposes, a one-person operation. Call it a slightly improved version of the popup, then, with a fixed location and food that is better than ever for having been cooked fresh to order. That, in itself, is something to feel thankful for.