Following a strongly-worded letter sent late Wednesday from Oakland Athletics co-owner Lew Wolff in which he threatened to move the team and said that he had the blessing of Major League Baseball, the Oakland-Alameda County Joint Powers Authority (JPA) approved a ten-year lease to keep the team at O.co Coliseum. The vote was 6-2 with Oakland Councilmember Rebecca Kaplan and city representative Aaron Goodwin voting no. The Oakland City Council and Alameda County Board of Supervisors must also approve the deal in the next few weeks. 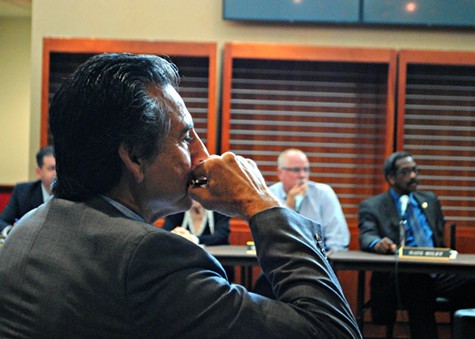 A change in tenor was evident for Thursday morning’s special meeting. Six days ago, an action by the Oakland City Council barring two of its members who sit on the JPA from attending, along with two other absences, ended the meeting before it started due to a lack of a quorum of five members present. The impetus for today’s vote, however, came when A’s management upped the ante Wednesday night, asserting that Major League Baseball would allow the Athletics to temporarily move if the lease deal was not approved by this Friday. City and county leaders then blinked.

Some members of the JPA who oversee the publicly owned O.co Coliseum and Oracle Arena, including Alameda County Supervisors Nate Miley and Scott Haggerty, had previously supported the lease deal, which was fourteen months in the making. “Frankly, it gives (the Athletics) a strong incentive to stay here and build a long-term future,” said Miley, noting the team’s decision to buy new scoreboards. “I believe this deal is good,” said Haggerty. “I believe in my heart this deal is good.” He added that Major League Baseball and sports fans across the country were watching the JPA’s actions today. “We need to know when to claim victory.”

Oakland officials had balked at some of the deal’s terms, including the fact that it allows the A’s to pay less rent each year over time, and it forgives a $5 million debt that the A’s owe the city and county in back rent. Officials also contended that it does not contain large enough penalties against the team if it were to opt-out early from the deal. Oakland’s Interim City Manager Henry Gardner also questioned a deal point that the A’s demanded: a requirement that the developer of Coliseum City make a $20 million non-refundable deposit on the venture. Wolff, however, later agreed to lower the amount to $10 million — after he had said emphatically that he was done negotiating.

Mayor Jean Quan said in an interview that the A’s and Major League Baseball had “bullied” the JPA into agreeing to the deal with the threats of moving. She noted that the lowered rent payments will cost the city and county about $6 million over the life of the ten-year pact. And that’s on top of the $5 million in rent payments that the city and county agreed to forgive. The A’s plan to use the $5 million to buy a new scoreboard, but the deal allows the A’s to keep all advertising revenue that comes from ads inside the Coliseum — even from ads during Raiders games, concerts, and other events.

“For what it costs for about two players, they threatened us,” Quan said. “It’s outrageous. … It’s outrageous bullying.” Quan said she does not think the city council will approve the deal without concessions from the A’s.

There is no timetable for when the A’s lease deal will come before the council or the Alameda County Board of Supervisors, but will likely occur before the end of this month.

After the JPA’s vote, Oakland Councilmember Larry Reid said he did not feel bullied by Major League Baseball. “They made it clear to us that with the failure of this lease agreement, after the end of the two-year extension, they will allow the team to relocate outside the City of Oakland,” said Reid. “So, I didn’t get on the city council to allow the A’s to leave, but to keep them here. And to vote on this lease agreement, if that helps, I was willing to take the flack from members of the council.” Despite the council’s direction to its members on the JPA to vote against the lease deal at today’s meeting, Reid said a procedural rule in the city charter allowed him to defy council’s orders if pertinent new information is subsequently received. In this case, Wolff’s letter Wednesday threatening relocation.

Meanwhile, Oakland Councilmember Rebecca Kaplan, who along with Haggerty took a central role in negotiating the lease, followed her colleagues’ wishes and voted against the deal. Later, Kaplan’s spokesman, Jason Overman, referenced the council’s direction in voting no, but reiterated she continues to support retaining all three of Oakland’s sports franchises, as well as seeking new stadiums for both the Athletics and the Oakland Raiders. Kaplan is also a candidate for mayor this fall.