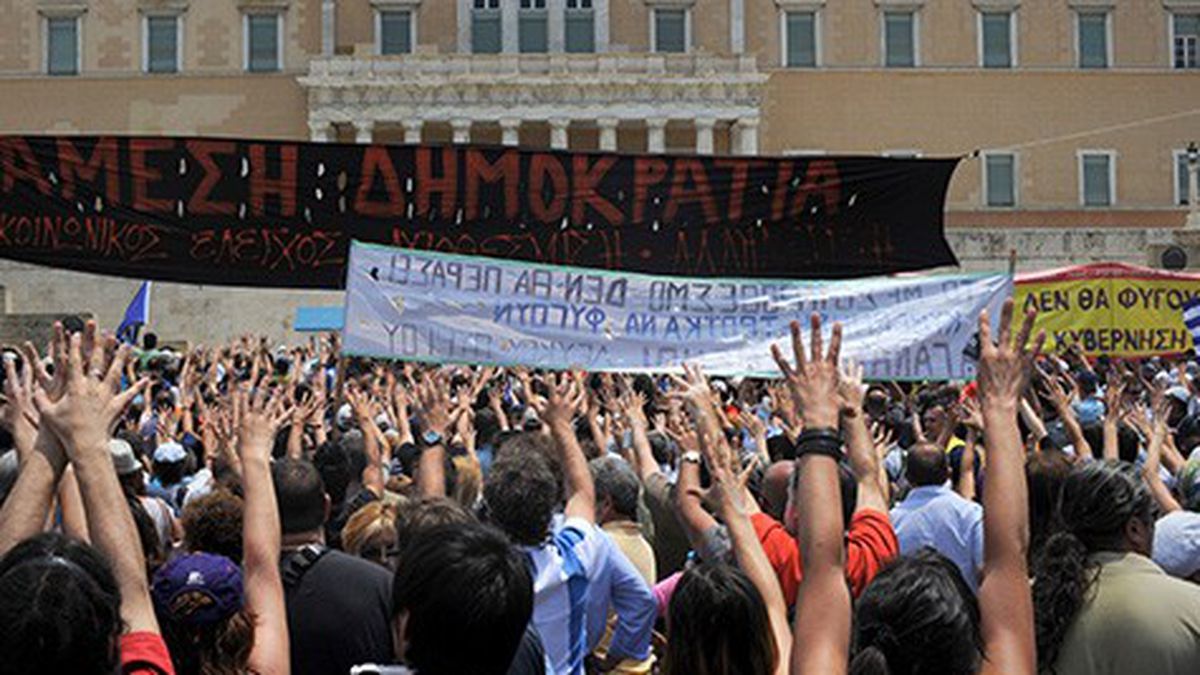 Why we should applaud their July 5 stand against enforced austerity.

The Greek people deserve our sympathy and support. Bankers and their politicians are putting the Greeks through the modern-day version of hell. Abused by Goldman Sachs, a conservative political class, and an economic theory of enforced austerity, Greece is on the frontline of today’s class war, a war fought with financial weapons, not guns. As Michael Hudson, a keen economic professor at the University of Missouri, has written, “Creditor financial leverage has become the 21st century’s new mode of warfare. It is as devastating as military war in its effect on population: rising suicide rates, shorter lifespans, and emigration of the age-cohort that always have been the major casualties of war.”

News outlets have been filled with stories of the financial crisis in Greece, and of deals and ultimatums and the future of the European Union. And there has been a consistent line in all the mainstream reports: Americans should be afraid, as the self-destructive actions by the lazy Greeks could crush our pensions and investments and destroy Europe.

The reality is much different. Americans should be concerned, but it is because the worldwide banking elite is trying to make Greece its “austerity laboratory.” In this laboratory, the needs of people are sacrificed on the Bunsen burners of financial fire.

In order to pay bankers for mountains of Wall Street-produced debt, ordinary Greeks have endured appalling humanitarian casualties this decade. Forty percent of Greek children now live in poverty. Half of young people in Greece are unemployed, and more than 50 percent of Greeks are not adequately fed, according to Greece’s Prolepsis Institute. The suicide rate is up 35 percent since 2011 and the number of miscarriages has doubled at some hospitals. HIV cases are up 200 percent since 2011. Prostitution in Greece has been increasing during the crisis. The BBC ran a chilling piece on a female doctor selling sex to supplement what is left of her medical practice. And yet the bankers want to make life even more difficult for Greeks.

You might ask, why should we think much about Greece, other than as empathizers or spectators? Foreign affairs often rightly seem divorced from our daily lives — unless our kid is being sent to fight. And unless we are told that terrorists are entering our shores, it is often hard to see the ping-pong of global events as making much of a difference to us personally. But the Greek situation is connected to our communities. The Greeks are facing the same basic forces that are stifling the ability of regular folks here to live free from economic fear. The Greek tragedy should be a clarifying moment for those in the East Bay or in Detroit or Puerto Rico who continue to suffer from Wall Street’s machinations. People are precious, not simply “human capital” to be expended at will.

Greece and its debt became the epicenter of Europe’s financial woes after the 2008 financial crisis. That crisis pulled back the wraps on a number of shady financial shenanigans that bear a remarkable similarity to situations in the United States, most notably in Detroit. For years, previous Greek governments, both “right” and “left,” played footsie with Goldman Sachs. In 2001, Goldman talked the Greek government into entering into dubious derivative deals, “swaps” deals like the ones we have seen in Oakland and other Bay Area locations, and which, as the Express has reported, we are still paying for (see, “Oakland’s Toxic Deal with Wall Street,” 2/15/2012).

In Greece, as reported by Bloomberg and others, the corrupt government at the time agreed to these complex derivative deals in order to allow it to hide the true extent of its debt. But the process ended up almost doubling the country’s debt burden, while returning an immediate profit to Goldman of more than $750 million. Lloyd Blankfein, the current head of Goldman Sachs, was in charge of the operation. The next year, Goldman hired Mario Draghi, who now heads the European Central Bank, the leader of that continent’s austerity-loving bankers. Not surprisingly, Draghi has blocked any investigation of Goldman’s role in this situation.

Inexcusably, even when a country attempts to satisfy global bankers who drown them with debt, as the Greek government has over the last few years, their best efforts fail. Why so in Greece? As The New York Times reported, “The bailout money mainly goes toward paying off Greece’s international loans, rather than making its way into the economy. And the government still has a staggering debt load that it cannot begin to pay down unless a recovery takes hold.” The unnecessary imposition of austerity measures suppresses economic growth, as economists such as Paul Krugman, Joseph Stiglitz, Jeffrey Sachs, and Thomas Piketty have written.

Another commonality for us is that in Europe and in the United States, the cheerleaders for austerity are the same. From the editorial pages of the Oakland Tribune to that of the Wall Street Journal and the Financial Times, blame for the Greek crisis has been put squarely on workers’ pensions, just as these same outlets carp about retirement plans in our communities. And when a people is being punished by the system, the system’s defenders pursue a racist or ethnic narrative. The Greeks, we are told, are just a lazy people, just as it was claimed that Blacks were responsible for the US sub-prime mortgage crisis. These false narratives must be rejected. Greece’s plight comes from the same forces that are responsible for the outsourcing of jobs from our country, the financial ravaging of our cities, and the lockdown of democracy through the establishment of national sovereignty-destroying global courts.

One casualty of this war of enforced austerity is the meaning of democracy. We know in the United States that democracy is teetering in the time of Citizen’s United. And democracy is hollowing out across the globe. As George Monbiot of the English Guardian newspaper wrote, “Consider the European Central Bank. Like most other central banks, it enjoys ‘political independence.’ This does not mean that it is free from politics, only that it is free from democracy. It is ruled instead by the financial sector, whose interests it is constitutionally obliged to champion.” In a memorable description of these bankers, Monbiot wrote, “Those sober, suited, serious people turn out to be demented utopian fantasists, votaries of a fanatical economic cult.”

The Greek situation is producing a democracy-defining moment for Europe. A few months ago, concerned that a victory for the Syriza anti-austerity party in Greece would “frighten politicians and investors,” a Financial Times headline read, “Eurozone’s weakest link is the voters.” It seems the only voters who matter are the investors and politicians. When the Syriza coalition won election, the European banking leaders essentially said, according to Michael Hudson, “If you do not re-elect a right-wing party or coalition, we will destroy your banking system. If you do not sell off your public domain to buyers, we will make life even harder for you.” That is what is happening now. It now appears that the Greeks are going to be forced to give up democratic sovereignty. Will the bankers take all their first-borns, too?

In spite of these threats, on July 5 the Greeks engaged in a valiant fight to reject the inhumane concessions being forced upon them by Europe’s financial elite. Plagued by increasing economic and social deprivation, the Greek people voted a resounding “No” to the choices begin given them by European bankers. Of course, the Syriza coalition was roundly condemned by the elite for even asking the people their opinion on how to deal with the crisis.

Greece will remain in austerity hell for many years, and there will be many political twists and turns for the European Union ahead. But the July 5 vote by the Greeks and their attempts to push back against austerity have the opportunity to be an Occupy moment. Those fighting against austerity in other countries in Europe have been emboldened by Greek actions. Pablo Iglesias, the head of Podemos, a Syriza-like party in Spain, said, “Europe is not destroyed because there are governments that have the courage to ask their people what they think. … What destroys Europe is the inability of country leaders to defend their citizens. … To defend the Greeks and their government today is to defend Europe’s dignity. Times change and very soon we will be the powerful.”

We now live in times in which a small act by a small number of people can give voice to the frustrations of the many. Progressive eruptions can move fast, as we have seen in the Confederate flag issue. But, whatever happens, bad or good, we should applaud the July 5 vote and the resistance by the Greeks. Win or lose, it was a resounding affirmation that the Greek people, like people around the globe, are tired of unneeded austerity.

Our patience is not going to last forever.

Best Local Politician: And pain in his colleagues’, uh, necks

The Oil Well Next Door