.How the Oakland Police Department Worked to Cover-Up Sex Crimes and a Home Invasion Committed by Cops 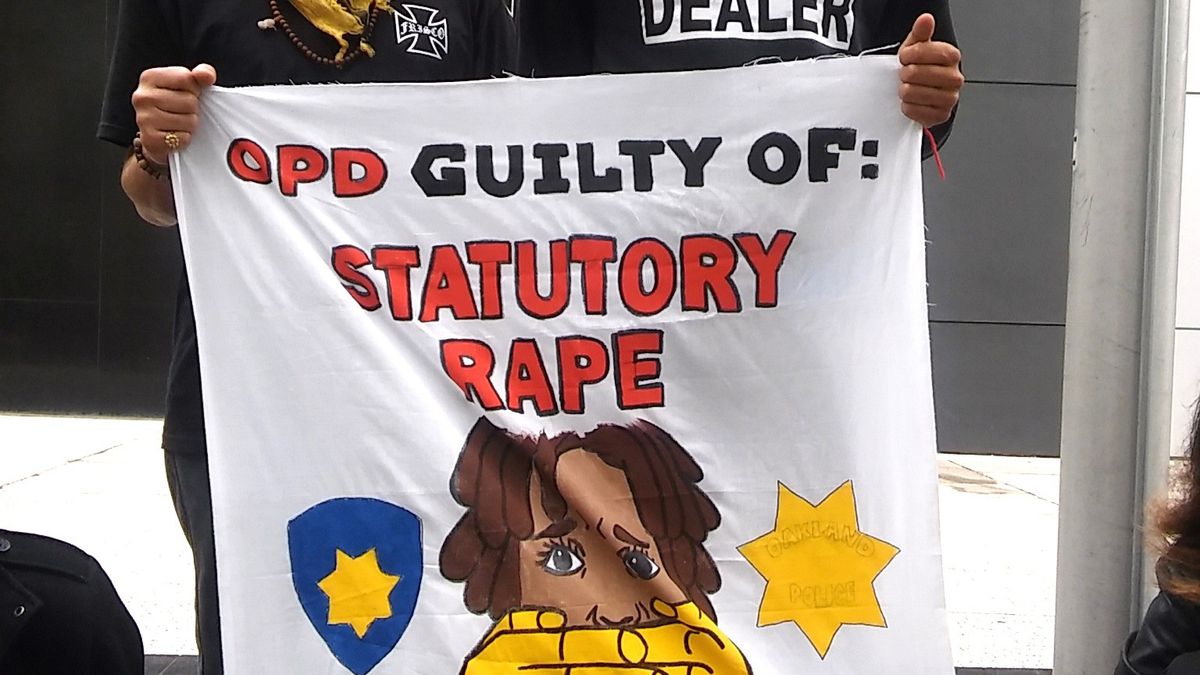 Over the past year, multiple Oakland police officers allegedly committed serious crimes, including statutory rape and assault. But the department kept each incident secret until whistleblowers leaked information to the press. And it also appears that OPD detectives, and even command staff, tried to deflect suspicion away from their colleagues, going so far as to pressure victims and witnesses to change their statements, bury internal complaints, and delay taking action against officers accused of criminal activity.

The most alarming case involves the rape of a minor.

Last year, on the of evening September 25, OPD rookie Brendan O’Brien was found dead in his apartment in the Oakland hills. The 30-year-old had a pistol in his hand and a self-inflicted gunshot wound to the head, according to the coroner’s report.

It’s unclear why O’Brien killed himself. But police sources say he left a suicide note denying that he had sexually exploited the underage daughter of an Oakland police dispatcher, who goes by the name Celeste Guap. He wrote that OPD officers Terryl Smith, Giovanni LoVerde and James Ta’ai also were innocent of the same allegations.

O’Brien’s suicide and his note caused two internal investigations to be opened. Neither progressed very far.

The first was conducted by OPD homicide detectives: Several days after O’Brien’s death, Guap says a homicide investigator contacted her by telephone and took her to the downtown Oakland police headquarters for questioning.

“It was two detectives and a cop who looks like President Obama,” Guap explained in an interview with the Express. She later identified the tall Black officer who appeared to be in charge of the investigation as Lieutenant Roland Holmgren, who runs OPD’s homicide unit. Holmgren, a department veteran, worked with the Riders in West Oakland as a rookie and was part of a narcotics team implicated in the beating death of Jerry Amaro in 2000. He was also a supervisor for one of the “Tango Teams” that fired tear gas and less-lethal projectiles at Occupy Oakland demonstrators in 2011 and 2012.

“They asked me about relationships I had with other officers,” Guap said about her interview with the detectives. She says the homicide investigators specifically asked her whether she ever had sex with recently retired OPD Captain Ricardo Orozco and rookie Giovanni LoVerde. The two were mentioned in text messages apparently recovered by homicide investigators from O’Brien’s cell phone. Guap told them she hadn’t had sex with Orozco or LoVerde.

Guap told the Express that the homicide detectives said they were going to treat any statement she made as a lie. “I didn’t hear from homicide again after that,” Guap said.

Several weeks later, Sergeant Millie Oliver with OPD’s internal affairs division called Guap. According to the victim, Oliver asked her similar questions as the homicide detectives: about whether or not she had ever had sex with Oakland cops, and how old she was when it happened. Oliver also specifically mentioned officers LoVerde and Ta’ai. Guap said she denied everything during the interview.

But, later, Guap became upset. She called Oliver back a few days later and asked the sergeant, “What can I do to make this all go away?”

According to Guap, Oliver asked her if any police officers were pressuring her to lie about events that might have occurred. Guap told her no, only that she simply wanted the case to be closed.

“The last phone call was around October 10,” Guap said about her questioning by internal affairs.

At this time, however, several other people had information confirming that OPD officers sexually abused Guap when she was 17.

For instance, Chief Sean Whent’s wife, Julie Whent, chatted over Facebook with Guap in June 2015, and Guap told her that she had been “dating” an Oakland police officer since February. And according to Guap, in September of last year she told Sergeant Leroy Johnson that O’Brien had sex with her when she was still underage. Guap also told the Express that other OPD officers knew who she was and what had happened to her when she was 17.

But Guap said OPD never contacted her again after the initial interviews immediately following O’Brien’s suicide. Months went by. No officers were placed on leave.

It’s unclear what the status of the internal affairs investigation was during this time, but multiple sources inside the department, who requested they not be identified for fear of retaliation, said that OPD leaders buried the case and hoped that Guap would disappear.

During this time, Guap — who was exploited as a child sex worker on the streets of Oakland for years — turned 18. As an adult sex worker, she continued to meet up with Oakland cops and officers from other agencies. They had sex with her in their personal cars, in parks, at hotels, and at other locations. Some of the officers leaked her confidential information about prostitution stings.

Then, on March 15 of this year, Guap and OPD officer Smith got into an argument, according to text messages Guap provided to the Express. In one message to Guap, Smith threatened to commit suicide, writing “I’m going to kill myself now. You did it again … I hope you feel good 2 for 2. Your [sic] the devil.”

According to text messages, Guap shared Smith’ suicide threat with OPD officer Luis Roman, who texted Guap that she should contact OPD immediately and have them conduct a welfare check on Smith. Guap then called OPD’s non-emergency number but no operator picked up. In desperation, she called internal affairs and told an officer about Smith.

It was around this time that Independent Monitor Robert Warshaw, who oversees OPD’s compliance with court-mandated reforms, became aware of the stalled rape and sexual-misconduct investigation involving Guap and multiple current and former officers.

And then, on March 23 — eight days after Guap called internal affairs about Smith — U.S. District Judge Thelton Henderson issued a stern order that the internal affairs case opened the previous year after O’Brien’s suicide was being mishandled. The judge handed the case over to Warshaw, who subsequently had OPD investigators report directly to him — not Chief Whent. Sources in the department said Whent was later forced out of his job because he allowed the Guap case to be covered-up.

On December 7 of last year, OPD rookie Cullen Faeth, his supervisor Sergeant Joseph Turner, and other officers had been drinking at Monaghan’s restaurant in Montclair. After leaving the restaurant, Faeth, who was wearing civilian clothes, somehow ended up at the home of Olga and Nemisio Cortez on a cul-de-sac in the Oakland hills. The young officer did not know the Cortez family, but police reports state that he proceeded to try to force his way into their home. According to a civil complaint filed by the victims, Faeth pounded on their front door and yelled “Let me in!”

Nemisio Cortez cracked the door open and told him to leave. According to the complaint, Faeth kicked him in the stomach, and the two began to struggle. While Faeth and Nemisio were wrestling, Turner appeared from the side of the house, and apparently pointed a gun at Olga Cortez from under his shirt, according to the family’s claim.

As she ran back toward the house, Faeth tackled her to the ground.

At this point, neighbors arrived and, along with Nemisio, pinned Faeth to the ground until uniformed OPD officers showed up. Faeth reportedly stank of alcohol and had a wild-eyed stare.

Turner wasn’t detained at the Cortez’s house that night and his name does not appear in the police report. He fled down the street, and according to neighbors, left the scene in an unmarked vehicle after speaking with still-unidentified Oakland police officers who were first to respond. The unmarked vehicle, and the person driving it, have yet to be identified by OPD.

The police report, obtained by the Express through a Public Records Act request, includes a six-page narrative describing the incident — but the entire narrative was redacted by OPD.

Later that night, after responding officers took witness statements and left the scene, the family says a sergeant, a captain, and a police officer knocked on the Cortez’s door and asked them to explain what happened.

According to the civil complaint, the officers were trying to get Olga to “change her statement and relay the events in a way that would be more favorable to the man who was arrested.” Olga claims the officers tried to get her to downplay Faeth’s attempt to break into her home.

The complaint reads: “An officer tried to convince Mrs. Cortez to change her story and relay that the first man was simply knocking on the front door, instead of the reality that he was banging, rattling the door, pushing the door and demanding entry. The officer was also trying to get Mrs. Cortez to say that the first man simply knocked her over while falling down, instead of the reality that the man put both arms around her in a bear hug and knocked her to the ground.”

During the two weeks after the incident, the Cortez family received no further information about their case, despite repeated calls to OPD. Rumors in the neighborhood and among OPD were already swirling that the assailants were Oakland cops.

Previous ArticleBurger Boogaloo Was Rad. Here Are Some Pics.