.How the East Coast (Sausage) Rolls 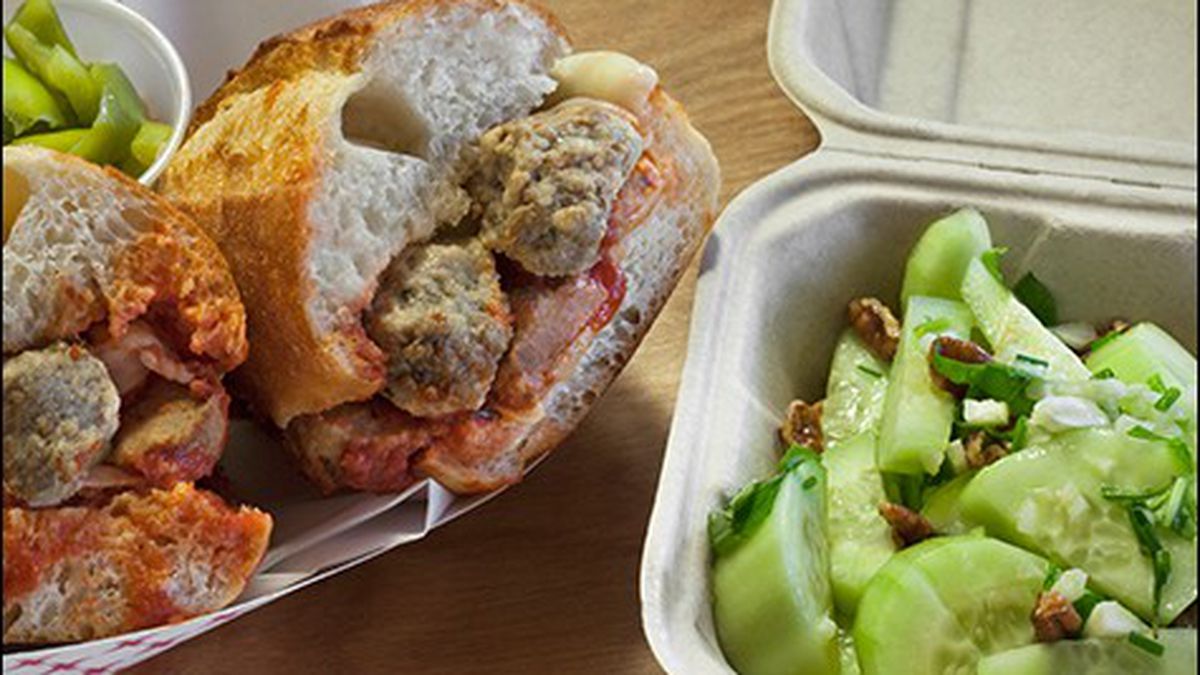 Folks who live in the Grand Lake neighborhood must be thrilled about how their food fortunes have turned, with several legitimately great options cropping up in the past year or two.

The latest restaurant to join the area’s food revival is humble in appearance: Located two doors down from the Grand Lake Theater, the Modigliani Cafe is just a tiny slip of a sandwich shop, with stools for maybe twelve diners at two bar counters and a decidedly unsexy commercial kitchen that takes up half the space. It’s a cash-only, predominantly takeout kind of place.

As befits the shop’s name, the mustard-yellow walls are lined with the odd, angular portraits of Italian painter Amadeo Modigliani, who is owner Gerry Mogg’s favorite artist — someone he associates with quality and uniqueness, which is what Mogg says he would like to achieve at the restaurant. And by and large, he’s done just that. Mogg and his chef, Daveed Cruz, have created a menu of unpretentious, East Coast-inflected Italian-American cooking — six sandwiches (plus a daily special or two), two salads, and a few milkshakes. The main attraction is the sausage roll, a pizza-sandwich hybrid with roots in the Youngstown, Ohio area, where Mogg is from — not quite the East Coast, but east by Ohio standards, at least. In Youngstown, I’m told, every deli, convenience store, and pizzeria sells pepperoni rolls — calzone-like dough pockets that are stuffed with cheese and pepperoni. In Modigliani’s version, they’re filled with bulk sausage.

Mogg, a sausage maker by training, makes a classic Italian pork-shoulder sausage, layers the meat with mozzarella cheese on top of thin New York-style pizza dough, and then rolls everything up tightly before baking. The result — a bargain at just $6.50 — is vaguely burrito-like in appearance and offers the flavors and the pleasures of a next-level Hot Pocket: fennel seed-studded pork; oozy cheese; and paper-thin dough that’s both toothsome and surprisingly delicate. On the side, you get a little tub of brightly acidic pickled green-pepper slices (for crunching) and another of Mogg’s East Coast-style house-made tomato sauce (for dipping).

Indeed, the excellent tomato sauce — rich, hearty, and slightly sweet (“like my Nana made it,” Mogg said) — is the foundation for the cafe’s best sandwiches. My other favorite was the meatball sandwich, which came loaded with basil-flecked, pecorino-cheese-infused, pink-centered meatballs that had a great, light-but-not-insubstantial texture. A Semifreddi’s roll, a healthy drizzle of red sauce, and a layer of melted mozzarella completed the shirt-stainingly saucy package — a “three-napkin meatball sandwich, maybe four,” as Mogg put it. For the price, you won’t find another meatball sandwich in the East Bay that’s as good.

The open-face eggplant parmesan sandwich, which Cruz served as a special one day, was also delicious — perhaps the best I’ve had on the West Coast: eggplant (long slices cooked soft and sweet), tomato sauce, and melted cheese melding together in perfect harmony.

The other sandwiches on the regular menu, all variations of panini, were perfectly fine but didn’t quite live up to the aforementioned red-sauce-laden delights. The steak panini featured thin slices of roast beef, cheddar, pickled peppers, and a hint of horseradish, but I would have liked a little more kick. And Modigliani’s version of a Cuban sandwich (roasted pork, ham, Swiss cheese, pickles, and mustard) was just okay — too much mustard, and the pork too lean and dry.

The best sandwich was the vegetarian version. Staying true to the restaurant’s Italian-American red-sauce roots, it was piled high with eggplant, zucchini, roasted red bell peppers, tomato sauce, and mozzarella. A generous slathering of garlicky house-made pesto sauce put it over the top.

Even the salads were better than what you’d expect from your typical hole-in-the-wall sandwich shop. A cucumber salad came studded with crunchy candied pecans, shaved fennel, and slivers of fresh basil. The dressing, made with white balsamic vinegar, was mellow and sweet without being cloying. The tomato and tri-pepper salad featured generous chunks of feta cheese and a bracingly refreshing balsamic vinaigrette.

If you’re feeling decadent, wash your sandwich down with one of the cafe’s old-fashioned milkshakes, which, despite being made with run-of-the-mill ice cream, were satisfying in a diner-y kind of way. The strawberry shake — made with fresh strawberry sauce — tasted just the way strawberry ice cream ought to taste. The off-menu mocha shake, which had a splash of espresso and little flecks of chocolate, was even better.

A meatball sandwich and a milkshake is the kind of gut-busting lunch I’d only recommend if you have time to take a nap afterward. Which is to say I highly recommend it.

The tradeoff with a tiny bootstrap operation like this, however, is that it lacks the amenities of a typical sit-down restaurant. You might need to wait a few minutes before anyone takes your order, and when the line gets long — right before a movie is about to start, for instance — the service can get downright hectic. For takeout orders, a separate container for salad dressing would help keep it from all sloshing out en route.

These minor quibbles notwithstanding, Modigliani Cafe gives folks another great dining option in the Grand Lake neighborhood. Until recently, the space had been occupied by a dimly lit coffee shop perhaps best known for the fact that moviegoers were allowed to bring its char-grilled sausages into the Grand Lake Theater.

Sadly, Mogg said he hasn’t worked out a similar arrangement. Now, I would never advise you to sneak outside food into a private business establishment, but if you were the kind of scofflaw who would do such a thing, one of those sausage rolls would probably make for the best movie theater snack ever. Exercise your own conscience.