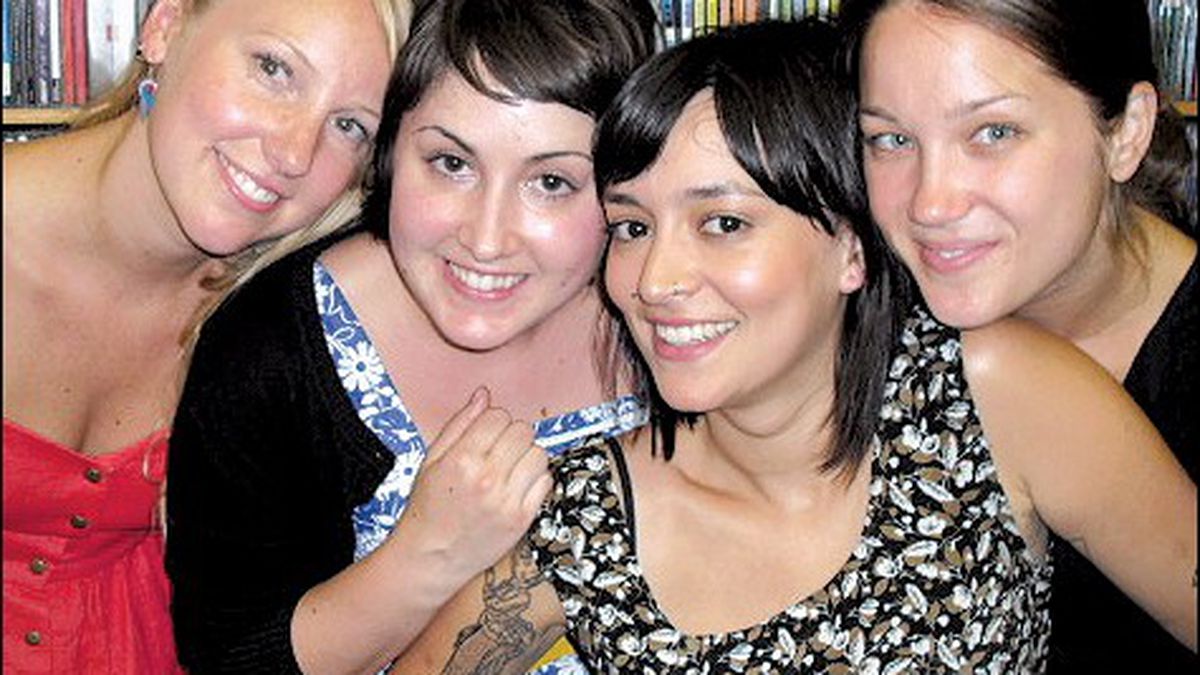 The Hot Toddies are cute, and a little demure. Both attributes work to their advantage. Performing at Berkeley’s Amoeba Records last Tuesday, the femme four-tet attracted a sizeable crowd: scruffy hunks and their middle-aged counterparts, personalities from local radio stations, girlfriends who marveled that the Toddies’ apparel matched the primary-colored Amoeba logo on the stage curtains. “So we want to play a song called ‘Boys on Bikes,'” said guitarist Erin Skidmore, as the group launched into its fourth song of a thirty-five minute set. “It’s about those hot young men you see riding around on the streets.”

Someone in the audience made a gurgling sound. Skidmore simpered. The Toddies played a rousing version of their requisite surf-rock song, a minor-key send-up to San Francisco messengers — the ones wearing jeans that look like tights, as they note in the tune’s opening refrain. Flirty and cheeky, it’s more an ode to neighborhood bars than to the boys who frequent them. The Toddies name-check House of Shields and the popular Mission district haunt, Zeitgeist. Skidmore and bassist Heidi Bodeson harmonize on a perfect fifth interval. The whole song hovers on two chords. “That was one of the last songs we finished writing for this album,” said drummer Sylvia Hurtado. In fact, she added, the lyrics are pretty literal. “We like boys, and the boys on bikes are always a little cute with their little hipster pants.”

Cutesy, kittenish lyrics are kind of a necessary evil for an all-female rock outfit, particularly one whose members met at the behest of (or because of) current and former boyfriends. But that’s only a small slice of the Toddies’ repertoire. Despite the pretty patina, this band has a sense of humor about itself. Band members make insider references, lard their music with innuendos, and drink Pabst Blue Ribbon throughout their sets, wherever possible. Like most women of the millennial generation, the group’s members are feminist-ish, but won’t burden themselves with being torchbearers. They exploit the girl-group concept, but aren’t married to it. And yet, they still hark back to an older tradition.

Girl groups of the 1950s and ’60s weren’t prepackaged, or manufactured by producers. Rather, they formed out of high school or church choirs, whose members had often grown up singing together. Often the singers were sisters, or cousins, or best friends. They’d come up on the same block. They listened to the same records, teased their hair the same way, and gossiped about the same boys. They squabbled. Their sha-la-la ooh-wa-ooh harmonies had an earnestness that seemed uncontrived, and endearing. The Hot Toddies have a similar girlfriend-y quality. Skidmore and Bodeson met at UC Berkeley, and started the group as a duo. Both had taken piano lessons as kids, and taught themselves guitar and bass as adults. They played their first shows at house parties, using electric bass and guitar — so the music didn’t sound too singer-songwritery. After releasing one EP, they decided to recruit a keyboardist and drummer.

“The prerequisite was like, ‘Can you drink and party?'” Hurtado recalled. “Okay, now you should learn how to play an instrument, and we’ll fake it.”

Indeed, Hurtado says she barely knew how to hold a pair of drumsticks when she first met Skidmore and Bodeson. She learned the craft quickly, by spending one summer sequestered in a cabin with her drummer-boyfriend, and a set of traps. Keyboardist Jessica Wright was the final edition. She joined the Hot Toddies a day before the group’s first photo shoot. They signed to the South Bay label Asian Man Records, and released an inaugural full-length — called Smell the Mitten — in 2007. The name said it all: Bawdy, smart, Ronettes-style music from four women who grew up in the era of all-age punk clubs and Sassy Magazine. And their music commanded a smart listenership. Song titles on the first LP ranged from tongue-in-cheek (“Sugar Daddy,” “Wet Dream”) to cheekily cerebral (“HTML,” “Photosynthesis”), to intentionally highbrow (“Anaïs Nin Vs. the Pirates of Santa Cruz”). Hot Toddies ran the full gamut of girlhood and geekiness.

And it sold. Asian Records founder Mike Park said he pressed up three thousand CDs for the first album. It also did fairly well online, reeling in a couple hundred a month through iTunes, which, Park decided, is more than adequate for a DIY mostly known for ska and punk. The band’s closest peers might be the Japanese girl groups Softball and Akiakane, which spawned from more of a punk rock tradition. While Park professes to be an ardent Toddies fan, he’s not a huge promoter of the doo-wop sound per se. Nor will he treat this latest hit as some kind of social phenomenon. “There’s no political agenda in terms of like, the feminist movement, on our behalf,” he said.

The Toddies don’t have an agenda, either. And according to Skidmore, they didn’t grow up listening to Phil Spector records. Rather, they embraced the girl-group sound by accident. “I grew up listening to a lot of punk and ska music,” said Skidmore, who also sang in various choirs at Head-Royce School in Oakland. “But I don’t sing, like a dude, you know? I can’t yell. Somehow we just got started singing lots of harmonies.”

Those shoo-wap shoo-wap harmonies are a big part of the Hot Toddies’ appeal. They don’t exactly create a wall of sound, but their music is always full and consonant. Not to mention most of it occurs in two parts — sometimes four. And a lot of snark lurks just beneath that slick surface. The Toddies’ new album, Get Your Heart On, includes an ode to ugly male bathing suits (“Max’s Mankini”), a ballad about an imaginary, wheat-intolerant sweetheart (“Celiac Love Song”), and a bilingual, French-English song about a lonely, outdated computer (“Ordinateur Ordinaire”). They even made a song about vampires (“Keep on Runnin'”) to coincide with Twilight.

Park ambitiously pressed up five hundred copies of Get Your Heart On, in addition to a thousand CDs. And by the looks of the Amoeba crowd, he’ll soon be ordering a second run. The band members are equally optimistic, and ready to flaunt their success — in the form of matching Hot Toddies tattoos. That’s perhaps their one concession to girl-power politics. Hurtado is the only member who currently has tattoos — her arms are decorated with purple zig-zags, a Victorian mermaid, and a big diamond. She says she would totally add band insignia before brandishing the name of her future husband. Skidmore agrees.