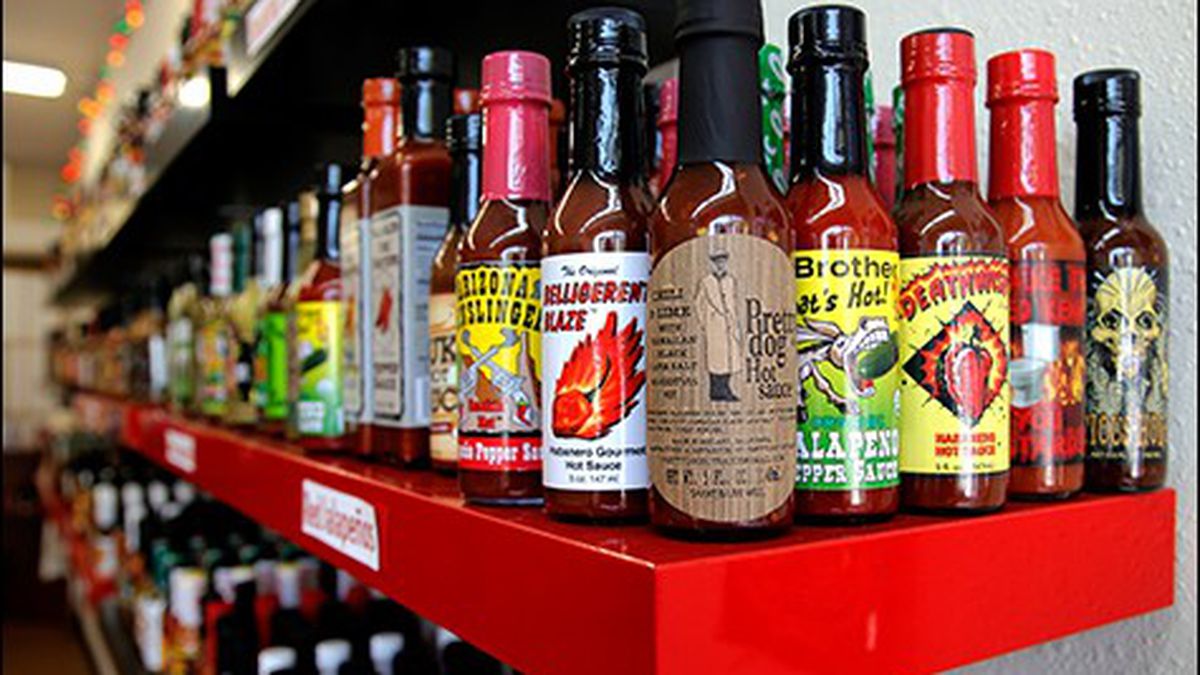 With his thick shoulders and tattoo-covered arms, Scott Zalkind could be an intimidating guy — if he weren’t smiling all the time. This is a man who obviously loves his life, and he’ll gladly tell you why he’s so happy. On February 15, 2012, he left his comfortable corporate position to throw all his savings into starting a small company. If you’re lucky, he’ll give you a sample of his labor of love, Lucky Dog Hot Sauce.

Throwing away the security of a full-time job to make something as niche as hot sauce may seem risky, but it turns out that Zalkind’s timing was perfect. He started his hot sauce business the same year that market research company IBISWorld called it the eighth fastest-growing industry in America, coming in just behind self-tanning businesses and Pilates studios.

Bay Area foodies have picked up on the national trend with characteristic enthusiasm. Hot sauce reflects the cultural diversity of the area — and the adventuresome tastes of its residents. It’s fairly simple to make with local ingredients, allowing manufacturers to give their sauce a bit of that eccentric Bay Area personality. “For me, I like the dance that it does with my taste buds,” Zalkind said. “It transforms the food into an experience.”

Just because hot sauce is trendy doesn’t mean business is easy, however. Most days, Zalkind works sixteen hours, delivering his sauce in an ’89 Dodge minivan that he inherited from a friend. He maintains a low-key approach to advertising and sells the hot sauce himself at four different local farmers’ markets.

Most of his ingredients are locally sourced, which is an important part of his business model. In fact, he is a member of a board that ensures farmers’ market vendors that claim to have local products aren’t greenwashing their labels for profit.

“I don’t need to put peppers on a truck and bring them from Texas if I have peppers growing twenty minutes that way,” he said. “I happen to be blessed to be in a state that grows the best effing produce. Why wouldn’t I use local produce?”

There is an entire section carved out for local hot sauces at HEAT, a Berkeley store that specializes in the fiery condiment. If you’re brave enough to stand in front of the sample bar at HEAT, co-owner Becky Gibbons will point you to the locally made sauces, which, on a recent visit, included flavors from Lucky Dog Hot Sauce (even some discontinued flavors), Oakland’s Pretty Dog Hot Sauce, Palo Alto Firefighters Pepper Sauce, and Humboldt Hotsauce.

“When people realize there are more than just the ones you find at Safeway, some growth [in the industry] will come from big guys losing their share in the market,” said Gibbons.

While these sauces may be locally sourced and produced, many of their flavor influences are international. John “CaJohn” Hard, the self-proclaimed godfather of hot sauce, attributes part of the latest trend to the ethnic diversity in the United States. “We’ve had a lot of Asian influence and a lot of Latin influence in our country. They brought a lot of those spices with them,” he said. “What you are seeing coming fast are these foreign-influenced hot sauces.”

Gibbons — along with Dylan Keenen, her business partner and boyfriend — see this everyday. Some of HEAT’s customers are from Trinidad and Belize; they stop by the shop to get hot sauce from their home countries — sauces they can’t get anywhere else in the Bay Area. Keenen said that people will even find flavors of their homeland in some the locally produced sauces. Several of his customers have told him that the San Francisco-produced Bandar Spicy Mango Chili Sauce “tastes better than what their mom used to make in India.”

Despite its popularity, hot sauce still carries a stigma. “There is a lot of apprehension and a lack of respect for the product,” Zalkind said. “Hot sauce remains the hold-my-beer-and-watch-this food. It’s stunt food. It’s unfair.”

Countless YouTube videos show people eating ghost peppers — and then sweating, crying, turning white, and chugging milk to try to stanch the burning. Though Zalkind thinks these videos are not good representations of the hot sauce industry, they spark curiosity, adding fuel to the trend and ultimately helping his business. “It’s a joke — ridiculously hot extract sauce. But now that it is viral, it sort of paves the way for stuff that isn’t like that.”

With an expanding fanbase, hot sauce is no longer just about heat. Pretty Dog features flavors such as peppercorn with lime and lemon curry tarragon. It also sells a mole-style sauce with applewood-smoked sea salt. Though these seem like complicated flavors, Pretty Dog owner Peter Fikaris said he strives for a simple flavor profile, carefully choosing ingredients that complement each other.

Fikaris started making hot sauce several years ago while living with his grandfather who suffered from dementia. Because of his condition, his grandfather couldn’t stay focused long enough to watch a TV show or read a book, but he enjoyed working on and testing out homemade hot sauces with Fikaris. Together, they developed more than one hundred unique recipes. “You can get creative with it,” he said. “There are so many options — hundreds of different types of salts and peppers and spices and vinegars and fruits and vegetables.”

When Fikaris left the home kitchen and started his business, he picked twelve recipes to sell commercially, but had to cut that down to six to keep production profitable. He makes his hot sauce at Beauty’s Bagels during its off hours, and pays for the space in hot sauce. Fikaris uses a similar barter system with Oaktown Spice Shop, trading sauces for spices. “They have our back and we have theirs,” he said. “We all feed each other.”

His grandfather’s image is sketched on his hot sauces’ simple matte-brown label, which distinguishes it from all the other loud, glossy labels. “My label doesn’t have a volcano with babies shooting out of it on fire,” Fikaris said. The Pretty Dog label isn’t about scaring people. It’s personal and understated — a reflection of the new direction the condiment is taking.

Bay Area food enthusiasts want local ingredients prepared with a multicultural influence, while adding a new level of sensation — one that’s not necessarily subtle. “I want heat with flavor,” Julian Lloyd said as he walked into HEAT one sunny afternoon, grinning from ear to ear like a kid in a toy store. After taking a quick look at some of the bottles on the shelf, Lloyd and his friend made their way to the sample bar in the back. Trying different sauces on tortilla chips and by themselves, on glossy, foldable pieces of cardboard, Lloyd spoke as if he were sampling whites at a fancy wine bar.

“This one would go great with pork chops,” he said, after trying a Trinidad Scorpion pepper-based sauce sweetened with apricots and blueberries.

After the next sample, he turned to his friend and said, “This one, this one would be good with chicken — you know, grilled chicken, not fried. I really get the fruit from this one.”

The Bay Area isn’t satisfied with just Tapatío and Tabasco anymore. This is the new world of hot sauce.

Editor’s note: A previous version of this story mistakenly referred to Scott Zalkind’s business as “Lucky Dog House Sauce.” The correct name is Lucky Dog Hot Sauce. This version has been corrected.