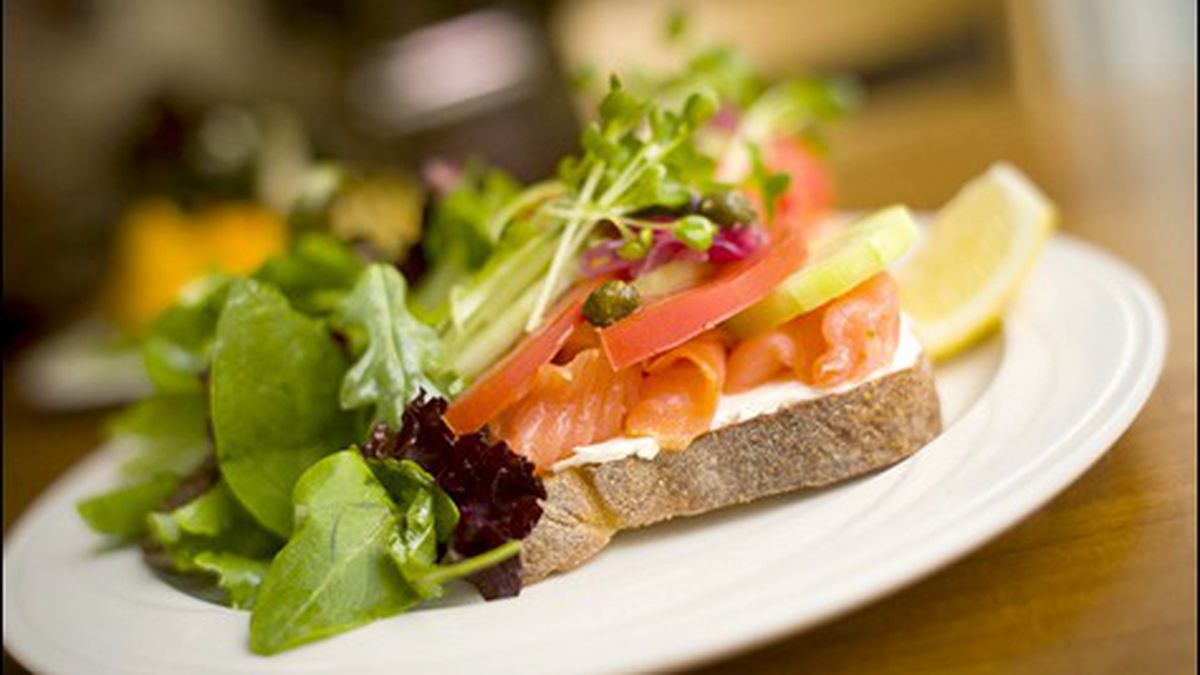 Hot and Cold at Kitchen 388

A search for warmth at the Oakland cafe yields both extremes.

Since moving from New York to the Bay Area, I’ve looked back on winter with the sweet sorrow of a complicated relationship. Sure, it often hurt, but the pain was interspersed with threads of warmth and relief. In this land without well-defined seasons (don’t kid yourselves), I miss sharp contrasts.

Thus when Oakland’s balmy October weather developed an abrupt chill, I headed to Kitchen 388. I may have missed this year’s Halloween snowstorm in the Northeast, but at least I could throw on a sweater and duck into a warm nook for breakfast.

On the surface, Kitchen 388 seemed exactly the type of place to counterbalance a steel-gray Saturday morning sky. A bright chalk sign on the sidewalk dangles the promise of fresh-baked pastry within. A couple of outside tables, bedecked with marigolds and savories in mason jars, cozy up to a heat lamp. Inside, little touches continue the illusion of warmth: a hand-drawn menu board, a bustling open kitchen, dog treats, and jars of house-made preserves. I only wish my first impressions held up.

Standing in line for counter service, I rubbed my hands together like an old prospector, waiting for the indoor heat to hit me. I waited and waited; it never came. A scan of the house showed most customers still bundled up in hats and jackets. Combined with the room’s thin, diffuse lighting, the atmosphere couldn’t have felt colder.

Less excusable was the chilly service. Central to the charm of a small neighborhood cafe is a feeling of bonhomie, something not on offer during my first visit. Counter help was disinterested in answering menu questions, and servers were downright cold. Besides one smiley coffee re-filler, a sourness and fatigue poisoned the entire vibe.

The pop tart is Kitchen 388’s trophy item, with its singular buzz rivaling all the restaurant’s other press thus far. I sampled two, the Nutella banana and the strawberry cream cheese, and I get it. Steeped in butter, the feathery, delicate crust has the potential to scrub your memories of the dry, leaden store-bought variety. Except: They’re served stone cold. I understand this is a millennial riff on the classic, and I can’t expect an exact pop tart replica, but it’s a toaster pastry! The brittle outside and the pasty filling practically beg for a re-heat.

More successful was the butter-rich biscuit, generous in size but airy and light. Even more importantly, it was one of the few items that came out piping hot. Served with a pat of butter and a mini-cup of apricot citrus jam, this one showcases pastry chef Alicia Toyooka’s (formerly of Masa and Noe Valley Baking Company in San Francisco) dab hand with the oven.

Kitchen 388’s custard French toast took some odd turns. Each order comes with four challah pieces, stacked two by two. On the outside was a swab of the customary egg and cream, with vanilla custard inserted between the slices. I expected the filling of a Boston cream donut, but the barely sweet custard had the texture (and slime) of an undercooked scrambled egg, with no discernible vanilla notes. The challah was topped with sautéed pears and apples, a seasonal substitute for the berries we ordered. The fruit was served cold, which wouldn’t be so noticeable with small berries, but the large, chilled slices added a disconcerting sensation to the lukewarm entrée. Pomegranate seeds finished the dish, a pretty flourish that didn’t add much.

The salmon tartine was attractive and flawlessly prepared, layering thin strips of smoked salmon on toasted Semifreddi’s levain, as well as cream cheese, pickled red onions, thick cucumber and tomato slices, and capers. The frittata was likewise well-executed, a cheddar, leek, and spinach blend with a light, smooth consistency and a perfect spring to each bite.

I left the first visit largely dissatisfied; a few menu winners couldn’t make up for an overall feeling of malaise. My second visit, on a sunny weekday afternoon, had a different feel. The staff had perked up, sun streamed through the skylights, I wasn’t shivering. Plus the lunch items were more consistent.

The opening carrot-orange soup was perfect fall fare. Slow-cooked onions were puréed with carrots, orange rind, chicken stock, and juice, finished with parsley and a dollop of sour cream. Rich and silky, without excessive acid or salt, it inspired a friend and me to battle for the last sips.

The butternut squash and Kamut salad was a gorgeous spectacle, piled high with goodies like crisp roasted kale, shredded coconut, mixed greens, sautéed carrot cubes, and grilled onions. Rivulets of house-made harissa and charmoula coursed through the farro-like wheat grain. Besides the over-roasted squash cubes, this was an ideal seasonal salad with Middle Eastern accents.

Thin-sliced eggplant was served on a toasted levain sandwich, with roasted peppers, caramelized onions, whole pitted olives, tomatoes, and a spicy house-made hummus. This one had good texture and Mediterranean cohesion, but the grilled eggplant was served perplexingly cold (continuing the theme).

Kitchen 388 also makes a mean pulled pork, served on a little easy-grip French roll. The slow-roasted pork was served on the chunky side, but was tender enough to dissolve with barely a touch of the tongue. The sweet sauce wasn’t overpowering, balanced by an acidic cilantro-lime slaw.

I sat at an outdoor table for the second visit, affording a lovely view of a “neighborhood in transition.” I’d heard loose talk about Adams Point’s renaissance, though a quick scan of neighborhood businesses showed it’s still in its earliest stages (Round Table Pizzeria and Grand Express Liquor and Grocery loom large). But if the hood does maintain an upward trajectory, Kitchen 388 is well-positioned to play a central role. As long as it can ratchet up the warmth a few notches.

Phantom of the Opry