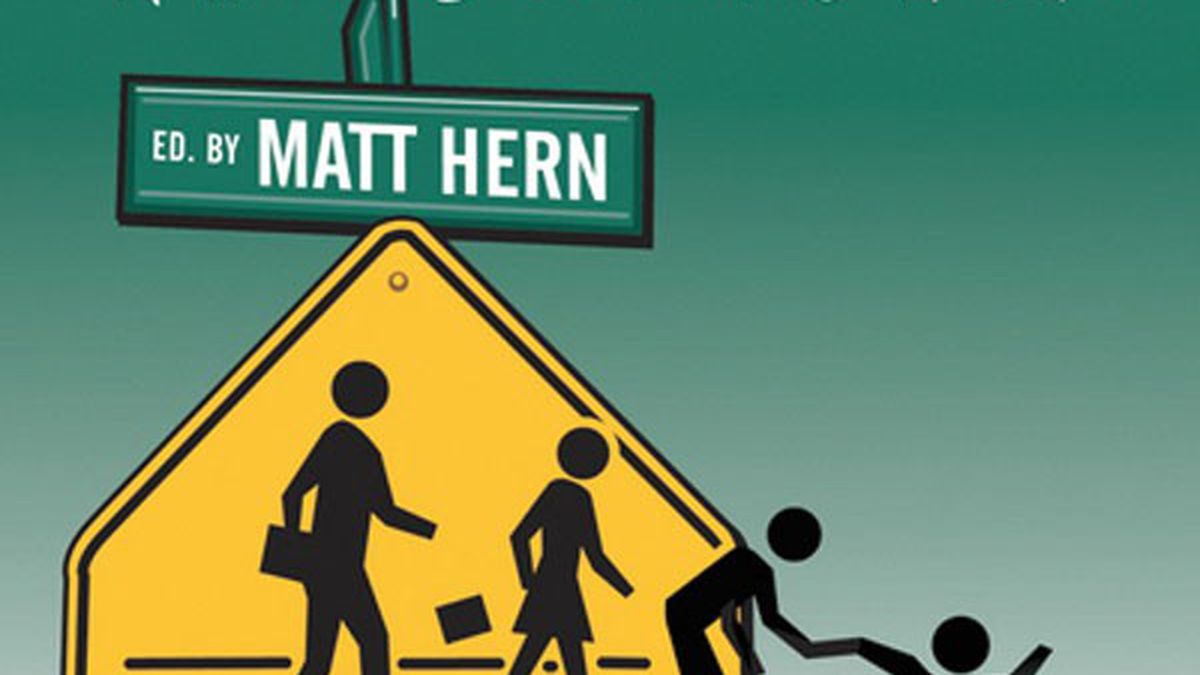 What if hating school was actually a social movement? Well, it is! School is bondage, we are told in Everywhere All the Time: A Deschooling Reader, newly reissued by Oakland’s anarchist AK Press. “Compulsory schooling is a tyranny,” asserts one contributor. “Today our social environment is thoroughly polluted by education,” avows another.

Gross-out cartoon parodies of the literary kanon komprise Johnny Ryan’s The Klassic Komix Klub, new from Oakland’s Buenaventura Press. “I have the world’s skinniest Chef Boyardee in my feces,” says someone in Siddhartha. “Swastika shit is my favorite tropical treat,” declares Robinson Crusoe, gobbling swastika-shaped dung. (Ryan’s booklets from which this is compiled were immensely popular within the comix community.) Ryan also renames the novelists he parodies. Haruki Murakami is “Harooky the Gooky.” Bold!

Comix go all academic in Krazy! The Delirious World of Anime + Comics + Video Games + Art. New from UC Press, it’s the companion to an art exhibition at the Vancouver Art Gallery. Relax and enjoy richly hued images by dozens of famous names such as Otomo Katsuhiro, Art Spiegelman, Lynda Barry, and Nick Park. And/or learn about lesser-known figures such as Christian Marclay, who, uh, tears sound-effect words out of superhero comics and glues them down to make collages (such as Visssh! and Shtoom). And Marcel Broodthaers, who, uh, takes photographic slides of comic-book scenes. “Broodthaers points to the traditional cultural hierarchies between images as a product of the museum’s values, with images and words being the means by which those values are disseminated,” we read. That explains that.

Say It in Slovene

“Orange” and “catamaran” are loanwords from Tamil. Uzbek has subject-object-verb syntax, agglutinative morphology, and noun cases, but no gender. Spoken by married women only, a special subform of Zulu “is a so-called avoidance language, as women have to avoid using words that sound like the names of any of their close male relatives.” New from UC Press and edited by Peter K. Austin, One Thousand Languages: Living, Endangered, and Lost is an enthralling world tour of the spoken and written word. It’s partly a eulogy: By the end of this century, Austin tells us, as many as 90 percent of the 6,800 languages currently spoken worldwide will have totally disappeared.

Tens of thousands of undocumented Oaxacans call this “Oaxacalifornia,” writes KPFA radio host David Bacon in Illegal People: How Globalization Creates Migration and Criminalizes Immigrants. “Migrants from Guatemala don’t yet call their Midwest communities Nebraskamala, but there are enough living in Omaha and surrounding meatpacking towns to make such a nickname inevitable.” Rather than deportation, Bacon urges “a new definition of citizenship.” Because migrants yearn to migrate, “immigration policy should make that movement possible, instead of seeing everywhere the threat of terrorism. Freedom of movement is a human right.”

In Rev. Harry Louis Williams II’s novel Straight Outta East Oakland, Firstborn Walker’s college plans change after his best friend is shot with a hollow-point bullet. At the open-casket funeral, “there he lay, with a volcano the size of a fifty-cent piece blown straight through the middle of his forehead. The guy who took care of the body was a mortician, not a magician. The ugly black hole could not be covered up. It stared back at us like an unblinking third eye.”

Berkeley’s original gourmet ghetto (home of the Original Delicacy Store, Dwight Way Kandy Kitchen, and Owl Sandwich and Oyster Grotto) thrived circa 1900 on Shattuck Avenue at Dwight Way, where Southern Pacific trains dropped off commuters, Dave Weinstein writes in It Came from Berkeley: How Berkeley Changed the World, an illustrated treatise on B-town innovations from disability rights to the atomic bomb.

Then and Now and Then

“Not long ago a Presbyterian minister … whipped his three-year-old boy to death, for refusing to say his prayers.” Horrific, yet the toddler’s “torture was short and small in comparison to what the next ten years might have held for him if he had lived.” Is this a current news blurb? No, it was written in 1873 by Helen Hunt Jackson, whose dispatches about social issues then facing America are chilling. Berkeley’s Heyday Books has compiled them in A Separate Star, edited by Michelle Burnham. “Among the more ignorant classes, the frequency and severity of corporal punishment are appalling,” Jackson wrote. “During those scorching nights” she spent in a New York City tenement building, “every window was thrown open, and all sounds were borne with distinctiveness through the hot still air. Chief among them were the shrieks and cries of little children, and blows and angry words … it was hard to refrain from an attempt at rescue.”

A Matter of Taste

Cancer and its treatments can compromise the taste buds, draining much flavor from the already-bland restricted diets that many doctors recommend. Cooking for her dad as he underwent radiation therapy, chef Rebecca Katz developed a repertoire of tasty, nutritious, easily digestible, immunity-boosting treats. Find Bombay Beans, Cashew Creme, and other soups, side dishes, substitutions, and desserts in One Bite at a Time: Nourishing Recipes for Cancer Survivors and Their Friends, new from Berkeley’s Celestial Arts.

Another Matter of Taste

A woman savors fish eyeballs in Jana McBurney Lin’s novel My Half of the Sky, new from Walnut Creek’s Komenar Publishing. It’s the story of a young post-Mao Chinese woman struggling to balance traditional values with the chairman’s. “Crunch. Crunch. Crunch. Mother-in-law’s jaw moved up and down, the round shape of the fish eye visible inside her cheek.” A visiting Westerner turns the fish upside down, horrifying everyone. “We don’t flip fish,” intones our heroine. The Westerner protests: “You never told me about some silly fish-flipping taboo.”

If you liked Oceans Eleven, you might like Tiny Little Troubles, a new thriller by Oakland’s Marc Lecard. He calls it “my own take on the classic subgenre wherein a group of criminals gets together to knock over some improbable target.” In this case, the target is a nanotechnology startup. When he began the book, Lecard worked in a garage near genetic-engineering facilities and considered using that for material. But “infection is just not funny.”

Sometimes parties aren’t fun at all. In Oakland native Le’Jon April Johnson’s novel A Desolate Woman, seventeen-year-old Mara attends one, only to be raped by her best friend’s boyfriend. She winds up pregnant and HIV-positive. And that’s only the beginning.

A bright little boy summons a UPS cargo jet to rid his town of a book-stealing giant in Born to Read, a literacy-endorsing picture book for kids illustrated by Marc Brown and written in perfectly scanning rhyme by Oakland’s Judy Sierra.

While working at Apple in 1984, Alan Brightman realized that not only was the real world not built with disabled people in mind: “The world of the Internet, initially, was a lot worse.” He demonstrated this to Apple engineers by having them sit, “in front of the Macintosh they’d been instrumental in designing,” and telling them to “put your hands in your pocket, put a pencil in your mouth, and type a two-line memo.” Such observations fill Disabilityland, Brightman’s new book on the landscape of disability, illustrated with art created at the Richmond-based National Institute of Art & Disabilities (NIAD), now celebrating its 25th anniversary.