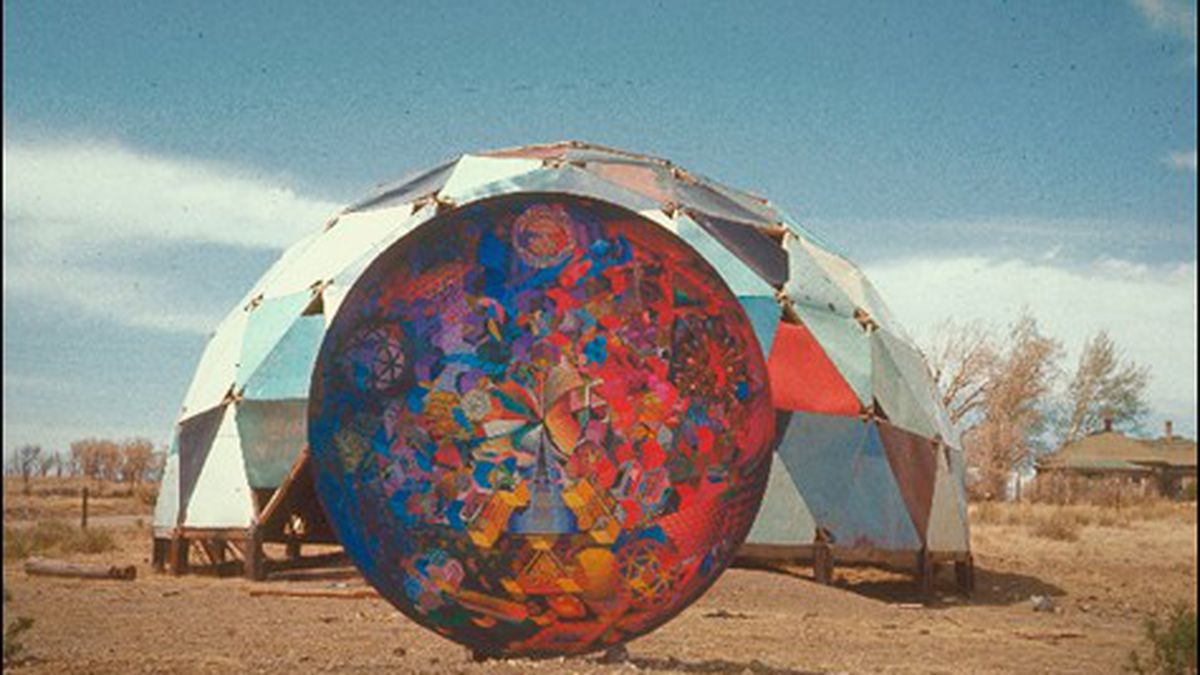 The exhibition at Mills College Art Museum features fascinating counterculture experiments that blended art and life, but unfortunately reads like a textbook.

West of Center, now at Mills College Art Museum, remembers the activities of seven experimental groups that operated in the American West between 1965 and 1977. Each consisted of young people who rejected postwar consumerism and bourgeois individualism in favor of collective living, Eastern-inspired mysticism, and the empowerment of marginalized groups. “Hippie” is the usual tag for the type.

Obviously, the hippie movement is far from an arcane subject. Yet, this exhibition renders the phenomenon curiously alien — a partial victory, as it turns out. On the one hand, West of Center happily eschews whatever psychedelic-styled caricatures probably come to mind when you think of “hippie art” and instead shows specimens that are more interesting — or ought to be. Unfortunately, the sense of distance is equally a result of the exhibition reading like an anthropology textbook. Not exactly a page-turner.

In keeping with hippie values, the exhibition replaces the typical centrality of the art object with the idea that the featured counterculture experiments were themselves a form of art practice. Indeed, for pioneering choreographer Anna Halprin, who headed the San Francisco Dancer’s Workshop in her Marin county home, or the inhabitants of Drop City, who built a community around geodesic dome architecture in the Colorado plains, or The Cockettes, a San Francisco-based theater troupe that engaged in perpetual performance involving harlequin, gender-bending dress, and often public acts, art merged with life to a degree that the two became indistinguishable.

Consequently, West of Center consists primarily of photographs, videos, publications, miscellaneous ephemera, and other secondary forms of documentation that portray these groups and their life-as-art ethos. At best, the result is rich and illuminating. The loftily ambitious Drop City, for example, summoned a documentary impulse worthy of itself; the photographs on display coalesce into a vivid gestalt of the isolated, idealistic community and its impressive habitations. On the other hand, the two vitrines devoted to Southern Oregon’s feminist collectives are almost repellently dry, modestly displayed as though to suggest that the chapter need only be skimmed.

There are exceptions to the documentarian format. Light show artists The Single Wing Turquoise Bird present “Invisible Writing,” a fantastically trippy, 2011 video in the style of their early work, complete with mysterious flashing glyphs and pulsing, streaming colors. The Drop City chapter includes “The Ultimate Painting,” a comparably psychedelic spinning wheel and strobe-light contraption that members of the commune created to visually monumentalize their belief in sacred geometry. Accompanying a section on the Ant Farm, another group devoted to experimental architecture, is a true-to-scale model of one of its signature inflatable pyramid shelters. Yet even standing inside the fluctuating plastic environment, one feels as though studying an artifact of a culture that vanished — or was vanquished — long, long ago.

All the Right Moves in The Dark Horse