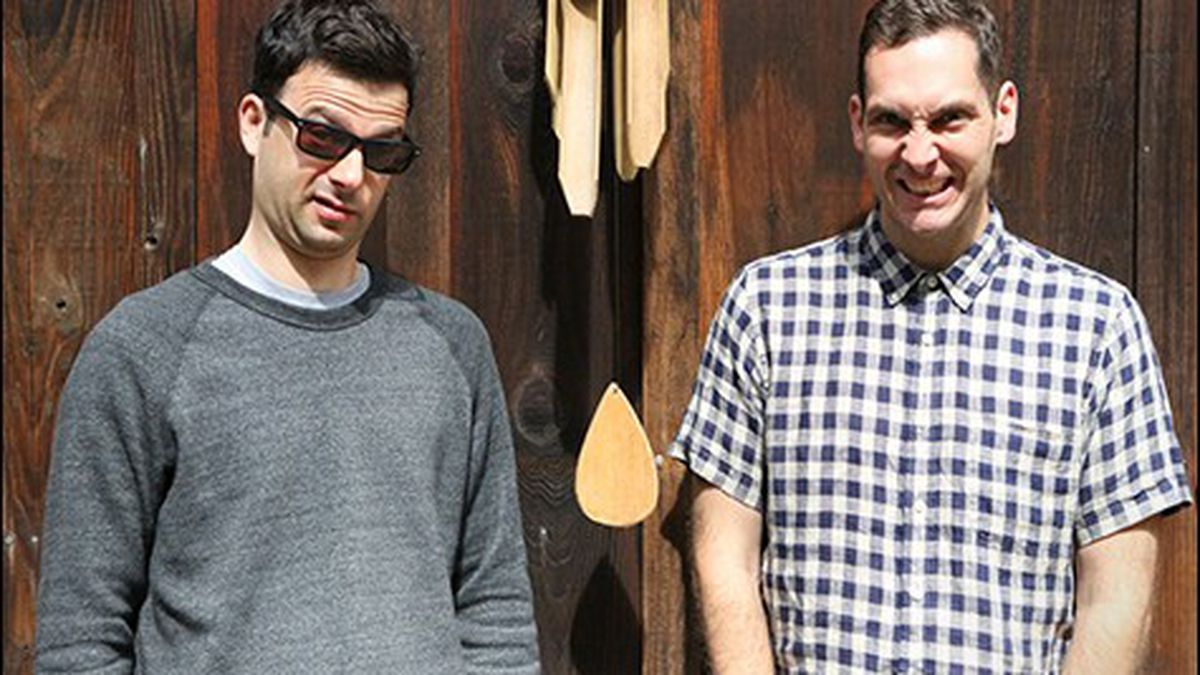 Up until a few weeks ago, I had never heard of Meanest Man Contest, although the local hip-hop-influenced duo scored a minor hit with its most recent (and first) album, Merit, which came out a decade ago. But now, I can’t stop listening to it — specifically, I can’t stop listening to “The Tenderloin.” It’s the first track on the group’s new album, Everything Worth Mentioning, and it’s satisfying and ear-wormy in a way that finds me compulsively playing it, over and over.

It begins with a looped synth line that sounds straight out of the Eighties, then a crisp, cracking drum beat enters, and emcee Eric Steuer launches into an enunciated rap: I’ve been around every side of this town from the silent to sounds like the crowd at a crime scene/fighting the clowns until I’m in the ground and I’m writin’ ’em down, I keep ’em around to remind me, he spits, in what sounds like one breath. It’s got a funky, hip-hoppy, synth-poppy feel, but then the chorus comes in, which is sung in a kind of sad breathiness, like an R&B crooner hung over from a cocktail of Prozac and Ambien.

It’s toward the two-minute mark that these distinct elements build and layer into something unexpected: a powerful, aspirational hook that touches something deep inside you.

I realize that sounds completely overblown, but this is what Meanest Man Contest is exceptional at — balancing earnest emotion, tongue-in-cheek humor, and irreverence for anything that genre purists hold sacred.

This results in an eclecticism that runs throughout Everything Worth Mentioning. “The Tenderloin” is followed “Takitani Edit,” in which a gloomy piano melody is looped atop what sounds like a stick gliding over the ridges of a guiro, or perhaps a clock being wound up, and Steuer’s spoken/sung rap: He was choking on the scenery — a diss on scenesters. Another highlight: “You Don’t Wanna Know,” a sad lamentation constructed out of a spare guitar melody, minimalist beat, and the crackle and hiss of a vinyl record. The gloominess that pervades these songs is balanced by a handful of thoughtfully constructed, somewhat more straightforward hip-hop tracks, the kind you might have heard on KALX’s Sunday Morning Show years ago.

But at base, the music doesn’t really fit any mold. If hip-hop is often associated with braggadocio, Meanest Man Contest might very well be the antithesis. Consider its name (a reference to the cutthroat, macho world of the first dot-com bubble), its lyrics (“The Tenderloin” was inspired by an alcoholic friend and the disenfranchised), and its members (who don’t dress or act like typical rappers, at least on the day I interviewed them).

Generally speaking, Steuer is the rapper, while his counterpart, Noah Blumberg, sings and comes up with the instrumental ideas (he used to play guitar in the local indie-rock band The Jim Yoshii Pile-Up), although the two stress it’s a collaborative process. Steuer is more of the talker of the two — his thoughts tend to stream out like an avalanche, as if he’d been storing them up all day — but he also seemed more self-conscious. Everything Worth Mentioning is mostly a compilation of previously released songs, which were subtly tweaked, in some cases with new vocals or added elements, and re-mastered. When asked whether it was hard to revisit and reimagine past works, Steuer said it wasn’t, because he rarely listens to his own material. “For me, the experience of listening to stuff I work on is an agonizing process of nitpicking at it, so I just don’t do it,” he said. Didn’t he have to listen to his songs when he performed them? Again, no. “Some part of my brain would have to take over so I wasn’t totally present [when performing], because otherwise I would be self-analyzing every movement and everything that we would do to the point of it dissolving in front of us,” he said.

Such crippling self-criticism isn’t a trait one might normally ascribe to a rapper. Then again, Steuer and Blumberg, who both moved to the Bay Area years ago from Santa Barbara, where they were college roommates, were inspired by groups like Living Legends and Hieroglyphics — not necessarily aesthetically, but in their independent, DIY spirit. The message they got from them was freeing, not restricting. “The idea was to be who you are and not put on a front,” said Steuer. “We’re both into irony and humor. I know I’m super self-conscious, and I know those are all things that aren’t necessarily part of the hip-hop persona.”

As a result, Steuer and Blumberg were somewhat of an odd billing. They said they performed with rock and electronic bands like The Jim Yoshii Pile-Up, but they also played with Souls of Mischief and The Forest Fires Collective, the former hip-hop outfit of The Fresh & Onlys’ Tim Cohen, which was on Steuer’s record label. (Meanest Man Contest hasn’t performed in years, but Blumberg said they have “plans to make plans.”)

If Meanest Man Contest was considered then somewhat hard to pin down, it’s even more so now. “Originally, we were a group that makes hip-hop songs. But that’s not what it is anymore,” said Blumberg. (Steuer, who also has a hip-hop side project called Not the 1s, disagreed.) “Some of it sounds like weird pop music with singing and there’s no rap whatsoever and you wouldn’t know it’s samples necessarily.” (Actually, about 30 percent of their music is sampled, according to the two.)

Steuer said branching out was the natural result of getting older and caring less about fitting in: “Not to reduce the importance of the stuff that we worked on when we were younger, but it was definitely more focused on sounding like it’s part of a particular scene or a world, and I think the stuff that we’ve collected with this and we’re doing going forward is more two guys who love music — love buying music, love listening to music, love sharing music with each other — and taking all that stuff and making stuff that feels inspiring to us out of it.”

For whatever reason, this freer environment often leads to somewhat sad music. Steuer said a reviewer once described them as “emo-hop,” which he called “ridiculous and dismissive.” While it’s definitely not “emo” in the overblown sense, there is an undeniably somber pall cast over these songs. Why? “I’ve often thought about that and wondered if there was something wrong with me,” said Blumberg. “We tend to be outwardly friendly and upbeat people. … That’s not how we are normally in the world so we’re able to express some of that stuff through songs. Sometimes, if you’re looking for something to express that’s intense and direct, you go to that place.”

“Intense” isn’t an adjective I’d use to describe Everything Worth Mentioning, but it does conjure emotions in a refreshingly understated fashion. One could see how it could unite disparate music communities — bedroom tweakers, synth-pop heads, backpacker hip-hoppers, Beck fans, and anyone with a fondness for overcast pop songs. Steuer said one of the things he appreciated most about hip-hop growing up was its ability to turn you onto different types of music through use of various samples. In that case, Meanest Man Contest fits right into the legacy of hip-hop.