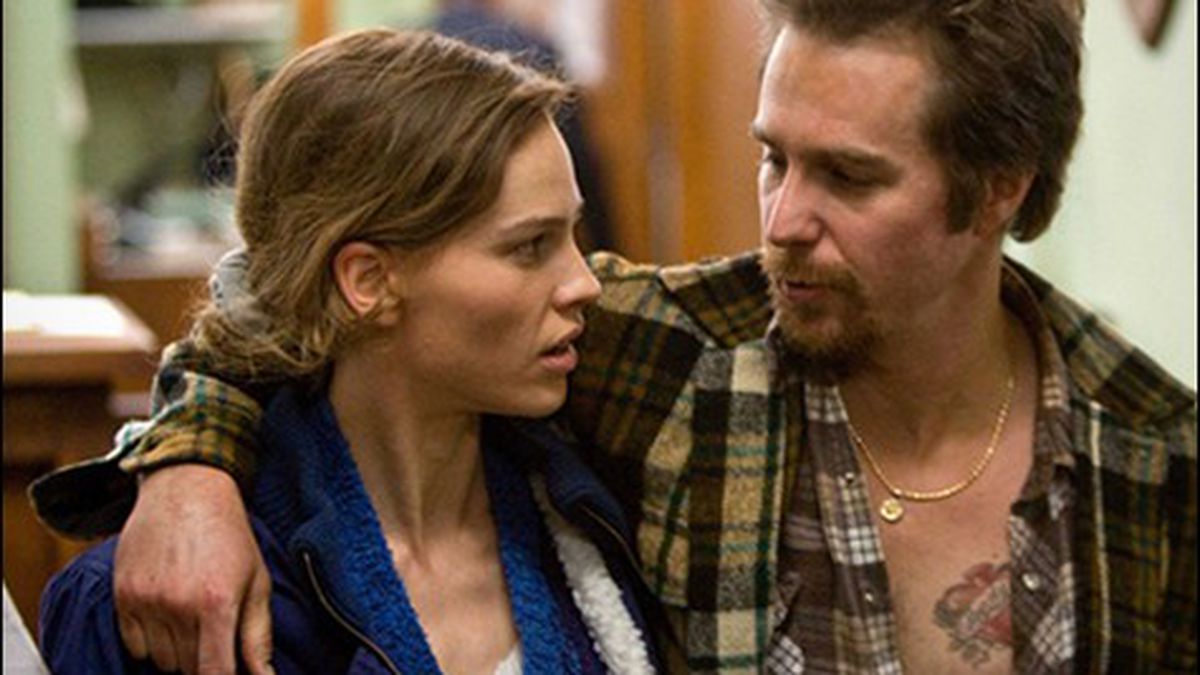 Meanwhile, mumblecore epic Douchebag sneaks up on us.

A sister and brother from a distressed Massachusetts family are separated in childhood to be raised by different foster parents. As they grow up, they maintain their devotion to each other. And so when short-tempered, immature Kenny “Muddy” Waters (Sam Rockwell) is convicted of murder in the death of a female acquaintance, on circumstantial evidence, and is sentenced to prison, Kenny’s serious-minded younger sister Betty Anne Waters (Hilary Swank) believes he’s innocent. In fact, she’s so convinced he’s been railroaded that she spends the next eighteen years putting herself through law school, becoming an attorney, and then representing Kenny in a bid to get his conviction overturned, using the then-new technology of DNA testing.

If that sounds a bit too familiar, it’s because — even though the scenario is based on a true story — variations on the same theme have been the basis for countless movies from Depression-era Warner Bros. potboilers to the present. There’s a formulaic feel to the material. This latest variation is Conviction, an earnest but only fitfully entertaining drama that relies too heavily on well-worn ingredients.

It’s another Hilary Swank crusade against injustice. The princess of underdogs once again finds herself in lower-middle-class territory as scrappy, determined, easily dismissed Betty Anne. We’d have to conduct our own DNA testing to differentiate Betty Anne from Maggie the boxer in Millionaire Dollar Baby, cross-dressing Brandon Teena in Boys Don’t Cry, or, for that matter, The Next Karate Kid‘s underrated juvenile female martial artist. We might as well throw in Amelia Earhart and the South African attorney in Red Dust for good measure.

The humble but headstrong fighter for truth and honor, that’s Swank’s meal ticket these days. She’s the new Sally Field, the new Julia Roberts, and the new Sandra Bullock (or is Bullock the new Swank?). As Betty Anne scurries around anxiously grilling reluctant witnesses and giving visiting-day pep talks to her increasingly despondent bro, her halo brightens perceptibly and we can feel that happy ending just around the next bend.

Funny thing, though: She never asks him point-blank if he did it or not, and we haven’t been shown enough to know the truth ourselves. So we have to rely on Betty Anne’s plucky courage and unquestioning belief in the squirrelly jailhouse Muddy to carry us across the finish line. Or not. Swank was a terrifically interesting actor in 1999 when Boys Don’t Cry was made, but she didn’t challenge herself in her choice of roles — and the success of Million Dollar Baby only solidified that tendency. Conviction has all the unexpected thrill of a new toaster.

But it’s not without its incidental dividends. Rockwell’s Muddy, a barroom brawler and low-rent charmer with a self-destructive streak a mile wide, is the best reason to sit through the film. Wish we could say the same for Minnie Driver in the tacked-on-looking “lawyer best friend” role of Abra Rice. Deep down inside the gritty community in and around Ayer, Massachusetts, we find character actor supreme Melissa Leo as police officer Nancy Taylor, who has a definite grudge against Muddy and works hard to stack the deck against him. She’s authentic.

Juliette Lewis, always a risk-taker, pulls an ace in the small part of cheap party girl Roseanna Perry, who essentially framed Muddy for a nickel. The scene in which Betty Anne finally pulls the truth out of morning drinker Roseanna has all the snap that most of the movie lacks. Brave but effective career move for one-time teen temptress Lewis — next thing you know, she’ll be earning raves playing toothless hags in horror movies.

Aside from the inertia and narcissism of big-budget Hollywood in general, the chief culprits behind the disappointment we feel as we stagger out of Conviction are probably producer-director Tony Goldwyn and screenwriter Pamela Gray. Gray is a TV veteran (Star Trek: The Next Generation, Once and Again) and obviously has a knack for turning out safe, predictable dramas. Goldwyn, the actor-turned-filmmaker — he usually played untrustworthy knaves, most memorably getting dragged down through the floor into hell in Ghost — who went on to direct such TV series as Dexter, handles the bankable Ms. Swank with kid gloves when she obviously needs to be scared straight.

Rockwell, Leo, and Lewis remind us of the qualities we once admired in Swank, before she got complacent. Together, those three actors almost manage to puncture the bubble of boredom, the force field of ennui, that Conviction sets up. Just because it’s a true story doesn’t mean we need to watch it.

Once we blast out of Ayer, it’s just a short ride down the Nowheresville Freeway to the land of Douchebag. If, from the devil-may-care title, you were expecting a slackly written and acted indie character-study poised just this side of tongue-tied mumblecore, you’d be right.

Question: What’s a doll like Steph doing with this family of dorks? Sam is a controlling, selfish asshole and Tom is a walking fetus, waiting to be born. Despite Steph’s objections, the numbskull brothers embark on an old-girlfriend hunt that takes them through a Palm Springs roller rink and other sad locations. It’s a vision quest of sorts for these boring boys, and we’re genuinely surprised when one of them — we won’t say which — blossoms under the pitiless Southern California sun, against all odds.

It took four writers — including director Doremus (Spooner) and actor Dickler, a film editor turned actor — to come up with the screenplay, but in its aggressively anti-incidental way it builds to a satisfying climax, with the kind of slo-mo speed bumps and hiccups that indicate too much thought and emotion rather than not enough. Let’s have a warm, relaxed round of applause for Douchebag.