Police say extended clips that carry more than ten bullets and can turn handguns into assault-style weapons are common in the city. 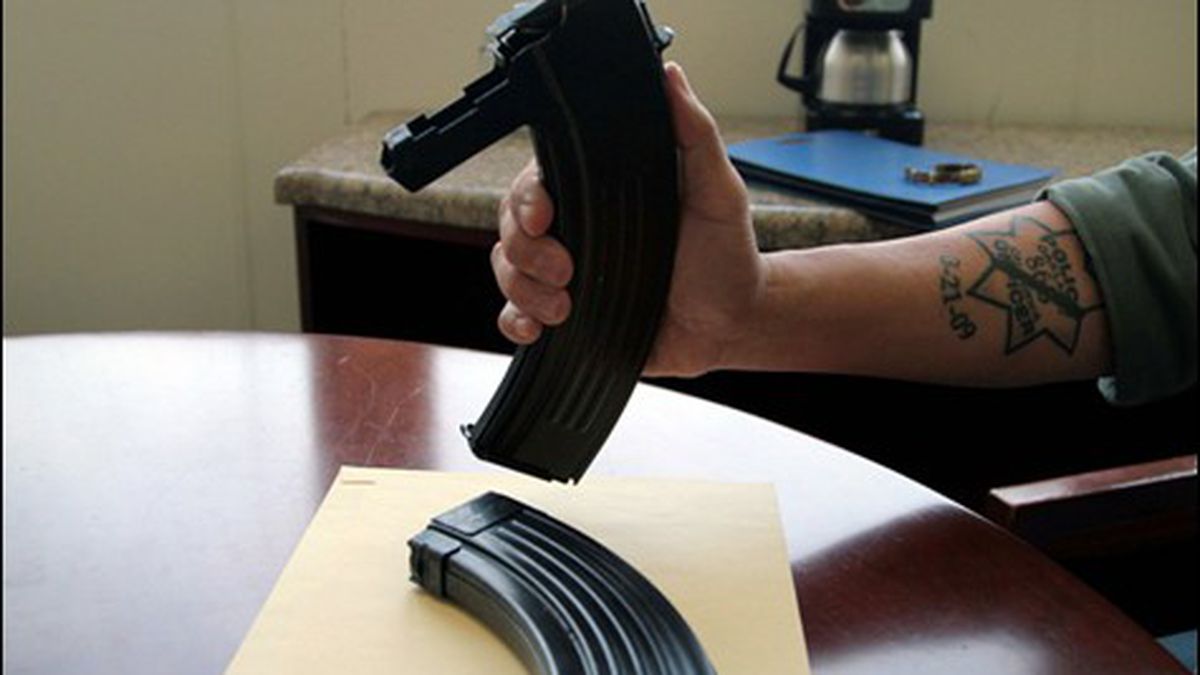 On New Year’s Eve, ShotSpotter, the technology that the Oakland Police Department uses to detect gunshots, recorded nearly two hundred incidents of shots fired in the city from 10 p.m. until 2 a.m. At 10:30 that night, ShotSpotter detected a crackle of heavy-caliber gunfire near 84th Avenue and Dowling Street in East Oakland. After a brief car chase, OPD officers cornered and arrested Steven Stevenson, a 31-year-old Oakland resident, on 77th Avenue near Hillside Street. While searching Stevenson’s car, officers discovered a Colt DPMS assault rifle and a drum magazine that holds up to 100 rounds of ammunition.

The high-capacity magazine attached to Stevenson’s assault rifle is similar to the 100-round drum used in the movie theater massacre last July in Aurora, Colorado — an incident that left 12 people dead and 58 wounded. Oakland police say extended clips that carry up to thirty bullets for assault rifles and pistols are not uncommon on city streets and are easily obtained in neighboring states — such as Nevada and Arizona — that do not share California’s law banning the sale of ammunition magazines that hold more than ten rounds.

Officer David Wong, a former Marine who runs OPD’s armory, verifies the make, model number, and capacity of weapons seized in Oakland by city police. He told me that the 100-round drum magazine seized on New Year’s Eve is one of three such drums that he recalls were taken off the streets by OPD since 2011 — the other two being ones for AK-47 assault rifles. While these super-large magazines are not exceedingly common in Oakland, Wong said he has seen significant numbers of high-capacity magazines that hold more than ten bullets for rifles and handguns. On a recent afternoon, Wong displayed two 7.62-caliber clips for AK-47 and SKS-model assault rifles seized by OPD in late 2010, along with two rifles. According to Wong, 7.62-caliber rounds are capable of piercing body armor. “I’ve seen them go through the outer walls of a structure, as well as two inner walls,” Wong said.

Weapons with such modified ammunition devices are also capable of rapid rates of fire, even if they aren’t fully automatic. A 30-round AK-47 clip can be emptied in less than 25 seconds, while a 9 mm Glock pistol equipped with a drum magazine can fire all 50 rounds in the loader in 14 seconds. “If you have a person who is even minimally trained with a particular assault weapon, an AK-47 with a 30-round clip can be murderous enough to keep police officers at bay for quite a while,” said Wong, whose forearm bears a tattoo with the date 3/21/09 under an OPD badge partially covered with a black band, in reference to the four officers killed by parolee Lovelle Mixon. SWAT team sergeants Daniel Sakai and Ervin Romans were cut down by 7.62 mm bullets from an AK-47 when they stormed the East Oakland apartment in which Mixon was holed up not long after he had killed Sergeant Mark Dunakin and Officer John Hege during a car stop.

According to the 2011 management report for OPD’s Criminal Investigations Division, the department’s gang unit took eighteen rifles off the street that year, and eight arrests by OPD resulted in assault weapons charges filed by the Alameda County District Attorney’s Office. OPD does not keep statistics on the number of drum magazines or extended-capacity clips it recovers, however.

Extended 30- and 28-round clips for handguns, particularly 9 mm Glocks and Berettas, have become popular in recent years among Oakland’s violent street gangs, police say. Wong noted that from the middle of 2011 through the first quarter of 2012, roughly 10 percent of all handguns seized by OPD officers had high capacity clips. One criminal enterprise that favored such munitions is the Burn Out Family, an East Oakland street gang heavily involved in the heroin and cocaine trade in the area of 82nd Avenue and Birch Street, 72nd Avenue and Hawley Street, and 88th Avenue and A street. A federal racketeering indictment made public last July resulted in charges against forty people who allegedly formed the core of the Burn Out Family.

Captain Ersie Joyner, who started the Burn Out Family investigation in 2007, said the gang’s profitability was due in no small part to the propensity for violence by its members. “They were involved in more than ten murders from 2007 onwards, as well as over fifty shootings,” Joyner told me. Burn Out Family’s members also did not limit themselves to their East Oakland turf, Joyner said. They operated in “West Oakland, North Oakland, even up in Antioch,” he added. Although gang members were documented using rifles that took heavy-caliber 7.62 mm and .223 mm ammunition, OPD said they were notorious for their use of 30-round extended clips for semi-automatic pistols.

Wong said he and agents from the federal Bureau of Alcohol, Tobacco, and Firearms became particularly interested in the magazines used by Burn Out Family members because they were in such good condition. “They were pretty nice, they hadn’t been used previously, so that got our attention,” said Wong.

Law enforcement officials say another major problem with extended-capacity magazines is that they are all but impossible to trace back to their point of origin. Steven Stevenson’s Colt DPMS rifle, for example, would have been traceable back to the seller had its serial number not been obliterated. The drum magazine found on the rifle had no serial number. Wong said that is because ammunition magazines for public sale are not serialized. The only exceptions, he said, are for prototype munitions tested by the military.

Oakland’s seriously understaffed police department (612 officers, down from more than 800 in late 2008) is struggling to tamp down violence in 2013 after more than 130 people were killed in the city last year, the highest death toll since 145 people were slain in 2006. For example, New Year’s Eve was the first time that OPD had officers on the street to respond to ShotSpotter alerts since July 4. “If you have the technology and we don’t have anyone to respond correctly, we’re not going to catch the guys,” Joyner told ABC 7’s Mark Matthews earlier this month.

As of January 13, six people had already been slain in Oakland, and last weekend, eleven people suffered non-fatal gunshot wounds in the city, police said. And the caliber and types of weapons available on city streets, particularly the high-capacity magazines and drums, increases the likelihood for carnage.

The four homicides that took place last Friday were no exception. An AK-47, an SKS rifle, and a modified Tommy Gun were among the eleven firearms recovered by OPD in response to the retaliatory violence between two feuding groups of young men. Eddiebo Rodriguez, 20, was slain with an assault rifle on 34th and West streets and police arrested a man in connection with his shooting on Friday evening.

Weapons traffickers also can make a handsome profit selling military-grade ammo magazines in Oakland. Luis Cardenas-Morfin, a West Oakland Norteño gang member currently serving time in federal prison for weapons trafficking, sold an AR-15 equipped with a 90-round drum magazine to undercover OPD Officer Eric Milina in 2010 for $2,500 (see “Getting Away with Murder,” 11/16/12). An agent with the Bureau of Alcohol, Tobacco, and Firearms traced the weapon back to a gun shop in Columbus, Georgia.

Nationally, the massacre of 27 people, including 20 children, in Newtown, Connecticut in December has reignited the national debate over gun control and high-capacity magazines, which were illegal under the federal assault weapons ban that ran from 1994 through 2004. Following the ban’s expiration, many municipalities and states passed strict laws mirroring the lapsed federal ban. And since the Aurora shooting, US Senator Dianne Feinstein of California has been pressing for a renewal of the ban on assault weapons and high-capacity magazines. “Who needs these military-style assault weapons? Who needs an ammunition feeding device capable of holding 100 rounds?” Feinstein wrote in a July 29 opinion piece in the San Francisco Chronicle following the Aurora shooting. Under the ban, the manufacture and sale of extended-capacity magazines would be illegal, as it was for a decade.

However, there are no laws requiring criminal background checks for people purchasing ammunition. That could change for California residents if a bill introduced last week by East Bay Assemblywoman Nancy Skinner is approved by the legislature. AB 48 also would ban kits used to convert ammunition clips into high-capacity magazines, would require identification for ammunition purchases, and would create a licensing system for ammunition vendors and a statewide database of ammunition sales similar to that used for pseudoephedrine sales. “It is easier to buy ammo than to buy cold medicine, alcohol or tobacco,” Skinner said in a statement last week. “It’s time for buying deadly bullets to fall under the same controls as guns and Sudafed.”

But even if Skinner’s bill passes, the four-hour drive to Reno — and Nevada’s free-for-all gun laws — will still be a draw for those seeking assault weapons and high-capacity magazines to use on the streets of Oakland.

Next ArticleMid-Week Menu: Pop-up Ramen, $4.20 Pho, and a Late-Night Deal at Chez Panisse