More than twenty years after its formation, the Oakland hip-hop collective is still in sync with its signature Hiero flow. 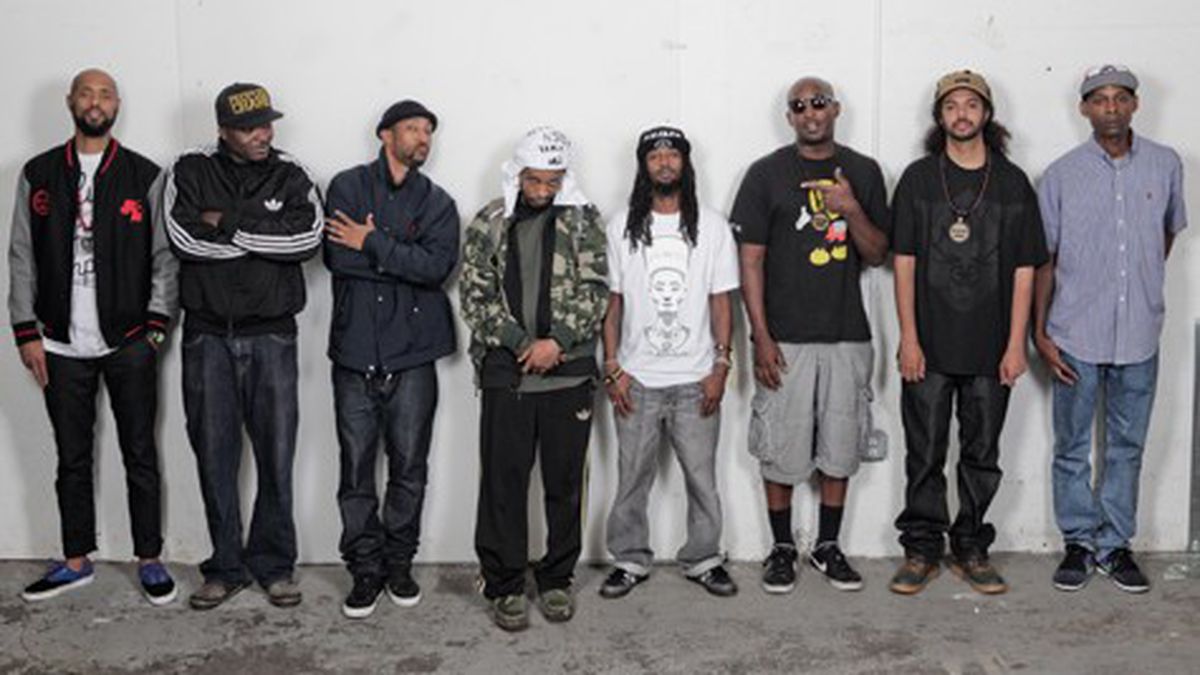 For the second straight year, the City of Oakland has declared September 2 “Hiero Day” — a tribute to Hieroglyphics, the pioneering hip-hop collective with the iconic third-eye logo. That’s a feat in and of itself; city officials have long maintained a hands-off relationship with native-son rappers (with the exception of Hammer). At this year’s Hiero Day — a free, family-friendly street festival featuring live performances, skateboarding demos, face painting, and a petting zoo — there will be more reasons to celebrate. It’s shaping up to be Hiero’s year, with multiple tours and releases, including the group’s first new album in a decade, The Kitchen, which was released in July; a deluxe-edition release of 93 Til Infinity by Hiero subgroup Souls of Mischief (for which, full disclosure, I authored the liner notes); a new Souls album; and the much-anticipated second effort by Deltron 3030 (the alternative hip-hop supergroup featuring Hiero founder Del the Funky Homosapien, plus Dan the Automator and Kid Koala), which comes out October 2.

At last year’s inaugural Hiero Day, a large crowd (estimated between 7,000 and 11,000) — many of them sporting the group’s logo — covered two city blocks. Such a turnout is a testament to Hiero’s loyal fanbase, which has supported its members as they transitioned from wide-eyed youngsters to savvy veterans. Along the way, they’ve become identified not just as prolific artists but also as pioneers of independent DIY hustle and culturally authentic hip-hop. In a series of recent phone interviews, the group reflected on its two-decade history and what’s kept its members together all these years.

“Nobody raised the bar for hip-hop in the Bay Area the way we did,” said Casual, one of Hiero’s seven emcees, speaking from the road (he’s currently on the “Clash of the Titans” tour with The Alkaholiks and Cali Agents).

Twenty years ago, Bay Area rap wasn’t especially well-regarded lyrically by East Coast tastemakers, and its musical components tended to be easily stereotyped: Too $hort’s penchant for X-rated rhymes overshadowed his occasional street-level social commentary; Digital Underground wasn’t seen as much more than Humpty Hump’s fake nose and P-Funk samples; Spice-1 was viewed as an Eazy-E knock-off; and Hammer was famously dissed by the New York City group 3rd Bass. Even when Bay Area rappers got political, like Paris on his 1990 track “Break the Grip of Shame,” people shrugged it off as riding the Public Enemy wave.

The members of Hieroglyphics saw themselves not as gangstas, pimps, or players, but as hip-hop artisans who purposefully used vocabulary no other emcees had uttered and samples no one had looped before. “I was a hip-hop junkie,” Del recalled. “Those ideals I embraced, I could really relate to.” Emcee Opio added that when Hiero started “[there weren’t] many cats that were serious into hip-hop.” Phesto Dee, another rapper in the group, further explained: “We’re all like-minded. Lyrically, we have a certain chemistry.”

A-Plus, Opio, Phesto Dee, and Tajai then formed Souls of Mischief, which broke through with its debut single, “That’s When Ya Lost.” The track sent a message that Hiero was determined to carve out its own sound. “We wanted to make it so you had to take us seriously, even if you didn’t want to,” said A-Plus, who produced the song.

Released on Jive — a label shared by KRS-One and A Tribe Called Quest — “That’s When Ya Lost” aired nationally on Yo! MTV Raps and introduced the intricate wordplay and highly technical internal rhyme patterns that would define the “Hiero flow.” Tajai explained it as “double entendres, triple entendres, and multi-syllabic rhymes.”

Souls of Mischief released its debut album in 1993 — to date, the collective’s most commercially successful work. 93 Til Infinity became a blueprint for Hiero’s group dynamic, and featured guest appearances by Casual, Del, and Pep Love. The album is often best remembered for its uplifting title track — another A-Plus production whose hook (This is how we chill from 93 til) now seems like a self-fulfilling prophecy — much of 93 Til Infinity grapples with heavier themes. In 1992, Oakland saw a record high of 164 homicides, something Hiero’s members witnessed growing up in deep East Oakland amidst the crack epidemic. There are constant references to random gun violence and cautionary tales, but they’re especially present on “Anything Can Happen” and “What A Way to Go Out.”

“I’m from 82nd [Avenue] — not shallow East [Oakland],” Tajai said. Del added: “Anytime we wanted to go anywhere, it was like a scene from The Warriors. I might’ve went [in] those negative directions if it wasn’t for hip-hop.”

“93 Til Infinity” was a modest hit at the time — it became a radio staple locally — and the album was well-received by listeners outside of the Bay, although it never went gold. The album may have been unfairly subjected to coastal media bias — Hiero beatsmith Domino still seemed perturbed by the fact that New Jersey rapper Apache (“the ‘Gangsta Bitch’ guy”) received a better review in The Source magazine at the time — however, he said: “The real test is ten, twenty years, later when you put it on, how does it feel?”

Two decades later, 93 Til Infinity feels like a true classic, awash in a youthful haze of basement blunt sessions and freestyle battle-rhyme ciphers set to jazz-fusion loops atypical of West Coast rap at that time. Looking back, it’s evident that the album set a benchmark for alternative rap. Along with The Pharcyde and Freestyle Fellowship, Hiero paved the way for many, including Jurassic 5, Rhymesayers, Living Legends, and Quannum Projects. The crew’s influence was also apparent in the Hiero-esque underground groups that sprouted locally, among them Misfits of Stylz, Hobo Junction, and Cytoplasmz. To this day, said Domino, 93 Til Infinity “continues to affect people in a positive way.”

In the mid-Nineties, subsequent major-label releases by Del, Casual, Extra Prolific, and Souls followed. Unfortunately, the music industry started to swerve away from progressive hip-hop in favor of boy bands, tart-pop, and mainstream gangstas. By 1997, every Hiero-affiliated artist had been dropped by major labels. But instead of throwing in the towel, Hiero went the independent route, launching its own label, Hieroglyphics Imperium.

“We got released. We didn’t fall off,” Domino said. “We were still worth something.”

Distributing its music on the internet, along with constant touring — Tajai estimated the Souls have played 100 to 180 dates per year for the past twenty years — helped keep Hiero afloat after its members’ major-label stints ended. A fan-created website, Hieroglyphics.com, gave the group an online presence “before most labels had a site,” Domino explained. As a result, he said, fans were able to find out about previously unreleased rarities (hawked on cassettes) as well as Hiero-branded merchandise.

Though all of the members had established solo careers, they continued recording as a group: “We had a need to be all together as one,” Del said. “We all had a lot of songs we did together anyway.”

In 1998, the group’s Third Eye Vision sold more than 100,000 copies independently, and was followed in 2003 by another group album, Full Circle. Non-traditional hip-hop fans like skateboarders embraced high-profile side projects such as Deltron 3030, and found the group through guest appearances on albums by Handsome Boy Modeling School and Gorillaz. Hiero further widened its collective sphere of influence by licensing songs to video games and booking shows in college towns all over the country.

As a result, Hiero has been able to turn over its fan base many times. “We have a direct connection to the fan base,” Domino said. “It’s hard for people to gauge that. They’re here, [but] not because KMEL is pumping it.” Casual continued: “The logo has grown to mean more than us.” And Pep Love noted, “People have Hiero tattoos.” Tajai compared the third-eye logo to the kosher/halal symbol: “It means quality hip-hop.”

The group’s latest release builds upon that foundation. The Kitchen was cooked up with fresh ingredients, aided in part by production from Sacramento-based DJ crew the Sleeprockers. Thankfully, the album maintains its cultural relevance without pandering to fads like EDM and trap music, or raunchy gimmicks like ratchet.

It’s rare — not just in hip-hop, but in music in general — to find a group with as deep a catalog as Hiero that hasn’t become a nostalgia act. “It’s hard for the guys who go away and come back. We’ve stayed at it,” Tajai said. “We’re at the top of our game, really.”

Each Hiero member is still driven by his own creative impulses. “I can’t really ride on what I’ve done before,” Del said. Casual chimed in: “I think of hot lyrics almost every single day. I don’t see myself stopping.” They’re more than willing to challenge the paradigm of hip-hop as a disposable culture and the double standard that has enshrined legacy rock acts while shunning rappers over the age of 35.

What’s changed the most for Hiero’s members is the fact that many of them now have kids. Tajai, who has a fifteen-year-old and a two year-old, said it’s a challenge to “figure out how to create an income stream and not be absent parents.”

Pep Love said what hasn’t changed is “the love for what we do. That’s the thing which holds us together.” The emcee acknowledged that “intellectual rhymes [weren’t] always in line with local culture. We persist and we exist. It’s like it’s come” — there was a pause as he chose the exact right wording — “full circle.”