Killer pupusas and destination-worthy menudo in the back of a Richmond corner store. 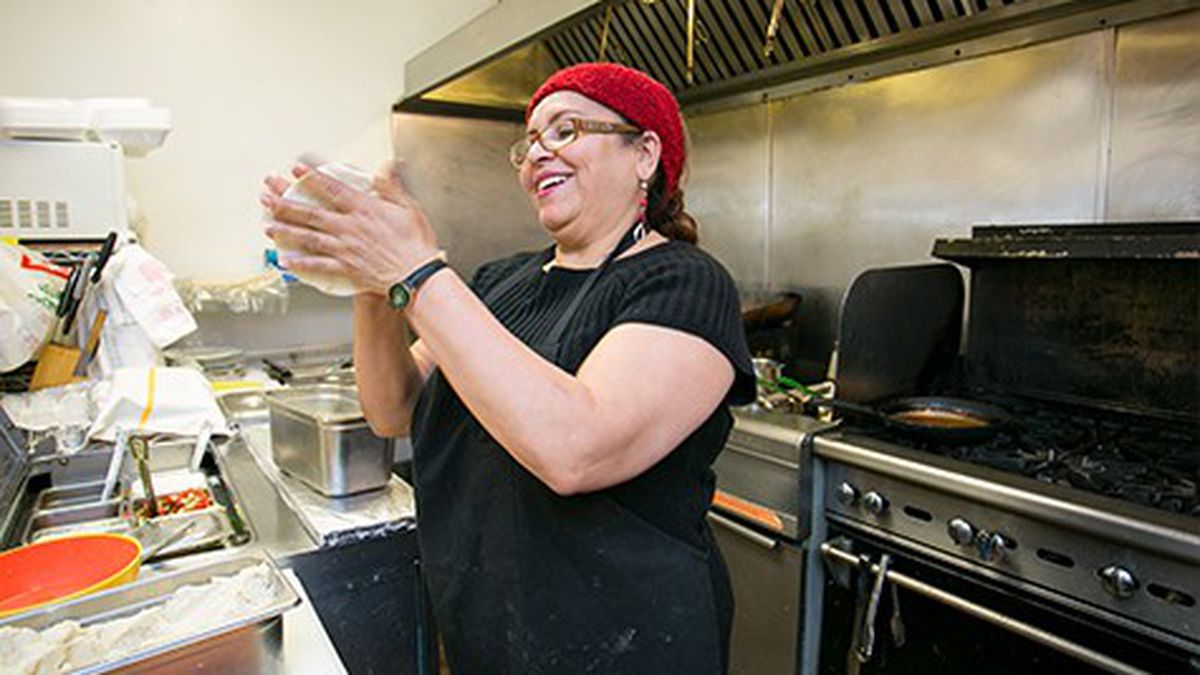 I don’t know if Richmond really is the new Fruitvale, as one Bay Area food writer recently declared. What I do know is this: Lately, I keep gravitating toward the city’s 23rd Street corridor, where delicious, inexpensive Latino eats are so densely concentrated that you can’t help but stumble on kick-ass al pastor or a great bowl of posole. Traffic snarls on I-80 be damned, all I can think about is the tacos.

Some of the best food in the city is hidden in plain sight. Anyone who has ever paid a visit to Norma Meat & Deli, a small Salvadoran-Mexican restaurant and meat counter in the back section of the Val-Mar Market convenience store, can attest to that. The market sits in a residential neighborhood just off the highway, a good fifteen blocks away from the bustle of 23rd Street, and at first glance it looks like any other corner bodega — a small produce section, shelves lined with Tapatío and neon-bright bottled soda, and the garish fluorescent glow that’s characteristic of liquor stores and supermarkets.

But if you’ve brought your appetite, head toward the “Carnicería” sign and the small counter in back, where for the past four years Norma Muñoz has been serving hand-made pupusas, stellar tacos, and burritos as thick as a carpenter’s forearm.

Muñoz is a native of Ahuachapán, El Salvador, but more than half of her menu is Mexican — most of it identical to what she served when she was one of the owners of Taqueria and Restaurant Familiar, a now-shuttered sit-down restaurant on San Pablo Avenue. In any case, Muñoz comes by her Mexican cooking chops honestly: Not only does she prepare the cuisine at home for her Mexican husband, when she first moved to the Bay Area in the mid-1980s, she bluffed her way into a job rolling burritos.

It turned out she had a knack for it. The burritos at Norma Meat & Deli were notable in part because of their enormous size, especially when I opted for one of the guacamole, sour cream, and cheese-laden super burritos, which were more than a foot long and perhaps the girthiest I’ve encountered. But they were also balanced, well-constructed burritos: offering a pleasing union of the savoriness of seasoned rice, the brightness of guacamole, the subtle heat of fresh salsa and pickled jalapeños, and the charred flavors of the grilled meats.

Of the meats, my favorite was the al pastor, or marinated pork, which Muñoz chops up and grills to order. This isn’t the spit-roasted, pineapple-topped al pastor preferred by traditionalists, and it’s perhaps a notch below the sublimely meaty, crisp-edged version at Los Mexicanos Deli on 23rd Street. But I loved the flavor of the vinegar-and-dried-chili marinade, the sweetness of the well-caramelized onion strands that Muñoz grills along with the pork, and the juiciness of the whole thing. The carnitas were also excellent, imbued with deep, porky saltiness and plenty of crispy bits. Only the carne asada — chunks of chewy steak that were neither flavorful enough nor abundant enough to stand up to all of the other burrito fillings — fell a little bit flat.

To nitpick for a moment: The thin, puréed red salsa was searingly potent on one visit but rather tepid on another. Round tortilla chips come out of a bag, and, although Val-Mar sells alcohol, you have to order your food to go if you want to wash it down with a beer — the taqueria doesn’t have a liquor license.

Still, the food has a homey quality that transcends what you’d expect to find in the back of a convenience store. If, like me, you don’t care for the abundance of rice that fills a typical Mission burrito, then tacos are the way to go. By default each one comes on a double layer of pre-packaged corn tortillas, but if you request it, and have the patience to wait, Muñoz will make fresh tortillas, pressing the masa with her bare hands, then griddling the thick rounds so that they arrive piping hot. In addition to the aforementioned carnitas and al pastor, the chicken — stewed until tender, shredded, and served over rice — makes for an especially tasty taco. If at all possible, you’ll want to pull up a stool and eat these while they’re still hot.

Given the restaurant’s Salvadoran pedigree, it should come as no surprise that the pupusas are another highlight. Like almost everything here, these are made to order so that part of the soundtrack to your meal is the quiet slap, slap, slap of Muñoz forming each round of masa dough — a practiced movement that she’s been perfecting since she was ten years old. Her pupusas were thinner than most of the others I’ve eaten — less doughy, with a higher proportion of crispy, caramelized edges. The chicharrón pupusa, which came filled with a savory ground-pork paste, was particularly delicious, especially when topped with Muñoz’s crunchy, fresh-tasting curtido — the cabbage slaw that is the traditional pupusa accompaniment. I didn’t know I had a preference for this compact style of pupusa, but most of the others I’ve had now seem starchy and overstuffed by comparison.

You’ll find Muñoz in the back section of Val-Mar seven days a week, for at least twelve hours a day, and if you wanted to write a think piece about the immigrant work ethic, she’d be as good a subject as any. Mostly she works alone, though her son, Juan, sometimes helps out on weekends and during the dinner rush.

Saturdays and Sundays are busiest in part because that’s the only time she serves Norma Meat & Deli’s greatest, and most delicious, secret: one of the best bowls of menudo I can recall eating. The tripe soup, famous for its hangover-curing properties, was a murky deep-red, subtly spicy, and slick with drops of rendered fat. Best of all, it featured not only tender tripe, but also patas, or beef feet, cooked on the bone to add a deep beefiness to the broth and wonderfully soft, gelatinous bits. I doctored up my menudo with the traditional accompaniments: a squirt of lemon for brightness, a pinch of pungent Mexican oregano, and the sweet crunch of chopped onions. It was a bowl of soup I would travel a long distance to eat.