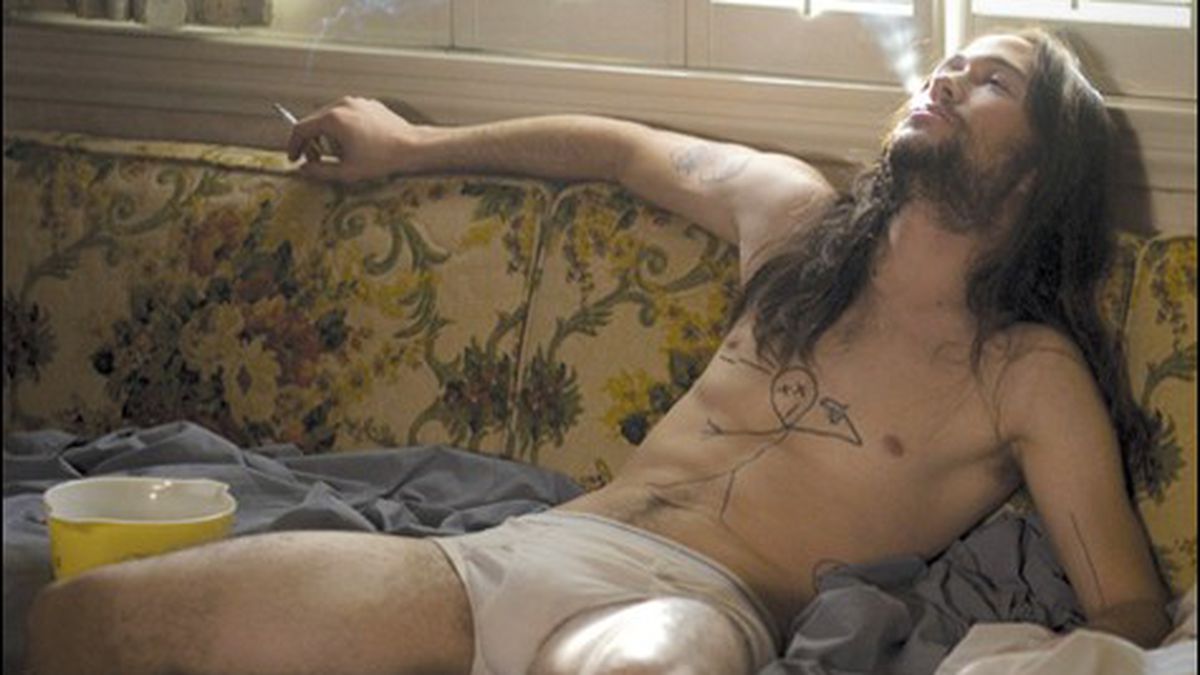 The man who came to dinner.

Right from the start we can see that Hesher is going to be different. Blond-haired T.J. (Devin Brochu), a boy of about ten, is racing down the street on his bike as if the devil were breathing down his neck. The camera follows him from a very low angle, swerving and careening, and the shots are cut together for maximum tension. In most mainstream movies about pre-teen life, a sequence of a kid on a bicycle, even a kid as agitated as T.J. seems to be, is filmed conventionally and has an aura of safe routine about it. T.J.’s reckless ride, on the other hand, looks dangerous as hell — we expect the kid to be splattered before we even get to know him.

That’s a fitting introduction to a young man in trouble. T.J. has a right to be upset: His mother has recently been killed in an auto accident, his father Paul (Rainn Wilson, portrayer of losers extraordinaire) has descended into a near-catatonic state of grief, and father and son have moved in with Grandma Madeleine (Piper Laurie) in her grotesque, tchotchke-strewn tract house, located in a horrible alt-universe one degree away from the most depressing parts of the Los Angeles metropolitan area. Dad sleeps all day, Grandma self-medicates while preparing ghastly meals, and young T.J. practices creative road rage as an emotional outlet. But then, he meets someone even angrier than he is.

Enter Hesher (Joseph Gordon-Levitt), the unfinished-home squatter T.J. interrupts while making his rounds and who then, tit for tat, abruptly moves in with the kid and his family, uninvited and full of piss, gobbling their mashed potatoes and watching their cartoons. T.J. is the only one who seems to notice he’s there.

Hesher is the type of guy we’ve all seen sprawled under freeway overpasses and hanging around convenience-store parking lots — the long-greasy-haired stoner-tweaker-huffer with jailhouse tats and bodily fluids caked on his jeans, a fully juiced shitbird loudly cross-examining the universe at his own private courtroom trial. A heavy metal soundtrack magically follows him wherever he goes. And where he’s going right now is into the lives of T.J. and his sorrowful family, to help them snap out of it.

Director/co-scenarist Spencer Susser has a definite feel for Hesher and T.J.’s little corner of the world. The American-based Susser belongs to the Australian filmmaking consortium Blue-Tongue Films, alongside such up-and-coming creators as Nash Edgerton (The Square), Kieran Darcy-Smith (Say Nothing), and David Michôd (Animal Kingdom). The Blue-Tongue group is renowned for its intelligent approach to violent genre projects, and Hesher — with a screenplay by Susser and Michôd from a story by Brian Charles Frank — certainly fits the mold, with the critical Southern California difference.

If Susser & Co. had set it in, say, the suburbs of Sydney, American audiences would have an excuse to tune it out, as a foreign art film masquerading as an indie shocker. No such sales resistance when it’s shot on location in LA and San Bernardino County (Ontario and environs). All the cultural details ring depressingly true, from the Transformational Grief Group meetings to the off-brand grocery store Charlie’s Food Town to the dirty brown smog-toned color scheme. The time frame is the Eternal Seventies, à la Boogie Nights or Repo Man. John Carroll Lynch, everyone’s favorite unhelpful clerk, puts the cherry on top of the misery sundae as the auto salesman T.J. needs to talk to.

Gordon-Levitt is perfect as randy, rowdy, raunchy Hesher, a reasonable facsimile of Boudu sauvé des eaux or Drop Dead Fred. Juvie actor Brochu (In the Valley of Elah) manages a tough role convincingly. Wilson and Ms. Laurie, of course, establish themselves instantly, with the camera’s first glance at their faces. But, sad to say, Natalie Portman is now so thoroughly overexposed that her role as T.J.’s grownup friend is meaningless, in the same ho-hum class as the presence of the requisite bully (Brendan Hill). We could do without all the wrecked-car business as well — too maudlin by half, even if it gives character actor Lynch a juicy part. T.J. has no use for bullies or sympathetic older sisters or tearful junkyard farewells. He needs more Metallica and a real live imaginary best friend to fire up the bong and scatter the ashes.