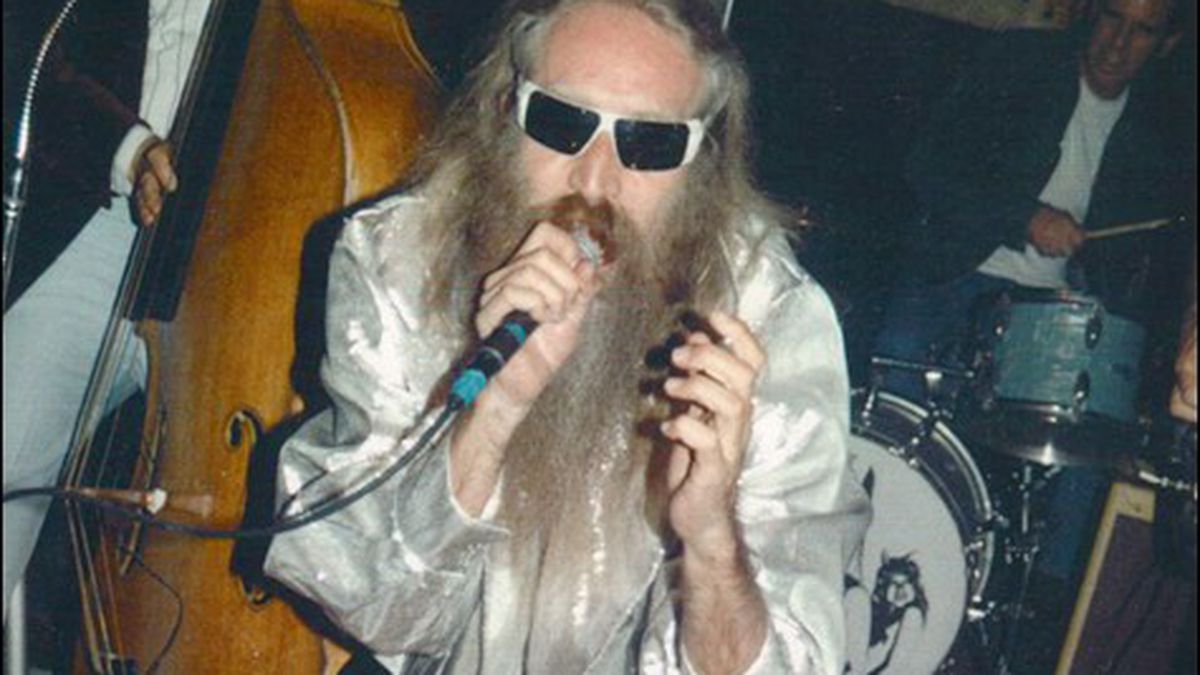 As has become his custom, Johnny Legend starts off his day with a dip in the bay. “You can really get some swimming in, once that current goes against you,” he said, sitting at a Nation’s Giant Hamburgers on Webster Street in Alameda. The thought of this wiry, long-haired 63-year-old who weighs 170 pounds or so — maybe 10 pounds of it beard — emerging soaking-wet from those none-too-pristine waters conjures images of a crazed yogi coming out of the Ganges.

Which is fitting, in a way, because Legend is experiencing a bit of a rebirth here in the Bay Area. Having relocated from Los Angeles to Alameda in the winter of 2009, the rockabilly musician, B-movie actor, porn-movie producer, horror-film archivist, and former wrestling manager is reviving his career with the kinds of eccentric projects befitting a man whose credits include playing the “Derelict Man” in Children of the Corn III: Urban Harvest. The island is a refuge for people fond of the debris of the 1950s and 1960s — in other words, the perfect place for a guy who calls himself “the most famous person you’ve never heard of.”

He may be right. Legend is an instantly recognizable figure in the fantasy convention circuit, and a guy who’s often a consultant in the field of cult movies. He’s a living nexus of pop culture.

Born Martin Margulies and raised in the San Fernando Valley, Legend has been a lifelong fanboy. “Like any impressionable kid growing up in the late Fifties and early Sixties, I was simply fascinated with a multitude of things: horror movies, for instance,” he recalled. “I loved wrestling, rock ‘n’ roll, and basically all movies and television in general.” During an appearance on the short-lived The Jon Stewart Show in 1994, he described his excitement at meeting director Ed Wood at age thirteen. He got into the movie business during his college years by composing an original soundtrack for the tong war-themed exploitationer House of the Red Dragon. This led to his famed role in the 1972 anti-drug movie Pot, Parents and Police (aka The Cat Ate the Parakeet), alongside director/co-star Phillip Pine. He plays a hippie deluded by mescaline into thinking he’s a bird.

His father, Bernie Margulies — an ear, eye, nose, and throat specialist — apparently wasn’t fond of the career path his son had chosen. According to Legend, the elder Margulies once told him, “When you become a success later on, don’t tell people I supported you from the beginning, because I didn’t.”

But Legend wasn’t deterred. His small film career as a star, director, and archivist of outré films flirted between skin flicks and legitimate cinema. He may be best known for his work with anti-comedian Andy Kaufman, whom he directed in My Breakfast with Blassie (1983), “a scathing rebuke” to Louis Malle’s 1981 yammerfest My Dinner with Andre. It’s a short symposium between Kaufman and wrestler “Classy” Freddie Blassie at a Denny’s restaurant. Legend also appeared in the 1999 Kaufman biopic Man on the Moon as a New Age healer who tries to chase the lung cancer out of Kaufman (played by Jim Carrey).

On the more salacious end of cinema, Legend’s triple-X hit Young, Hot ‘N’ Nasty Teenage Cruisers (1977) is a Boogie Nights-era oddity (in which his father makes a clothed cameo). The, er, meat and potatoes of the film are eclipsed by odd-movie jackassery. Smut fanciers had to endure scenes of a ventriloquist dummy pulling a switchblade, animated adult toys dancing on the floor, and a stable of donkeys watching a blue movie. The film gets a mini revival of sorts when it screens at the Roxie Theater in San Francisco on July 31. Vintage porn star Serena, the movie’s main attraction, will appear in person.

Legend’s cinematic revivals are proceeding apace. He recently appeared before an audience of four hundred at the Bal Theatre in San Leandro for a Creature Features tribute, as well as at a William Shatner fest at Alameda’s Forbidden Island bar. Oakland’s Elliot Lavine, a programmer at the Roxie, has brought Legend aboard for many nights of rare and bizarre films. “Johnny is a man who truly lives up to his name,” said Lavine. “He’s legendary for his gargantuan depth of knowledge, and his demented sense of humor.”

In addition to movies, Legend has long been a “rockabilly bastard.” “I’ve been kind of a half-assed rock-‘n’-roll star since ’66,” he said. He describes his long out-of-print 1998 album Bitchin’ as “a real labor of love, my Sgt. Pepper’s Lonely Hearts Club Band.” It was the album on which he paid tribute to his favorite tunes, including amphetamine-crazed British producer Joe Meek’s “Wild Wind”: “It’s a tune taking on the gods, Don Quixote-style,” Legend said.

He still plays music, in fact, and his band, The Chuckleberries, will play the Stork Club on July 7. Legend says the show will be a mix of originals and covers, including a lounge version of the surf hit “Pipeline” and a serious version of Ross Bagdasarian Sr.’s novelty tune “The Witch Doctor.”

As if all that wasn’t enough, Legend is also a former wrestling manager and aficionado. He was the “entertainment manager” for “Classy” Freddie Blassie. In the 1990s, Legend created Incredibly Strange Wrestling, a futuristic lucha libre extravaganza that played at Lollapalooza in 1995. Such grapplers as the Ku Klux Klowns and Cletus “The Fetus” Kincaid strutted on the stage. Rey Mysterio Jr. worked with Legend under the name “Giant Killer” back when he was a fifteen-year-old athlete. After other parties took up the “Incredibly Strange Wrestling” rubric, Legend walked away and created a new organization: Incredibly Strange Rock and Roll Wrestling.

Conversations with Legend get derailed fast into incidents from his past. There was the time he got on camera with English singer/actress Petula Clark in the 1966 rock concert film The Big T.N.T. Show. His band Lightmyth issued a single of The Beatles’ “Across the Universe” in 1970, in advance of the Fab Four’s album version (Legend and his bandmates scooped the song from a charity record John Lennon made for the World Wildlife Fund). There was also Legend’s mid-1980s Ultimate Sleazemania compilation on VHS, a series of trailers for such tidbits as 1948’s Curse of a Teenage Nazi (aka When Men Are Beasts) (“It screams the terrifying truth!”), My Baby Is Black! (1961), and the pre-Mel Gibson cruciflick Lash of the Penitentes (1936).

Legend is currently considering writing a three-volume autobiography to address all his obsessions. His latest project, some four years in the editing, is “TV in Acidland.” This clip show of oddities will debut as part of a three-day Legend program at the Roxie in August. So why does he keep spelunking through the caverns of forgotten pop culture? “I simply stuck with the program, kept the faith, and never wavered,” he said. “People often say to me, ‘Okay, great, but what’s your day job?’ My only answer is ‘This is it.’ I just never actually grew up, or ‘came to my senses,’ or whatever the hell it is that most people do to become ‘adults.'”

‘Faux’ Cronuts Pop Up in Oakland

The Great Cannabis Crash of 2019