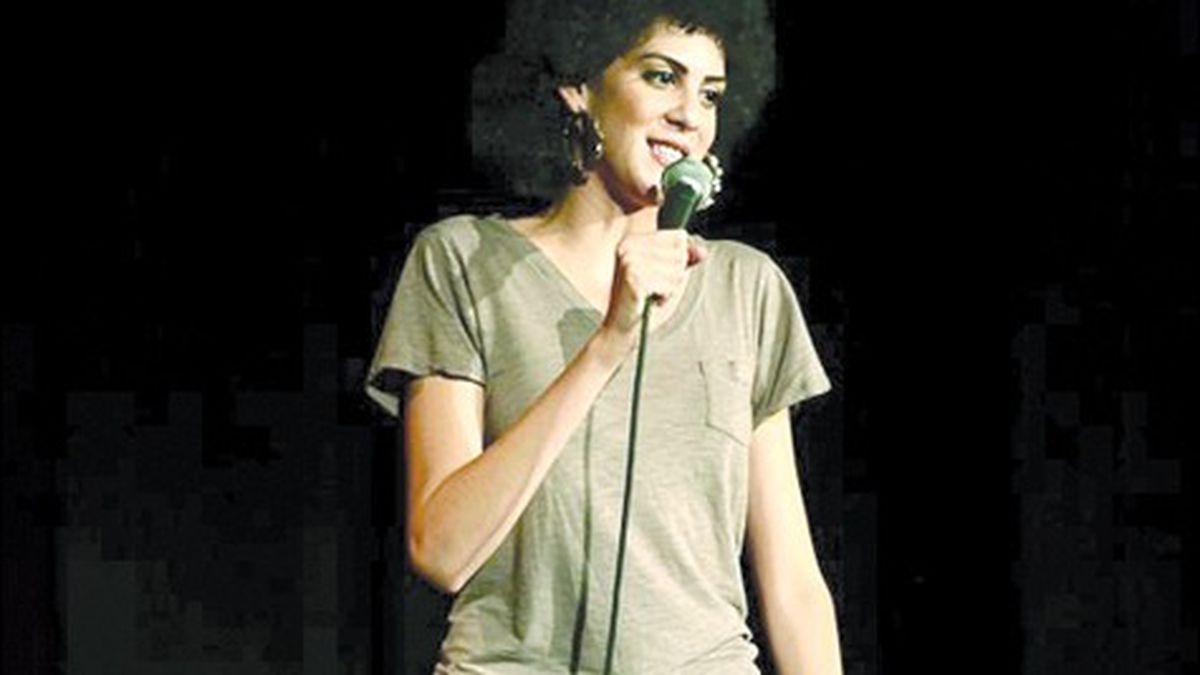 How comedians deal with their worst foes.

You can’t miss Marcella Arguello. Standing six-foot-two without her customary heels — which add another two or three inches — she’s long and narrow, with black curly hair that nearly graces the ceiling at San Francisco’s Punch Line stage, where she sometimes performs stand-up comedy. Arguello says that height can be an asset for a female comedian. It makes her intimidating. “When I was in sixth grade, people thought I was an eighth grader,” she bragged. “They were all scared of me.”

But it wasn’t enough to fend off a heckler in Berkeley, where Arguello performed a few weeks ago. (She declined to name the venue.) Arguello said she had reservations going in. The audience was older, and predominantly white, and not eager to be sassed by a young, smart-mouthed, avowedly un-PC Latina woman from Modesto. Early in the bit someone’s cell phone went off, and Arguello reacted accordingly. “Oh, oooooold people, they don’t know how to silence their cell phones,” she snidely remarked.

One woman didn’t take so kindly to being remonstrated. “Stereotypes aren’t funny,” the woman muttered defensively. That was enough to set Arguello off. She turned and addressed the woman. “First of all, bitch, yeah, they are. Second of all, you’re at a comedy show. Fuckin’ relax.”

Then Arguello felt guilty. “She got all upset,” the comedian recounted. “And I felt bad ’cause I called her a bitch. So I started talking to her. I was like, ‘What do you do?’ And she said, ‘I’m a teacher.’ I said, ‘What do you teach?’ She said ‘ESL.’ I was like, ‘Oh shit, I should be thanking you. If it wasn’t for you, I wouldn’t be able to talk shit to you and call you a bitch in my second language.'”

That didn’t go over so well, either. “She got fuckin’ even more mad,” Arguello recalled. “But after that I was, like, ‘I win. So I’m moving on.'”

Dispensing with hecklers has always been a touchy issue in the stand-up community. The truth is, you can’t escape them, Arguello said, and usually they’re a lot more obnoxious than the Berkeley woman who resented being called a bitch. Comedian Brent Weinbach said he once endured a crowd of people throwing wet napkins and used limes at the Fat Cat Club in Modesto. Joe Klocek, who will lead a workshop on how to deal with hecklers this Saturday, said that he got beaten up by an audience in rural Idaho for making a joke about Barney the Dinosaur. Emily Heller said she once got accosted by a drunk girl right as she quit the stage. “‘I heard you talked about me in your skit,'” Heller recalled the girl saying. “‘That’s you being ugly and insecure and a bitch … so enjoy your stupid fucking pigtails and your stupid fucking life.'”

If you set aside bartending and police work, it’s hard to think of other professional fields that entail this much abuse from clientele. By its very definition, comedy is a form of self-immolation: You have to go before an audience of recalcitrant drunk people, develop a rapport really fast, and make them laugh — usually by making fun of yourself. It’s pretty much a given that at some point, someone will challenge your authority. “If you’re a comedian, you’ve been heckled,” Arguello assured. Klocek agreed. “I think the crowd anticipates a certain amount of interaction,” he offered. “It makes it interesting. If you’re just up there doing your act, it’s boring and static.”

That said, there’s still a school of thought that admonishes against dealing with hecklers at all. San Francisco comedian Chris Garcia says he exercises caution when sassing his audience. “I usually ignore hecklers unless they’re really asking for it, and the crowd is on my side,” Garcia wrote, via e-mail. “If you go after a heckler before you have the green-light from the crowd, it usually comes off awkward and mean.”

But in some cases, it’s warranted. Last July Garcia chastened a drunk guy at the Punch Line, after the guy yelled insults through several people’s sets. Garcia wasn’t having it. He ditched his prepared material, and began capping on the heckler instead. “What? You’re not afraid of what? Wearing a retarded hat?” Garcia challenged, as the drunk guy was escorted out. Garcia clutched the microphone with his right hand and put his left hand on his left hip. It turned out he really enjoyed fighting. “Comics often use stock lines, but I think that’s cheap and it takes the fun out of it,” he explained. “As a comic, I really relish the candid moments, any opportunity to take off the gloves and get real.”

Occasionally, hecklers provide grist for new material. Weinbach said that once he made up a new bit on the fly, by pretending to be shell-shocked after a particularly mean heckler was disappeared from one of his Punchline gigs. “I said, ‘Well, good, I’m glad all the negative energy is gone, let’s have a positive show from now on — thank you, good night.’ And I started to walk offstage as though that had really shook me to the point that I didn’t want to go on any more.” He paused. “I was joking, but people started applauding. Then I came up and said, ‘Really? Really? You want me to go on? I don’t know.'”

The second time, Weinbach exited the stage with a much weirder walk, and audience members applauded harder. Then he came back, and coyly asked the crowd if they really, really, really wanted him to go on. Then he walked off in an even weirder way. The crowd clapped harder. He returned, took the mic, asked again if they seriously wanted him to go on. By then his exit had escalated to the point of being more a pelvic thrust than a walk. Later, he incorporated the whole bit into his regular routine. “I basically tell a joke that I think is like a bad joke, or whatever, and then I get embarrassed about the joke and start walking offstage.”

Of course, the comic who’s profited most from hecklers is Klocek, who has, in fact, turned the business of wrangling with an audience into, well, a business. His relatively famous “Joe Vs. Heckler” video already has nearly 270,000 hits on YouTube. In the clip, Klocek invited a heckler to go toe-to-toe onstage. “Somebody’s gotta bring the funny, dude,” Klocek said. The heckler tried a doggy-style joke, called Klocek a “surfer with no coordination,” got frustrated, swatted angrily at the comedian, and ultimately got heckled by other audience members. Klocek quickly regained control of the room.

In that case, Klocek admits he was thinking on the spot, and wasn’t ultimately sure of the outcome. “This might totally backfire on me,” he giggled, before giving the heckler free reign to make a fool of himself. It wound up being a slam dunk. Or at least a Pyrrhic victory.

Garcia Squares Off With a Heckler:

Update: In the original version of this story, we erroneously said that Brent Weinbach had objects thrown at him at the Hemlock Tavern, and we misspelled the name of the Punch Line comedy club.