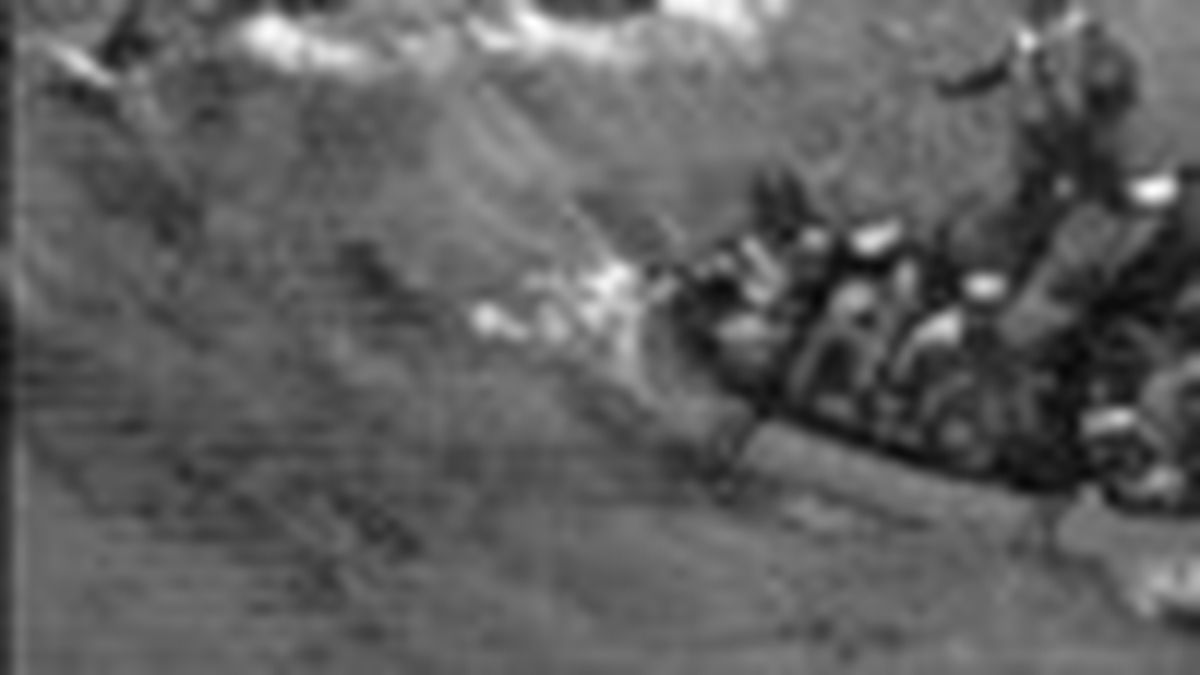 The Avalanches
Since I Left You
(Modular/London-Sire)

It’s been a long time since the world got excited about a new Australian act (Silverchair and INXS, notwithstanding — hee hee). But the buzz surrounding the debut offering from the Avalanches is alive and kicking. The Melbourne-based “dance band” is generating intense fervor with a vibrant and incredibly eclectic debut album, Since I Left You. Though the phrase “you’ve never heard an album quite like this before” can prove to be tiresome, the fact is, um … you’ve never heard an album quite like this before. Originally released in Australia a year ago, the album is well-crafted and densely arranged. Its diverse musical influences and freewheeling, twisted dance delights were created almost completely from scores of samples of fuzzy, crackly vinyl. Structured like a DJ set, the tracks and samples overlap one another while various vocal loops and sounds are scratched in, providing a damn fine party mix that goes out of its way to avoid being pedestrian. The painstaking recording process took Darren Seltmann and Robbie Chater more than eighteen months to create. As a result, Since I Left You is a trainspotter’s wet dream, lifting dozens of sampled bits from both obscure and famous artists (most notably Madonna, who surprisingly permitted the boys to use “Holiday” on two tracks). Other samples originate from Sergio Mendes; Prince Paul and De La Soul; the Osmond brothers, Debbie Reynolds, the 5th Dimension, the Mamas & the Papas, and dozens more. The album veers wildly, encompassing everything from gooey string-laden vocal tunes from the ’40s and ’50s to dirty funk and disco from the ’70s, to pop and hip-hop from the ’80s and ’90s, with plenty of wink-wink humor tossed in.
—Tim Pratt

There aren’t many bands that can transform a story of an old man building a rickety backyard cathedral into a fist-pumping rocker. But there aren’t many bands as furiously imaginative as Blueline Medic. Formed in Melbourne, Australia two years ago, the band hails from the Jawbreaker school for literate punk rock, a studious place where esoteric stories of cranky church-builders take their place alongside self-deprecating tales of personal woe. Blueline Medic singer and guitarist Donnie Dureau has one of the most powerful voices in emoland; his is a cigarette-roughed cross between Jawbreaker’s Blake Schwarzenbach and the Psychedelic Furs’ Richard Butler. Dureau knows when to shout and when to sing, and he’s equally winsome as Morrissey-style balladeer (“At Least We Had the War”) and raging malcontent (“Shuffle and Scrape”). It’s Dureau’s knack for dropping sublime melody fragments into torrents of fury that elevates songs like “Making the Nouveau Riche” and “Not Interested” to their otherworldly level. The album also benefits from the breathing room carefully built into each song by the rest of the band. Lead guitarist Adrian Lombardi knows how to rip it up, but he’s also talented enough to know when not to play, sending bassist Dave Snow and drummer Shaun Lohoar sailing solo through exhilarating, arching moments of simple rim shots and spare bass chords. The tension generated from that lull/tsunami/ lull dynamic could power a city: wide-screen energy channeled through four sets of electrifyingly creative hands.
—Chris Baty

It’s no news flash that the bay is the undisputed epicenter of super-skilled, next-level DJs. Turntable technicians have been wrecking decks here for many years, becoming celebrities in their own right by bringing the DJ back to the forefront while continuing to advance the game. Billy Jam’s label, Hip Hop Slam, has been instrumental in this process, unleashing a steady stream of cutting-edge scratch music. Turntables by the Bay is a “greatest hits” collection of sorts, comprising 20 tracks drawn mostly from the earlier compilation LP trilogy of the same name. Spanning 1996-2001, it showcases an assortment of local luminaries in fine form, pushing the limits of what can be accomplished with a needle and a record.

Additionally featuring DJ Shadow, Eddie Def, and ISP, Turntables by the Bay is a deep compilation, scratch-filled and experimental, but still highly listenable and fresh.–Brolin Winning

Many jazz lovers would place Billie Holiday at the top of their desert island disc list, but just as many might blithely respond, “God — how depressing!” Holiday gets kind of a bum rap as a downbeat performer, which is mainly due to the notoriety of her personal life rather than her actual recorded legacy. Holiday was a great romantic singer, with a unique combination of emotionality and restraint that has beguiled listeners across the world for decades. Far from being morbid, Holiday’s early repertoire was mainly comprised of run-of-the-mill moon-June love tunes, which she made beautiful and profound simply by being the most gifted torch singer in the history of jazz. Admittedly, during her final years, when drug addiction and a grueling performance schedule ground her down, Lady Day recorded a series of heart-wrenching sessions — as painful for us to listen to as it must have been for her to complete. She died in 1959, a haggard, frail 44-year-old whose body failed her after years of heroin use. It’s this grim, seamy mythology that haunts Holiday’s image, although many fans cherish her early, exhilarating swing recordings — the music that built her legend.

Sony’s new ten-CD box set is the Holy Grail that the Lady Day cult has long been questing for. This collection picks up where Columbia’s once-definitive, early-’70s LPs left off, gathering all of Holiday’s best, most delectable material, into a single elegant, concise package. Spanning from her Depression-era heyday to the end of World War II, when personal troubles began to cripple her career, these recordings feature outstanding accompaniment from some of the most talented musicians of the big-band era, including Benny Goodman, Lester Young, Ben Webster, and Gene Krupa. Holiday’s collaborations with pianist Teddy Wilson, in particular, rank among the most glorious swing music ever recorded. In addition to dozens of well-beloved standards from her Columbia years, this set includes three discs of previously unreleased radio performances and wartime “Victory Discs,” music originally intended only for broadcast to the Allied troops in Europe. Holiday’s playful, silken vocals retain the subtlety and emotional punch of decades past, and while they hold dramatic hints of tragedy to come, these songs still make the world a more beautiful, sensuous place.
—Lawrence Kay

As we brace ourselves for “a new kind of war” and whatever lifestyle changes that may entail, Americans may want to look to the past for examples of how to keep our spirits high and the home fires burning bright. The patriotic war song pretty much died a lonely death during the Vietnam War — with Tony Orlando & Dawn’s “Tie a Yellow Ribbon” the last gasp of this old-fashioned genre. During WWII, though, propaganda songs were perfected to a “T,” and numerous fascinating examples can be found on reissue collections such as these. Many are just feel-good anthems, like “Praise the Lord and Pass the Ammunition,” or simpleminded knockoffs like Bing Crosby’s “Buy Buy Buy War Bonds.” Other songs actually chronicle their times — the darkness as well as the light. The historical gem on the Pearl Harbor collection is Horace Heidt’s “There Ain’t Gonna Be No War,” which perfectly captures the smug isolationism of Americans: “We’re gonna have peace and quiet/ and if they start a riot/ we’ll sit right back and keep score./ The only place you’ll go marching to/ will be the corner grocery store….” Hitler and Hell, a German import, zeros in on political themes, and is jam-packed with incredible material from the worlds of big band, blues, and country. The title track is a preach-and-shout gospel tune that likens Hitler to the devil; also included are classics such as “Stalin Wasn’t Stallin’,” sung in praise of our noble Russian allies, and Texas Jim Robertson’s strident “Last Page of Mein Kampf” (we write it, not the Nazis). Racism also played a huge role in wartime propaganda, as heard on the catchy-but-creepy “Goodbye Mama, I’m off to Yokohama,” where a gleeful bomber pilot declares: “A million fighting sons of Uncle Sam, if you please/ will soon have all those Japs right down on their Japan knees.” So far so good this century with the absence of kill-the-ragheads power ballads, but collections like these may come in handy when we want to remind ourselves how easily emotions can be manipulated by patriotism and art.
—Lawrence Kay

Pump up the Volume

Life and Death According to Bill Cain