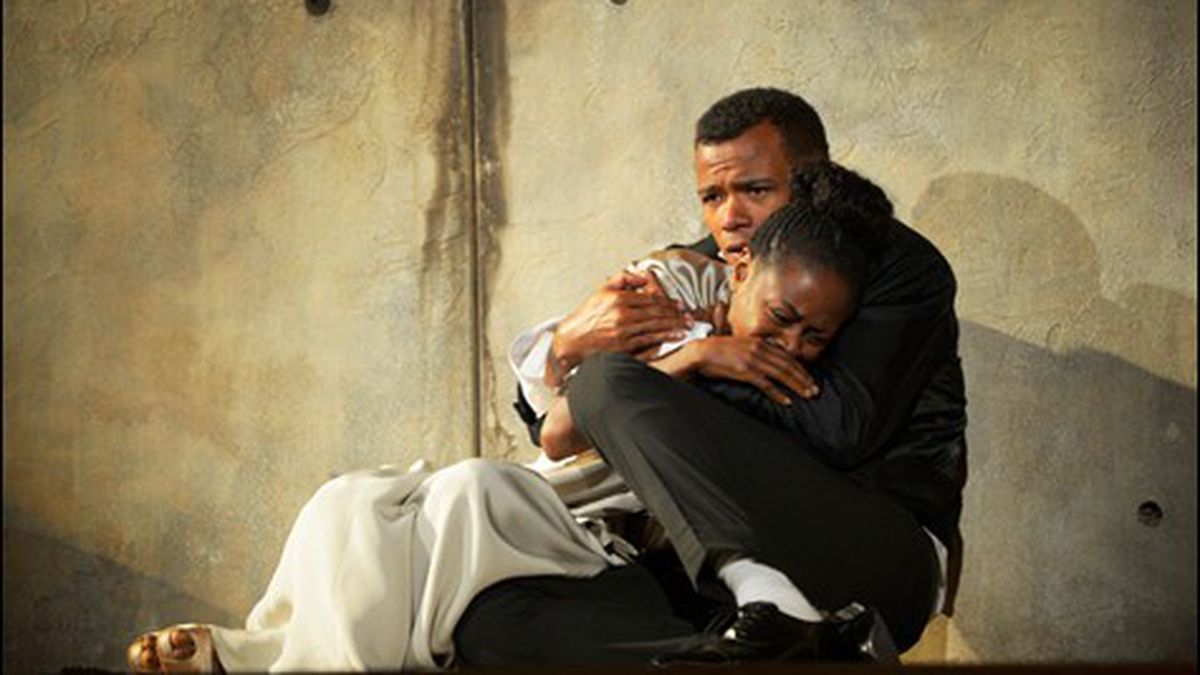 Hamlet might be the hardest Shakespeare play to produce, because much of its storyline is open to interpretation. For centuries, critics have debated the veracity of Prince Hamlet’s madness, the nature of his relationship with his mother, the intentions of his ghost-father, and the reasons for his girlfriend’s suicide. Each scholar brings his or her own reading to the table, and most of them directly contradict each other. Some call Ophelia a consummate victim, drowning herself out of desperation. Others say her death is a feminist act because she rejects a society that treats women as pawns or punching bags. And Hamlet is equally problematic, alternately cast as a hero or a victim, a locus of reason or a wobbly moral compass, a fake madman buying time for his revenge plot or a sensitive girlyman with a “melancholic” disposition.

Such wildly different opinions give directors a lot of latitude when mounting Hamlet for the stage. That’s why Liesl Tommy took the liberty of foregrounding the protagonist’s pathos in her new production with California Shakespeare Theater. Her Hamlet (played by LeRoy McClain) is a brooding romantic, easily jerked by emotions and prone to the kind of “unmanly grief” that Elizabethan society abhorred. In this version, Ophelia (Zainab Jah) is a fully drawn character, rather than a cipher — she’s granted only five scenes in the original text — and Hamlet’s relationship with his mother, Gertrude (Julie Eccles), proves stronger and far more potent than the one with his dead father (Adrian Roberts), who reappears as an apparition. In fact, Tommy cast the same actor to play both the father and the murderous Uncle Claudius, as though to suggest that the two are interchangeable.

Call it a feminine Hamlet, one that’s less invested in revenge plots than in the characters’ interior lives. McClain, of course, is the fulcrum of the play and the one who really makes that distinction. His courtship with Ophelia, largely omitted from the original script, gets amplified in Tommy’s version. Even small details — a passionate slow dance over a Lauryn Hill ballad, or Hamlet tenderly swaddling Ophelia as he delivers the “To be or not to be” soliloquy — help establish their love story. When Hamlet rebukes his lover in a fit of rage, her pain seems palpable. That scene foreshadows a later confrontation between Hamlet and his mother, with whom he has a similarly affectionate, but still tense relationship. Not for nothing does Tommy stage the mother-son dialogue on a giant bed situated prominently at the lip of the stage.

Such artistic choices reveal more about the director than the characters. She could have easily made Hamlet a play about filial loyalty and war — it’s set up as a revenge play, after all — but instead she wanted to hone in on Hamlet’s conflicted feelings toward women. Ostensibly, the prince seeks revenge against his uncle for murdering his father and usurping the crown of Denmark. In this play, though, Hamlet directs all anger at his mother and girlfriend. He accuses Gertrude of adultery and begs her to leave Claudius’ bed. His language isn’t that of a son importuning his mother, but that of a man confronting the woman who jilted him.

Thus, it’s perhaps appropriate that Adrian Roberts, who plays both Claudius and the ghost of Hamlet’s father, is the weakest link in this play. He’s good at looking disinterested and moderately believable as a villain, but isn’t so potent a force as to warrant Hamlet’s attention. At one point, the prince sneaks up with a knife while his uncle kneels at prayer, but doesn’t complete the deed. The reason, he says, is that Claudius might go to heaven. In many iterations of Hamlet, it feels like a missed opportunity. Here, it goes virtually unnoticed.

Tommy’s Hamlet is not much of a revenge story, but it’s a serviceable feminist allegory. After Ophelia descends into madness, she reemerges in a straitjacket and is chased around the stage by a hospital orderly (Mia Tagano). She eventually winds up in a glass fishbowl cage; her death happens offstage. The implication is not so much that Ophelia is a sacrificial lamb in a brute patriarchal society, but more that she finds the society intolerable and reacts accordingly.

It’s a distinction that many contemporary audience members would appreciate, and Jah plays “madness” with a childlike vulnerability that also seems satisfyingly cathartic. The landscape, meanwhile, seems to reflect her and Hamlet’s precarious emotional states. Designed by Clint Ramos, it’s a dried-out swimming pool littered with pink flamingos, overturned plastic chairs, closed umbrellas, and old wine bottles. That environment may seem rather desolate for such a large and complicated play, and yet it’s weirdly apropos. In no other way could Ramos and Tommy show ordinary lives wrecked by the slings and arrows of fortune.

Previous ArticleFormer D.E.A. Chief in Houston: Legal Marijuana Is ‘A Matter of When, Not If’