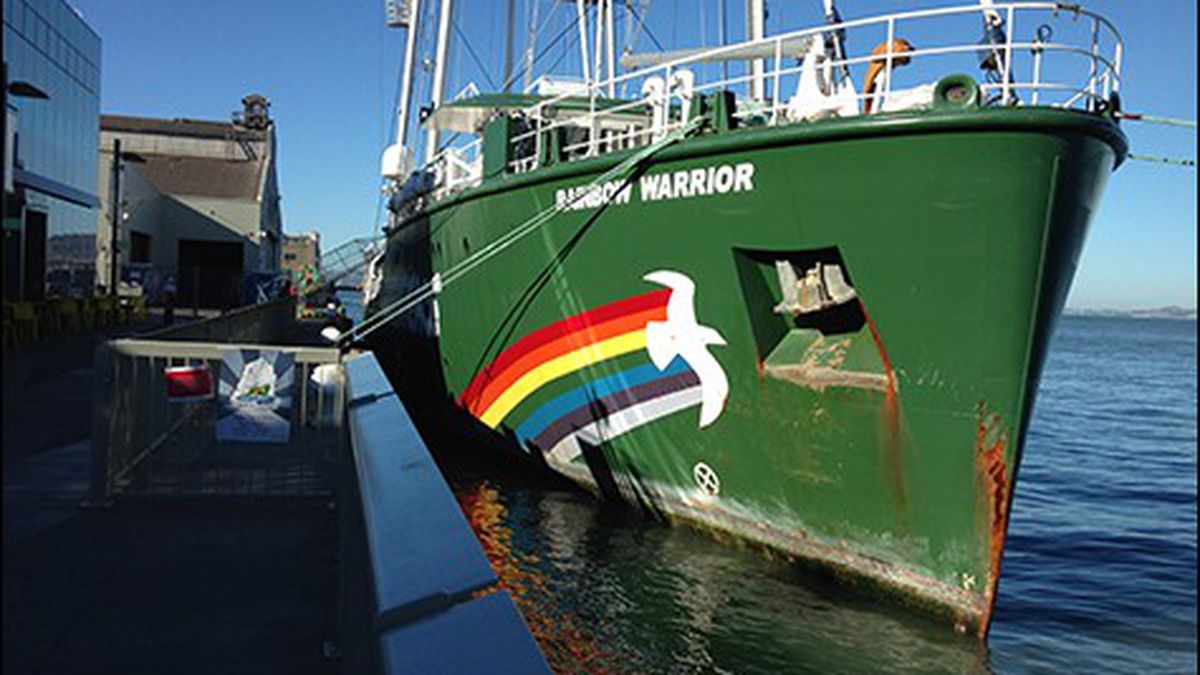 The detention of 28 environmental activists and two journalists in Russia is overshadowing a Bay Area visit by Greenpeace's flagship Rainbow Warrior.

On September 18, members of Greenpeace attempted to board the oil rig Prirazlomnaya, a drilling platform at the center of Russia’s $500 billion investment in Arctic oil extraction. The next day, Russian Coast Guard officers responded by rappelling from a helicopter onto the deck of the ship Arctic Sunrise, an icebreaker owned and operated by Greenpeace. Armed officers held the environmental activists at knifepoint. Dramatic video of the raid released last week depicted the dawn boarding of the Arctic Sunrise in the Pechora Sea, providing a first-hand account of a saga that has attracted attention all over the world.

All thirty people who were traveling aboard the Arctic Sunrise are still being held in a Saint Petersburg jail, where they were transferred from the northern Russian city of Murmansk on November 1. They stand charged with “aggravated hooliganism,” an offense that carries a maximum sentence of seven years in prison. Twenty-eight of the prisoners are Greenpeace staffers — sailors and activists. The other two detainees are Kieron Bryan and Denis Sinyakov, freelance journalists who sailed on the Arctic Sunshine to document the voyage and direct action against oil drilling in the Arctic. Fourteen hundred journalists around the world have signed a petition for their release.

The detention of the activists, dubbed the Arctic 30, and the lengthy prison terms that loom for the detainees could cause a diplomatic crisis. In the midst of this, Greenpeace’s flagship, the Rainbow Warrior, docked at San Francisco’s Pier 15 for a ten-day stay as part of the ship’s two-year maiden voyage around the world. The ship will open to the public until November 19, and will host family activities, an art exhibit, film screenings, concerts, and meet-ups for progressive activists. The Rainbow Warrior is one of Greenpeace’s three ships, along with the Arctic Sunrise and the Esperanza.

Direct actions at sea have been at the core of Greenpeace’s mission since the group’s genesis in 1969. The organization grew out of the peace and anti-nuclear movements in Vancouver, British Columbia during the late 1960s and 1970s. On September 15, 1971, activists sailed a chartered ship, the Phyllis McCormack, into a nuclear blast zone in Amchitka, Alaska.

Although Greenpeace’s numerous direct actions have resulted in scores of arrests and legal action in several countries, the charges faced by the Arctic 30 represent the most serious official reaction to the environmental group’s work since the 1985 sinking of the original Rainbow Warrior off Auckland, New Zealand by scuba divers from the Direction Générale de la Sécurité Extérieure, France’s equivalent of the Central Intelligence Agency. The French wanted to thwart Greenpeace’s planned interference with a nuclear test in French Polynesia. Two French agents pleaded guilty to manslaughter in the death of a photographer who was on board the Rainbow Warrior, and the scandal prompted the resignation of French Defense Minister Charles Hernu.

The Arctic 30’s ongoing plight also strikes close to home for the eighteen crewmembers of the Rainbow Warrior docked in San Francisco. Greenpeace’s maritime crew has an annual rotation of three months on land, and three months at sea on the flagship or the icebreaker. Many of the crew now in San Francisco have sailed with those who are jailed in Russia. “That could have been any one of us,” said Erik Mekenkamp, an engineer aboard the Rainbow Warrior. The wall above Mekenkamp’s desk in the control center adjoining the ship’s engine room is a drawing dedicated to the Arctic 30 of a frog strangling a crane trying to eat it.

Unlike its predecessors, which were repurposed fishing vessels, the $33 million Dutch-flagged Rainbow Warrior was built specifically for Greenpeace and has several design components that will interest avid sailors and casual observers alike. The 190-foot hull has been designed for maximum fuel conservation, and the ship has the ability to travel up rivers and into shallow ports. The ship also is designed to travel long distances under sail — the sails are rigged on two massive A Frame masts. The positioning of the masts allows for a helicopter pad at the stern and an insulated storage shed that is large enough to hold a small helicopter. Two rigid-hulled outrigger boats are used for direct actions, such as sending climbers up anchor chains or onto oil platforms. The unique generator capacity and sails means the Rainbow Warrior can remain at sea for months at a time — since launching in 2011, it has remained at sea for a maximum of 60 days and has a range of 4,500 nautical miles. The ship also has its own desalination plant and a trash compactor that freezes waste for disposal onshore.

The most recent version of the Rainbow Warrior was built with the intention of serving as a floating platform for independent research and observation. Though 18 people currently crew the vessel, it can sleep 32 and has the capacity to store small submarines and research equipment. Providing the opportunity for independent observation of delicate environmental situations and catastrophes is critical, said Greenpeace spokesperson Kat Clark. “There are so many illegal acts happening in our oceans right now that are not in the public eye,” said Clark, from overfishing to waste dumping to hazardous oil spill cleanups. Greenpeace’s ability to put independent researchers in sensitive areas was highlighted during the 2010 Deepwater Horizon oil spill in the Gulf of Mexico, when Greenpeace brought scientists to the spill zone onboard the Arctic Sunrise to examine the spill’s impact.

To date, the new Rainbow Warrior has only engaged in one action, in which it blocked a shipment of pig iron — which is used in steel-making — from the Brazilian port of San Luis in the Amazon. Daniel Brindas, an activist with Greenpeace’s forests campaign, said the Rainbow Warrior‘s two outrigger boats carried climbers to a giant mound of pig iron and up two cranes, where they prevented the iron from being loaded onto a US-bound ship for ten days until winning concessions from the local government on land-use laws. About 90 percent of pig iron produced in the Brazilian Amazon is shipped to the US, and Brindas said the industry drives illegal logging, deforestation, and the displacement of indigenous tribes in the rainforest.

Aside from hearing about Greenpeace’s global activism and touring the ship, visitors will also be exposed to a vessel that is the beating heart of the activist organization. A four-foot tall carved wooden dolphin named Dave — a hand-me-down from the previous Rainbow Warrior — is mounted at the ship’s prow. For years, there had been a rumor that Dave had been converted into a time capsule by previous crew members. When the current ship’s contingent opened Dave up, they found necklaces and messages from a Rainbow Warrior crew from the 1980s.