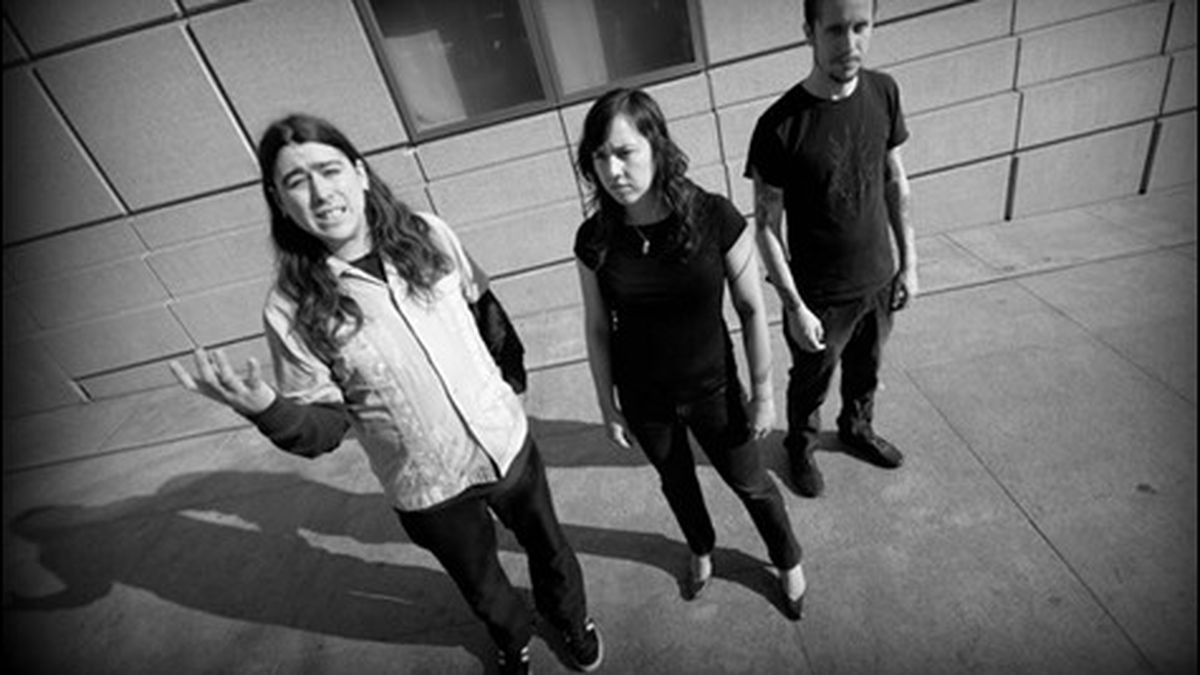 San Francisco cello-driven band unleashes a heavier sound on All We Destroy.

If you think you’ve heard a lot of deep wooden sawing on metal albums lately, chances are it’s the work of San Francisco cellist Jackie Perez Gratz. Classically trained and raised by classical-musician parents, Perez Gratz has become the metal community’s go-to string player. As such, she gets asked to play on a lot of records, so she has to be picky. So far, her list of credits includes Amber Asylum (of which she was a member for ten years), Giant Squid (of which she is a current member), Asunder, Agalloch, Neurosis, Om, and Cattle Decapitation. But her own project, Grayceon, is where she really lets loose.

The trio’s new album, and first on the Profound Lore label, All We Destroy, has the San Francisco band moving in a heavier, looser direction. Opener “Dreamer Deceived” launches into a doomy riff with Perez Gratz shrieking over her melodic vocals. The band puts a strong emphasis on loud-soft dynamics as well as ever-changing riffs and parts. There are moments when the drums drop out completely (“We Can”) and Perez Gratz sings mournfully, as in the cello-driven lamentation “Once a Shadow.” Cello and guitar take turns playing the lead, and often interweave melodies that play off each other.

The shifts were a natural part of the band’s evolution, Perez Gratz explained. “As we’ve progressed as a band, we’re constantly trying to do new things because it’s fun, and because of that it definitely sounds different,” said the cellist, sipping a fizzy, decidedly un-metal non-alcoholic drink at The Royal Cuckoo bar in San Francisco’s Outer Mission a few weeks ago.

While some songs on the new album came together easily, others took more effort to flesh out. The musicians kept tweaking “A Road Less Traveled” right up until the recording process. “It’s based off of feel, and trial and error,” the soft-spoken Doyle said. “Seeing what feels best.”

“You can spend two months figuring out what to play over a thirty-second part of a song,” added drummer Farwell, who helps with song arrangements and appears to be the band’s biggest cheerleader. (“Fun” and “awesome” were adjectives he used frequently.) “It’s hard and easy at the same time,” he continued. “Some parts come completely natural to us and some parts, we can’t play it — we literally have to teach our bodies how to play this stuff.”

The most obvious change from the band’s past work is Perez Gratz’s vocals. She screams more than she ever has — a result of having joined Giant Squid, she says. Lyrics were also more integrated into the songwriting process. Instead of writing lyrics at the very end, as Perez Gratz did with Grayceon’s prior two albums, this time she wrote them concurrently with the music. However, Doyle and Farwell didn’t hear the vocals until the tracking process because, as Farwell put it, they have a “shitty” PA system.

As opposed to the band’s second album, This Grand Show, which evolved around a distinct theme, All We Destroy is simply a collection of its latest material. It was written over a year and a half, and recorded at Atomic Garden Recording Studio in East Palo Alto by longtime friend Jack Shirley. Doyle plays all his songs with his fingers instead of a pick, which gives the whole album a decidedly earthy vibe.

In a way, the sound of All We Destroy is distinctly Bay Area. Grayceon is part of a community of bands rising to the level of national (albeit still underground) consciousness — a scene that’s distinct from the Bay Area’s thrash roots and stoner metal contingency. “We’re much more exposed to non-commercial music, whereas I think some young kids living in Boise, Idaho, they’re probably getting force-fed more mainstream stuff,” said Perez Gratz. “I’m not surprised that a big city is producing stuff that’s more fringe, non-traditional.”

Toronto-based label Profound Lore was the first to really capitalize on this scene. Despite being based in another country, label founder Chris Bruni has become somewhat of a champion of the Bay Area scene — as well as having signed experimental acts such as Australia’s black-noise behemoth Portal, doom band YOB, and Portland’s elusive black metalers, Agalloch. Among the local bands on his roster: Amber Asylum, Asunder, Ludicra, Slough Feg, Worm Ouroboros, and now Grayceon. Bruni is kind of doing for these bands what Frank Kozik‘s Man’s Ruin label did for the local stoner-rock movement in the Nineties: exposing them to a national — and even international — audience.

Despite the seemingly novel idea of pairing stringed instruments in a metal band, the concept is hardly new. Locally, Worm Ouroboros and Amber Asylum also feature strings, as does the group Judgement Day, which markets itself as “string metal.” However, that latter trio (which features cello, violin, and drums) plays largely to a non-metal crowd, and isn’t part of the metal scene, per se. Grayceon, by comparison, feels like a heavy band that happens to have a cellist — and largely appeals to metal fans.

For Perez Gratz, however, playing her cello in a contemporary context wasn’t an obvious move. Though she had been taking lessons since first grade, she put the instrument down after high school. Then, while attending the San Francisco Art Institute, Perez Gratz would practice in a stairwell that had amazing acoustics. Her playing eventually reached the ears of Amber Asylum’s Kris Force, who taught at the school and had been searching for a cellist to join her band.

Initially, the transition to an improvising metal musician proved difficult. “When you’re classically trained, you’re only playing other people’s music,” said Perez Gratz. “And everything about the music is dictated to you: what volume to play, how fast to move your bow, what kind of attack to use on your bow, the note, what key to play in, the length of the note. And I was petrified of writing when I first started playing in Amber Asylum.”

Luckily, Amber Asylum’s music was conducive to improvisation thanks to its slow, repetitive song structures. After ten years of playing in that band, Perez became adept at writing her own material. And that’s what eventually caught the ears of Doyle and Farwell. “We had been playing in Walken for a long time,” Doyle recalled. “We got to know Jackie seven, eight years ago just through friends and through the music scene. We were both fans of her work in Amber Asylum and thought it would be amazing to incorporate her.” After hearing a recording of a song they had written, Perez Gratz was in.

Getting signed to Profound Lore was certainly a coup for Grayceon. It gives the musicians a kind of instant street cred — so no doubt the band’s fan base will increase just by being associated with it. For Profound Lore, it’s an obvious fit. Grayceon was shopping for a new label (it had been signed to DC-based Vendlus Records) and put together a demo. “We had met Chris Bruni when Grayceon was on its first tour in Toronto,” Perez Gratz recalled. “He was a fan and knew me from working with me [in Amber Asylum and Asunder]. And when I approached him with this new demo, he was like, ‘Yeah, just send it.’ And two days later he was, like, ‘I love it, let’s talk.’ So he’s definitely been championing us for sure.”

In the new band, the cellist faced another learning curve — how to play faster and more intricately. “Playing with these guys was very challenging,” she recalled. “Not writing, but just playing faster and having to remember a lot more …. It can be tiring.” Doyle and Farwell also found themselves starting from scratch, so to speak. Doyle had devised a new tuning (which remains a secret) while Farwell was making the transition to drums, having been a bassist prior. Accordingly, Perez Gratz had to figure out a tuning that would allow her to play open strings and double stops (two notes at once), which turned out to be a half-step down from regular classical tuning. The result created a more dynamic, experimental template. “We were starting at the ground level,” Farwell said. “So the sky was the limit.”