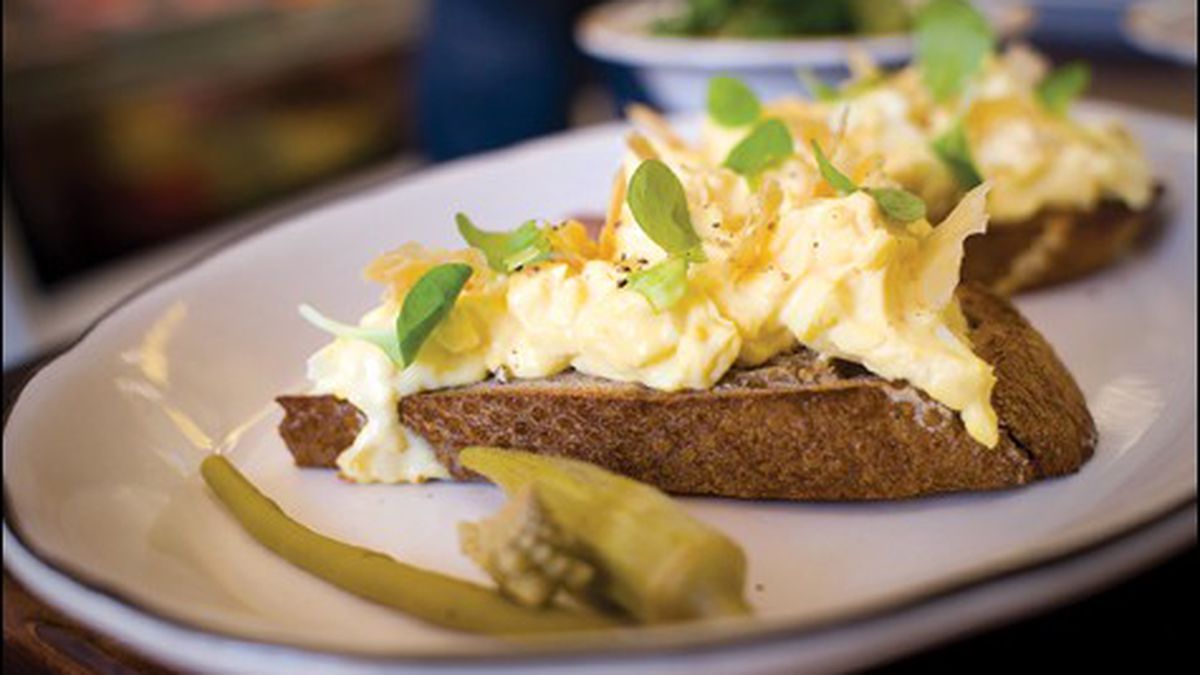 I discovered Grand Lake Kitchen, a shiny new deli in my neighborhood, just days after it opened. Within weeks — though it was still too early for me to don my fake ‘stache and start logging official review visits — I’d already become something of a regular.

On Saturdays, on my way home from the Grand Lake Farmers’ Market, I’d snag a Beauty’s bagel and a cup of coffee. One evening, needing a starch to round out a weeknight dinner, I picked up a tub of the deli’s excellent house-made macaroni salad (a mild version, flecked with tuna). Over Thanksgiving, wanting to offer out-of-town guests a savory little snack, I stopped in to buy a bag of 4505 Meats’ legendarily addictive chicharrones — one of several surprising finds in the deli’s small, but well-curated, grocery section.

By the time the industry-standard six-week “no review” grace period had passed, I’d already worked my way through about half the menu. Suffice it to say, I like the place.

Co-owner May Seto said that she and her husband, chef David Wasem, didn’t initially plan for their first restaurant venture to be a delicatessen. But then they found a location they loved, a former office space just a short walk from the Grand Lake Theater, and decided to build their business around what the neighborhood needed (novel concept!) — in this case, a quick grab-and-go option that wasn’t pizza or fast food. So, a deli it was.

Still, Grand Lake Kitchen defies easy categorization. It isn’t a traditional Jewish deli (there’s no pastrami — they’re still looking for one they like — and pork is featured prominently). It also isn’t one of those places where, on point of pride, every single item is made from scratch in-house. They aren’t making their own sausages or cold-cut meats; they don’t bake their own bread. Seto makes no bones about the fact that the deli lacks the square footage to do as much of that kind of thing as she and Wasem might like.

Yet, in spite of those limitations, the deli already fills at least three or four different niches for a neighborhood that didn’t have a great sandwich shop, or a cozy diner, or a posh grocery store carrying obscure sodas and organic baby food. Small as it is, the deli is as close to a one-stop shop as you’ll find in the general vicinity of Lake Merritt, short of hoofing it over to Whole Foods.

Seto said the restaurant plans to launch a non-sandwich-centric dinner menu sometime in the next month, but for now, a rotating list of ten or so different sandwiches — both hot and cold — is the big selling point. One featuring roasted pork belly was an understated, but delicious, riff on porchetta — the meat tender and fatty, but not over the top. Served with pickled fennel (for crunch) and a vinegary chimichurri sauce (to cut through the heaviness), it was a textbook example of smart, balanced sandwich design.

And Wasem’s take on a Cuban sandwich, while not entirely authentic (pork tenderloin, ham, Swiss cheese, and pickles served — gasp — on grilled sourdough), is good enough to give the one sold around the corner at Caña — an actual Cuban restaurant — a run for its money.

Grand Lake Kitchen’s pièce de résistance is the open-faced egg-salad sandwich that Seto and Wasem have dubbed the “Oyako,” after that wonderfully morbid expression (literally, “mother and child”) the Japanese use to describe chicken-and-egg dishes. Wasem’s egg salad has the perfect smooth consistency — the yolks mashed to a fine crumb, the mayo plentiful. The “chicken” component? Thin shards of crispy chicken skin, which turn humble comfort fare into something decadent — one the most delicious things I ate all last year, and a dish ogle-worthy enough that three different passersby stopped at my table to ask what I was eating.

In addition to the sandwiches, there are a couple of soups every day (my favorite was a thick and satisfyingly meaty split pea soup) and a deli case stocked with mostly-vegetarian side dishes. It’s in these offerings that you’ll find the biggest element of seasonality. I especially enjoyed an uncharacteristically refreshing winter vegetable prep: Tokyo turnips (grilled until slightly caramelized and wonderfully juicy) served cold along with the turnips’ bitter, chile-spiked greens.

But that small side dish cost me $5 — half the cost of my sandwich. Indeed, the biggest fault I’ve found with Grand Lake Kitchen is that the prices are sometimes a bit high for the portion size — the sandwiches, while not exactly dainty, aren’t constructed with massive appetites in mind, and the only side they come with is a few house-made pickled things (which, to be fair, are excellent). The addition of, say, a small scoop of potato salad would feel more generous.

One more quibble: Any Bay Area restaurant making even a token nod toward seasonality really shouldn’t serve tomatoes in December, so it irked me when the deli put a BLTA (bacon, lettuce, tomato, and avocado) on the menu. If it were possible to have delicious out-of-state tomatoes shipped in, I wouldn’t grouse on principle alone — but no, these were as mealy and flavorless as you might expect.

Anyway, Seto and Wasem are still working out some kinks — tweaking the menu, fooling around with different breads and condiments. But to their credit, in Grand Lake Kitchen, they’ve already created a cozy space that feels like a cross between an old-fashioned diner and a corner bistro: stools tucked under a long counter, tables on the sidewalk that are perfect for people-watching when the weather is nice — when the sunlight sparkles on the surface of the lake and, your belly full of egg salad, it’s easy to feel like this slice of Oakland is the best little neighborhood in the world.