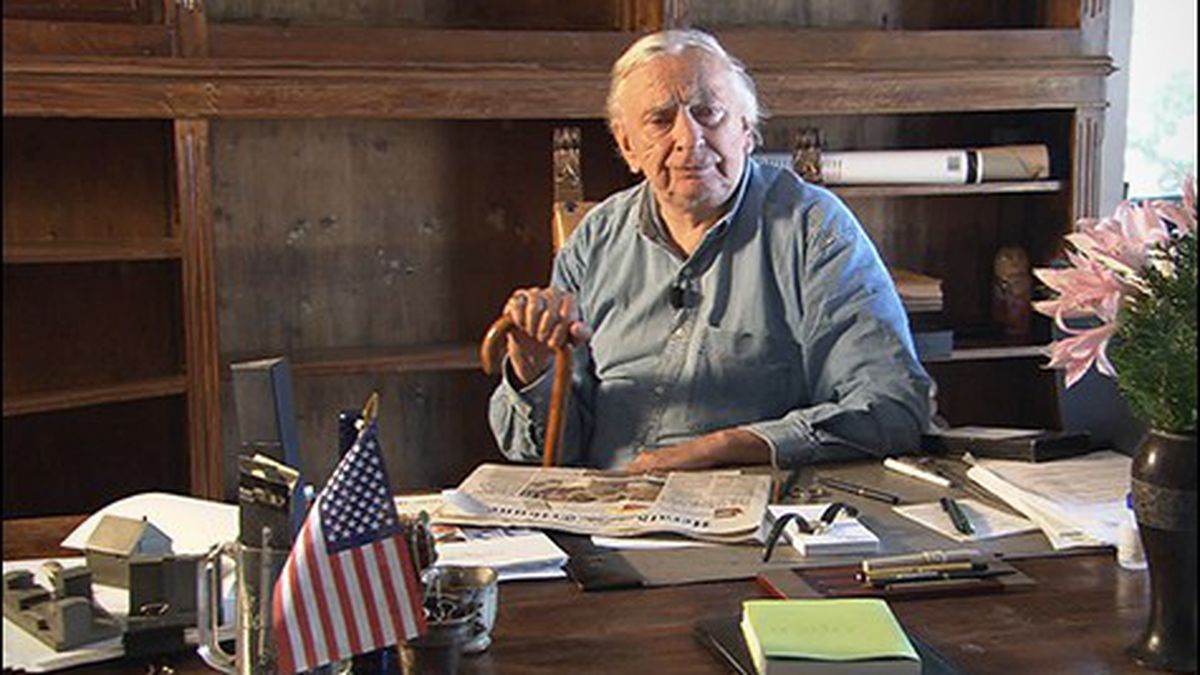 Introducing Gore Vidal, Naysayer-in-Chief. “The People Who Can Say No” may be one of the smaller subcultures in the increasingly balkanized USA, but they already have a readymade figurehead: the late novelist, essayist, screenwriter, playwright, debater, and political gadfly Vidal (1925-2012), subject of the entertaining new documentary Gore Vidal: United States of Amnesia. Among professional contrarians he remains the most contrary of them all.

He was the ultimate insider who shaped himself into the epitome of the pesky outsider. His maternal grandfather, Thomas Gore, was an anti-war Democratic US Senator from Oklahoma whom the young Vidal idolized. Gore’s father, Eugene Vidal, was a pilot and aeronautics entrepreneur as well as a member of President Franklin D. Roosevelt’s cabinet. His mother, oft-divorced socialite Nina Gore Vidal, went on to marry into the extended families of Jacqueline Bouvier Kennedy Onassis and President John F. Kennedy. Raised in the upper echelons of Washington, DC, and an Army veteran of WWII, Vidal had every opportunity to become a vested establishmentarian.

But, as Nicholas Wrathall’s kaleidoscopic documentary delightedly points out, he traveled his own path with the certitude of a Panhandle tornado. Vidal insisted on making his living as a writer, and his early success, a frank novel of homosexual life called The City and the Pillar, branded him forever as a gay spokesman — even though he practiced what he called “pansexuality.” He was also a self-proclaimed atheist and humanist. For the rest of his writing career, the über-prolific Vidal alternated between novels, Hollywood screenplays (Ben-Hur and the outrageous Caligula), Broadway stage plays, and a series of polemical essays of escalating skepticism. The target was almost always the crimes of the American empire (“I write about people who have power and who exert power and who put power on other people”). In his later years, during which he specialized in such historical novels as Burr, Lincoln, and 1876, acid dripped from his typewriter.

No public figure was safe from Vidal’s righteous scorn, not even his friend JFK (“one of the most disastrous presidents we’ve ever had”) — for his involvement in the Bay of Pigs and the Vietnam War — nor Vidal’s putative successor as watchdog, columnist/provocateur Christopher Hitchens, who in Vidal’s estimation sold out to the Neo-Cons over the invasion of Iraq during the reign of Bush Junior. Vidal’s most publicized feud took place during the 1968 Democratic convention, when he and rightwing commentator (and fellow patrician) William F. Buckley got into a hair-pulling spat on network TV. Ratings soared.

Vidal’s contentious nature, in combo with his lifelong fast-lane connections, earned him a wide circle of admirers, some of whom — writer Jay Parini, actor Tim Robbins, muckraking journalist Robert Scheer, singer Sting — turn up as talking heads. When Vidal moved to a gorgeous seaside villa in Ravenna, Italy, with his longtime companion Howard Auster, pals like Paul Newman and Joanne Woodward, Bruce Springsteen, and ex-USSR premier Mikhail Gorbachev dropped by for cocktails. But guilty pols usually ran when they saw him coming. Vidal on G.W. Bush: “We’ve had bad presidents in the past but we’ve never had a goddamned fool.”

Director Wrathall keeps the opinions flowing in a steady stream, with wonderful TV and movie footage. As Vidal got older his views grew more pessimistic, if possible. Onscreen he maintains that after the predictable catastrophe of 9/11 (“We’ve made a lot of trouble for ourselves”), G.W. Bush got rid of Habeas Corpus and due process of law in the name of the “War on Terrorism,” and “Now we have a totalitarian government. We are totally policed.” Obama’s election did little to cheer Vidal: “Once a country is habituated to liars, it takes generations to get the truth back.” His gloomy prognosis: “You can’t expect democracy from a society like this.” Gore Vidal has now gone on to that great Roman Senate in the sky, and we citizens emerge from this sour doc completely satiated with bitchy, bitter laughs. It’s scant comfort, but you’d have to be crazy to miss it.