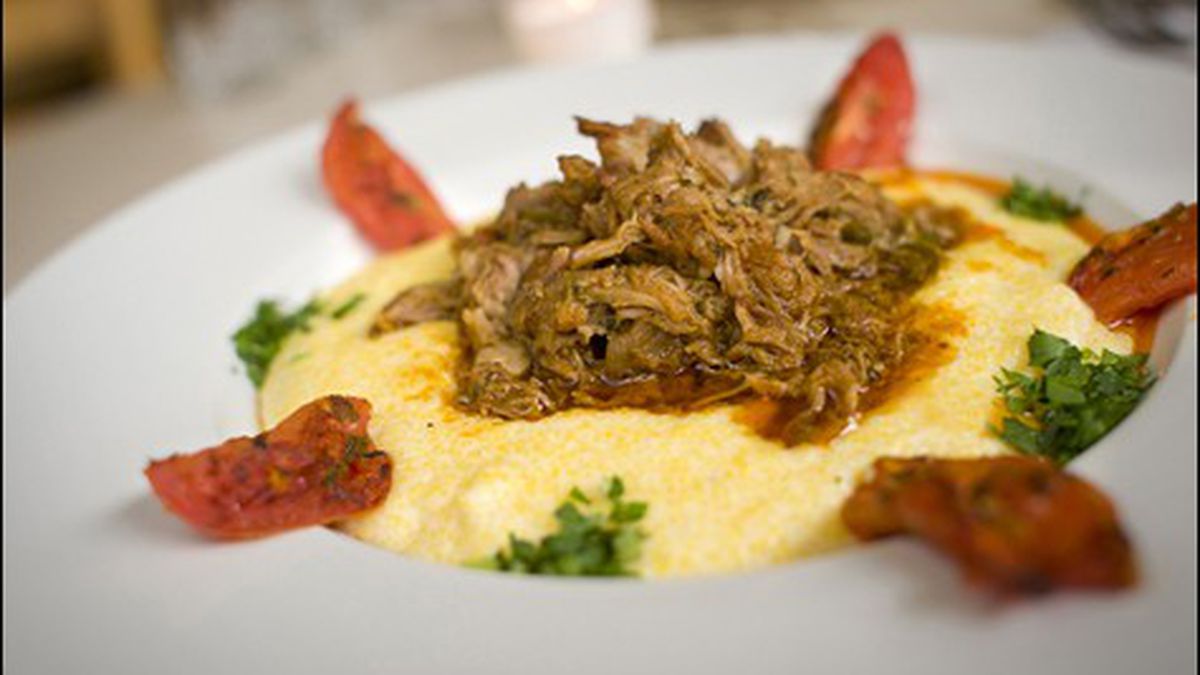 The Westside Cafe has been famous for its meal-size muffins, corned beef hash, exemplary cinnamon rolls, and hippie-dippy service for a quarter-century. But last October, the family-owned and -operated hangout took the plunge by inaugurating a dinner menu upscale enough to pass muster in the Gourmet Ghetto, yet affordable enough to not quite alienate the joint’s longtime neighborhood clientele. The neighborhood in question is funky bayside West Berkeley, an urban enclave rich with mixed-use artsy-industrial ambience — Fantasy Studios and the Sawtooth Building artists’ lofts are within a block or so, Ashkenaz and 924 Gilman are just down the road, and Cafe Fanny, Bette’s Oceanview Diner, and other classy-casual dining options keep the locals well fed.

The newly renovated space looks and feels like a second-tier dim sum restaurant with its pressed-wood furniture, condominium-style carpeting, Lido Deck bar, and acre or so of dining space. But displays by local artists change on a regular basis and add a hint of warmth to the surroundings, and the service we encountered on our visit was friendly, welcoming, and enthusiastic. (Due to an address mix-up we arrived only fifteen minutes before the kitchen closed, but were never made to feel rushed or unwelcome in any way.)

Our server started us off with a complimentary bowl of light and crunchy fried chickpeas dusted with smoked paprika, a snack irresistible enough to disappear within a minute or so. The Aztec hominy soup was just as yummy, a rich, warming bowl of tender hulled corn, creamy avocado, a hint of lime, and broth-soaked tortilla chips, perfect on a cold, rainy night. Another starter, the marinated squid salad, wasn’t as impressive; although it boasted peppery field greens, chunks of juicy tomato, and lots of tender calamari in a creamy lemon dressing, the dish lacked that indefinable zest and oomph that separates special-occasion out-to-eat vittles from something you’d toss together at home.

Our favorite entrée was the pulled pork: One taste was enough to banish the lingering effects of a troublesome day and inspire feelings of general good fellowship, exactly the effect you want from really fine barbecue. Westside’s version was slow-cooked to the juicy, tender, almost creamy stage, with plenty of spicing to keep things snappy, and was served on a bed of exponentially lush polenta that cushioned the pepperiness of the meat nicely. The Cajun gumbo, served with several plump, juicy shrimp, also had a spicy snap to it, but its roux was on the thick and goopy side and its andouille sausage overcooked. We expected the lamb to be as dry and tasteless as it usually is anywhere outside of a top-dollar dining room, but the Westside’s grilled fillets were juicy and tender and served with hot, creamy roasted Yukon potatoes, a tasty tangle of olive oil-perfumed braised spinach, and a warm, earthy mint jus, a marvelous alternative to the lamentable mint jelly. And the sautéed chicken livers were big, pink, and creamy inside, draped in an oniony mushroom cream sauce jazzed with bourbon and served on house-baked crostini to soak up all those sweet, potent, pungent flavors.

The Westside also grills a number of panini using its own house-made focaccia. The vegetable varietal was packed with sweet, tender, slow-roasted carrots, tomatoes, and zucchini; greens for roughage; and creamy mozzarella, then grilled until the bread was nice and crunchy and the cheese pleasantly molten: a warm gooey, substantial snack.

For dessert there’s a bread pudding that’s less creamy and dreamy and more rustic and wholesome than the traditional, but the bits of orange peel were nice. The panna cotta was another departure from tradition — instead of the feathery, ethereal texture and simple cream-and-sugar flavor we know and love, we were served a dense, pudding-like block of non-stimulating bittersweet chocolate with whipped cream on top. But the fruit crisp was an unpretentious treat — blueberries and blackberries and a few bits of apple barely held together by some buttery oatmeal crumble.

As a groovy West Berkeley hangout, it’s inevitable that the Westside would offer several vegetarian-friendly options. There are snacks like the fried chickpeas; a platter of olives and house-pickled veggies; and a cheese plate accessorized with house-baked levain, glazed walnuts, spicy pepper jam, and figs marinated in port. Openers include the Aztec hominy soup as well as a vegetarian black-bean chili with jack cheese, salsa fresca, and avocado, and a chopped garden salad with apple, romaine, jicama, beets, radishes, goat cheese, sunflower seeds, and black-eyed peas. Heftier meat-free options include the roasted root vegetable panini, a crepe stuffed with vegetables of the season, and a baked ancho chili pepper stuffed with grilled corn, jack cheese, cilantro, and scallions. At breakfast time, don’t overlook the bakery’s vegan (and wheat-free and sugar-free) scones, cookies, and muffins.

The Westside’s rotating wine list, while brief, offers intriguing yet affordable ($20-$40 per bottle) vintages from France, Spain, Italy, and the California Wine Country. A dozen are available by the glass. There are also nine draft beers that change on a regular basis, Pabst Blue Ribbon and Guinness by the bottle, and several of those cutting-edge California cuisine cocktails that make modern imbibing so adventurous. (One martini variation replaces the olive with a marinated squid tentacle.) The Crimson Blush was a crisp, bracing shakeup of vodka, lime, persimmon, and house-brewed cranberry nectar, while the Autumn Brackle combined Grand Marnier, orange bitters, and a splash of prosecco into a lush, smooth digestif accented with blackberries. The cafe also sports a complete espresso bar, and among the other nonalcoholic options are papaya juice, birch beer, crushed blackberry herbal iced tea, and locally brewed kombucha on tap. Despite the occasional misstep, this invigorated neighborhood hangout boasts more potential than ever.