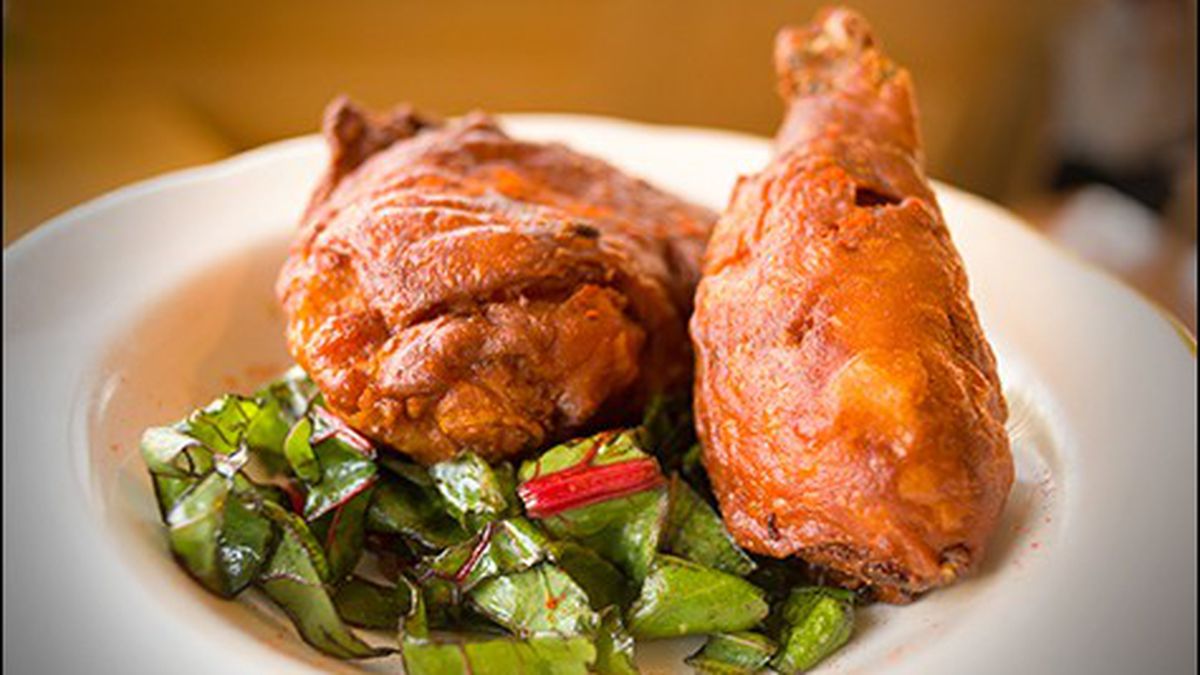 Grease Box is a gluten-free restaurant, but the fried chicken and barbecue are pretty good by any standard.

There’s a great episode of PRI’s This American Life in which writer (and wheat-allergy sufferer) Sarah Vowell talks about her love-hate relationship with Living Without, a food allergy magazine wherein “supposedly cheerful events like parties and picnics are treated like the death traps they are” and sage advice like “Before going out to a dinner party, eat first” is dispensed.

These days, things seem less dire. Public awareness of various dietary restrictions is higher than ever, and, in particular, many restaurants now offer gluten-free dishes to meet a growing demand.

Nevertheless, Lizzy Boelter, the chef-owner of Grease Box — a new gluten-free Southern restaurant — said that ever since she was diagnosed with celiac disease four years ago, she’s been frustrated with the quality of the food marketed toward the gluten-intolerant, much of which uses xanthan gum and other additives to emulate the effects of wheat gluten.

So, when Boelter had the chance to open Grease Box — a cute little spot with a country-store vibe, located in a quiet neighborhood in North Oakland — she wanted it to be a place where the food is, as the restaurant’s website puts it, “gluten free, gum free, weird shit free, locally and sustainably sourced, and AWESOME.” She wanted to serve the unapologetically deep-fried, gut-busting cuisine of her native Louisiana, but healthier, in a way that would highlight local, seasonal produce. Most importantly, in spite of the gluten-free stipulation, she wanted to serve real food.

Grease Box’s signature dish is skillet-fried chicken, which Boelter started out slinging at assorted pop-ups and underground food markets. It is, by any standard, excellent fried chicken, with a shatteringly crisp, deep-walnut-brown batter shell and meat so juicy that it practically gushes when you bite in. Boelter uses on-the-bone drumsticks and thighs, and her batter is a blend of chickpea flour (for flakiness), millet flour (for crunch and chew), and white wine (which tenderizes the meat). I’d have preferred for the chicken to be seasoned more aggressively, but it was otherwise beyond reproach.

Now that Boelter has a brick-and-mortar home, Grease Box’s offerings have expanded to include a full breakfast menu (pancakes, egg dishes, and baked goods) and, for lunch, a selection of sandwiches. After six o’clock, the restaurant serves barbecue, which is the other area where it shines: The Texas-style beef brisket had crisp, caramelized fatty edges and a gentle smokiness from the six-plus hours the meat spent in the smoker. The brisket was simply seasoned — just salt and pepper — but flavorful enough to enjoy as it was, though each order of ‘cue comes with a little tub of Boelter’s sweet house-made barbecue sauce, served on the side by default, as any self-respecting barbecue joint should do. (Leftover brisket gets served cold as a sandwich the next day.) Even better were the subtly boozy whiskey-jalapeño pork ribs, which had a pleasant heat to them, with the roasted peppers still clinging to the ribs.

Each dinner plate comes with three sides, which diners choose from a long list that highlights whatever vegetables are in season. I especially enjoyed the flavor-packed sautéed greens; the cubes of salted watermelon; and the red-okra “fries,” which had been sliced lengthwise into thin, sharp spears. I didn’t much care for the rainbow chard “slaw,” which wasn’t really a slaw at all, but fans of kale salads might find it right up their alley. The only clunker was the millet-based buttermilk biscuit: It was so hard and dry, I couldn’t manage more than a couple of bites.

Other baked goods at Grease Box fared better. A peach corn muffin would have fit right in at any high-end coffee shop, gluten-free or not. And Boelter’s dense house-baked bread, which replaces wheat gluten with a blend of chia seeds and psyllium seed husks, was probably the best gluten-free bread I’ve had. When served unheated, it lacked the softness of a good wheat-based sandwich bread. But toasted, it was delicious — crisp-edged, faintly chewy, and slightly sweet: a perfect vehicle for butter and honey. So it is that one of my favorite items at Grease Box was the simple, classic grilled cheese sandwich, made with high-quality cheddar cheese and plenty of butter.

All of this said, customers seeking a polished sit-down dining experience may find a few nits to pick. My biggest complaint: The food takes an awfully long time to come to your table, especially during dinner — nearly forty minutes on one occasion. Part of the problem is that, for a small restaurant with a shoestring staff, Grease Box is perhaps a bit overambitious. I loved the luxury of having a dozen side dishes to choose from. But I would have been just as happy with half as many options if it meant the kitchen was able to dish the food out more efficiently.

Meanwhile, the ‘cue coming out of Boelter’s smoker is good enough to place Grease Box in the upper tier of East Bay barbecue joints, but the amount of meat on the $14 brisket plate was pretty miniscule. Barbecue purists would gladly give up a side or two for a little more beef — or, better yet, a by-the-pound, meat-only option. (The ribs were a decent portion for the price.)

In any case, these are likely minor quibbles for the gluten-intolerant. Grease Box is, to my knowledge, the only entirely gluten-free restaurant in the East Bay, and the food is tasty enough that there’s no reason for any gluten-free diner with even a passing interest in Southern food to not be a regular customer.

Interestingly enough, the word “gluten-free” doesn’t appear on any of the signage or on the menu at Grease Box. And there were moments when I really did forget that I was eating at a gluten-free restaurant. All I thought was, “This is some damn good barbecue.”

Indeed, Boelter thinks a number of her customers don’t even know the food at Grease Box is gluten-free. And that, she said, is the highest compliment anyone could give: “Then I’m just a restaurant. I’m not a dietary restriction.”

Facebook
Twitter
Previous articleGot a Complaint or Comment About the 51 Bus Line? Come to These Meetings:
Next articleWednesday Must Reads: Obama to Nominate UC Berkeley Prof to Run the Fed; California’s Response to Obamacare Called “Phenomenal”
18,632FansLike
0FollowersFollow
67,429FollowersFollow