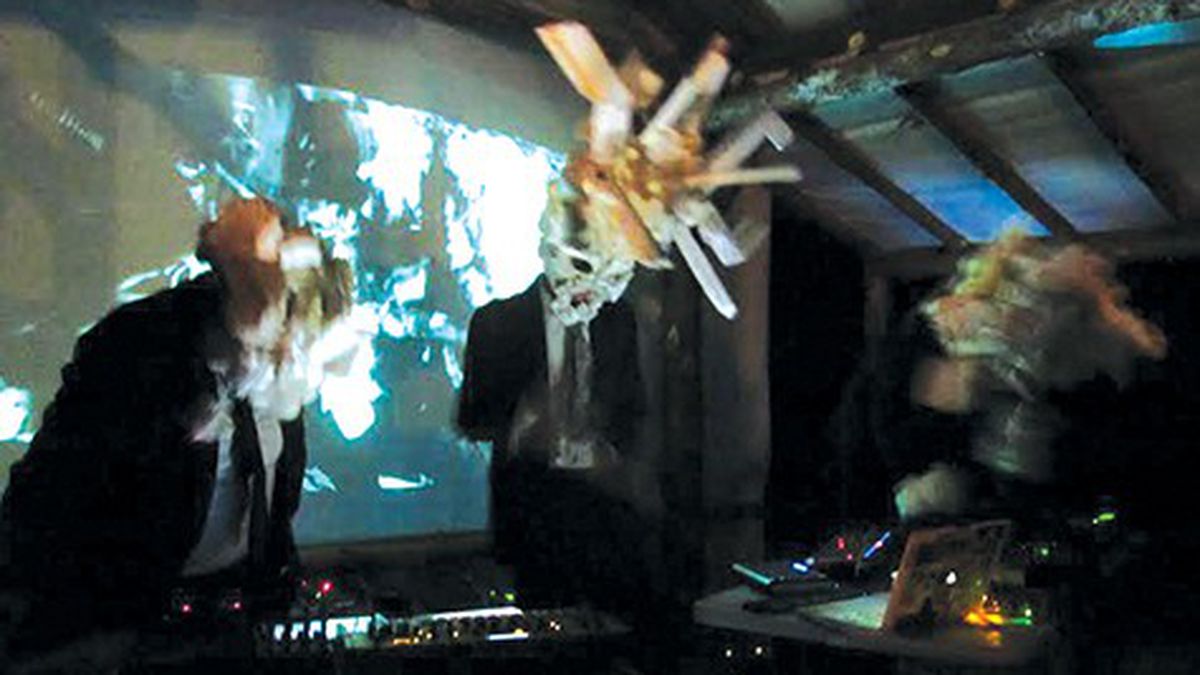 Styrofoam Sanchez is a conceptual project involving a futuristic vision of unformed garbage-humanoid hybrids. The band, which began performing in 2009, grew out of Nerfbau, a noise project from two of its members. Known for its frequent, chaotic live performances, which incorporate disorienting visual projections. The band has released two split-recordings (the first in 2011, featuring The Haters, Crank Sturgeon, and P.C.R.V; the second in 2012, also with Crank Sturgeon), and a cassette (Fish Carry Guns, 2011).

The Mental Spaghetti performance was part of an ongoing national tour to support Styrofoam Sanchez’s first full-length LP, Empire Underwater, released via Oakland imprint Ratskin Records. The title turned out to be more literal than the band expected. “We played in a basement space, and there was a leak, and the room flooded with five inches of water,” recalled Styrofoam Sanchez (which, in order to retain the integrity of its vision and project, wishes to be referred to collectively) of a tour date in Chicago with noise brethren Cock ESP. “All our electrical equipment was totally submerged, face-down … all the cords, everything!”

The LP debuted in tandem with a DVD of video art and a comic book depicting the band’s lyrics and mythology. Each black-and-white spread (some drawn with pen and ink, some multimedia collage) offers images of desolate wastelands careening off the page. The band stated that it scaled down the pages from drawings that were originally more than thirty inches wide, in order to emphasize the images’ depth. In one set of images, the band members are depicted destroying various technologies. The video footage — similarly high-contrast and colorless — assumes multiple, confused vantages. Aquatic settings dominate the frames. Citing the nuclear fallout resulting from the Fukushima Daiichi disaster in 2011, Styrofoam Sanchez commented, “It is part of our origins. [The band] evolved from the trash gyre in the Pacific.”

Lyrically, Styrofoam Sanchez subverts the meaningless buzzwords of contemporary, technophilic parlance and holds up a critical mirror to the conditions that enable it. Part of Styrofoam Sanchez’s intrigue lies in its use of a technological arsenal — video, sound, computers — as a way to attack tech-festishism. That ethos is embedded in the band’s vocals, which are often distorted beyond recognition. Excerpts from the comic, such as “IN MEMORY OF THE FUTURE STATE AGENCIES MONITORING WATER TYRANNY DIMENSIONAL AQUEDUCT,” mesh with similarly cryptic and aggressive sentiments to form a tableau of paranoia and obtuse critique.

Taken together, the album, comic, and videos form a unified aesthetic and political capsule. This cohesion differentiates Styrofoam Sanchez from other noise artists in the Bay Area. Identity obfuscation has long been a trope within the genre (usually employed to either destabilize the relationship between performer and spectator, or — as is particularly relevant to heavily processed, electronic sounds — to question the degree of human agency in performance), but Styrofoam Sanchez’s methods surpass these assumptions. At a time when corporations track individuals’ facial characteristics with increasing precision, the aesthetics of obscurity take on an even greater element of political resistance. The band uses Styrofoam to evoke an image of material antagonism. The group holds a mirror to corporatized society, whose locked cycle of hyper-production, consumption, and disposal impedes lasting cultural developments.

Observing Styrofoam Sanchez in the sparse expanse of the Michigan woods felt slightly surreal. Shadows stitched together and set the peripheral trees into grotesque relief. In contrast, Oakland’s urban geometries and gray-scale warehouse environs seem to absorb and complement the band’s strangely methodical aural terrorism. At the festival grounds, Styrofoam Sanchez’s goal — to embody the specter of our eventual demise as extruded polystyrene — seemed perversely resonant when removed from Oakland’s industrial environment. In a rural field, the Styrofoam headgear and noisy scree became more assaultive and threatening than ever.