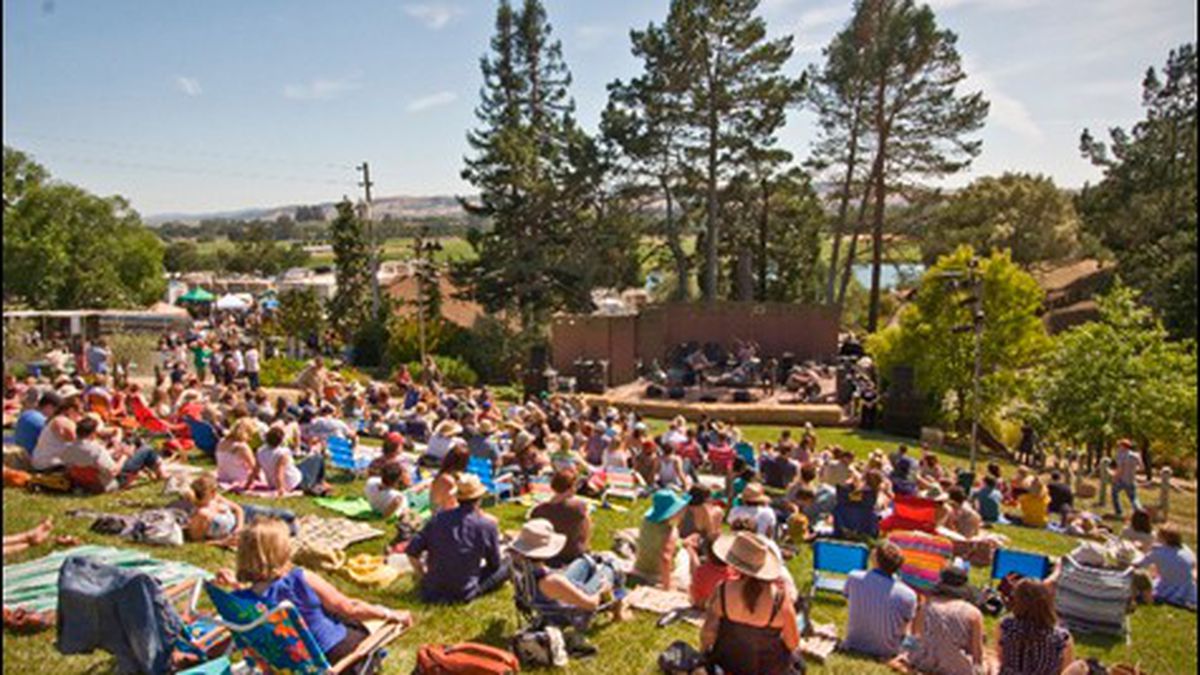 From Redwood Grove to BFD

Our staff recommends the best summer festivals in the Bay Area and beyond.

Sometimes we locals take for granted the fact that we live in such a picturesque area, but really, HAVE YOU NOTICED HOW BEAUTIFUL THIS PLACE IS? One place to soak it all in is the UC Botanical Garden (200 Centennial Dr., Berkeley), whose redwood grove — a small sliver of Muir Woods in the Berkeley Hills — is home to a tiny, two-hundred-seat, all-wooden amphitheater. Since 2010, the garden’s education program coordinator, Christine Manoux, has booked shows there, and in the last two years she’s booked a full summer lineup. Manoux said she’s still working on this season’s lineup, but confirmed acts so far include Quinn DeVeaux, Real Vocal String Quartet, Winfred E. Eye, Todd Sickafoose, Gaucho, and Ramon and Jessica. There’s no lighting, so concerts start early and end early, too, making them convenient for families. Bring a picnic and a blanket (it’s shady under those redwoods). — K.R.

Would you like some charcuterie and rosé with your boutique music festival? Then head to the Huichica Music Festival in Sonoma for a weekend of good food, good wine, and tasty bands. Presented by Jeff Bundschu, the Fruit Bats’ Eric D. Johnson, and (((FolkYeah!))), the small fest takes place on the sunny grounds of the Gundlach Bundschu Winery (2000 Denmark St., Sonoma), and will feature Blitzen Trapper, Fruit Bats, Jonathan Wilson, Cass McCombs, Damien Jurado, Jessica Pratt, The Donkeys, White Magic, Floating Action, Marty Marquis, Eric D. Johnson, and DJ Andy Cabic of Vetiver. The food and drinks promise to be equally appealing: Fine dining will be available from Portland’s Bunk Sandwiches and San Francisco’s Salumeria, Craftsman and Wolves, and Namu Gaji, among others; wine will come straight from the source. — K.R.

The awesome name alone should probably be enough to summon you to Mosswood Park Amphitheater (3612 Webster St., Oakland) over Fourth of July weekend for Burger Boogaloo, but even if not, the lineup will: Most of the festival’s acts are the kind that can reasonably be called legends, at least among a certain swath of reverb-obsessed, fuzz-loving punks and rockers (former Modern Lovers frontman and proto-punk pioneer Jonathan Richman; three-decade-old SoCal pop-punk juggernaut Red Kross; recently revived garage-punk group the Oblivians; all-girl surf-punk trio the Trashwomen) — and the ones that haven’t been around long enough (Ty Segall’s side project, Traditional Fools; up-and-coming LA garage-rockers Pangea) surely will be in due time. Also, and perhaps most importantly: At $40 for a two-day ticket, the Boogaloo is one of the cheaper musical thrills to be found this summer in the Bay. — E.C.

Thirteen years ago, when city staffer Samee Roberts conceived of Art & Soul, it was to correct a problem that now seems laughable: The City of Oakland was having trouble attracting people to downtown, and Oakland’s art scene was almost entirely eclipsed by San Francisco’s. These days, of course, downtown Oakland is a very different place, but Art & Soul still feels like the best encapsulation of the city’s beating heart, with a genre-spanning, something-for-everyone music lineup that manages to place punk, honky-tonk, Latin, and jazz on the same bill and a vibe that welcomes hipsters and hippies, kids and parents, dyed-in-the-wool Oaklanders and new transplants, plus the whole rest of the panoply of human existence that is Oakland. The lineup for this year’s festival — which, full disclosure, is being co-sponsored by the Express — hasn’t been finalized yet, but as of press time, confirmed artists include Lisa Loeb, Tristan Prettyman, The Rescues and Vintage Trouble, Amikaeyla, and Leela James; stay tuned for more. — E.C.

KMEL touts itself as “The People’s Station,” and this year’s Summer Jam lineup proves it still has its finger on the pulse of the hip-hop scene. Headliner Kendrick Lamar released one of the best rap albums of 2012, good kid, m.A.A.d city, which Express critic Lenika Cruz called “a cohesive, monumental series of portraits of Lamar’s coming-of-age on the streets of Compton.” When Lamar showed up at A$AP Rocky’s show at The Fox Theater in October, supplying the verses on “Fuckin’ Problems,” he mesmerized the crowd. Also on the bill is 2 Chainz, who recently delivered a high-energy set to a sold-out crowd at The Fox, proving why he catapulted from Internet buzz to Top 40 radio. Trinidad James, J. Cole, RaVaughn, and Wale round out the lineup. — W.P.

If you’ve noticed the kids rocking beanies and Doc Martens, and listening to the latest grunge/post-punk/alt-rock bands that are suddenly everywhere, perhaps you’ve realized the Nineties are back. So what better way to revel in the decade than by hitting up a festival that’s been going strong since 1994? Unlike some of the festivals that cater exclusively to big- name headliners, BFD has stayed true to its roots by keeping ticket prices relatively low and featuring a wide variety of old, new, and local artists. This year’s lineup includes Passion Pit, Thirty Seconds to Mars, Of Monsters and Men, Wavves, and Diplo, plus local favorites Justin Martin and J Phlip from Dirtybird, and Wallpaper. BFD is also one of the few large festivals that levels the playing field for local bands, with a spot reserved whichever artist wins and online contest (this year, it’s Curious Quail). — W.P.

Outside Lands might be the most loved and the most hated festival of the year. Yet from the accolades —an adventurous lineup of huge and small acts across genres — to the criticisms — being notoriously crowded, exhausting, and always a battle against the elements — the festival is still a can’t-miss affair, especially for those with enough foresight to pack numerous sweaters. While this year’s headliners — Paul McCartney, the Red Hot Chili Peppers, and Nine Inch Nails — can’t quite beat last year’s trifecta of Stevie Wonder, Metallica, and Skrillex, the smaller acts more than stand up to the challenge. Highlights include The National, Grizzly Bear, A-Trak, Youth Lagoon, Jessie Ware, Kurt Vile, and Chromatics. And, lest you’re still unconvinced, Hall & Oates will be there. — A.G.

In the words of Henry Miller, describing Big Sur in 1957: “This is the face of the earth as the Creator intended it to look.” Nearly a half century later, the Henry Miller Memorial Library (Highway 1, Big Sur) draws in thousands of travelers each year — and that’s not even counting its many film and concert events, the biggest of which is the annual Woodsist Festival. Though the event is much more intimate than your typical rager of a festival (no fifty-person porta potty line! Minimal to zero party bros!), the location and the expert curators — much-beloved production company (((FolkYeah!))) — ensure a solid experience. This year’s lineup includes Woods, White Fence, Jessica Pratt, Real Estate, The Fresh and Onlys, and Little Wings, among other garage and psych-rock favorites. Unfortunately, tickets have already sold out, but dedicated fans may have luck on Craigslist. — A.G.

Local jazz guitarist Alex Pinto and Laura Maguire, former music curator at cherished and daring SF venue Viracocha, are no strangers to pushing the limits of contemporary jazz. Their SF Offside Festival takes a local approach to the jazz circuit, celebrating homegrown heavy hitters — Mads Tolling, Howard Wiley and Marcus Shelby, and Dave Mihaly among them — and emerging talent such as Aram Shelton, Lisa Mezzacappa, and Pinto himself. While last year’s festival went down exclusively in San Francisco, two of this year’s three offerings will be in Oakland, at Awaken Café and Duende. Go to challenge your notions of jazz, or simply see what your own backyard has to offer. — A.G.

Can’t make it up to Washington state for Sasquatch! this Memorial Day? Those restless souls seeking a mini-festival vacation should head three hours north up to Hickey Fest in Leggett. Joining the trek north will be a host of Bay Area musicians, including Warm Soda, Sun Hop Fat, and Ash Reiter, along with other folk, blues, experimental, rock, and pop acts. What’s more, the magic will happen behind a ramshackle general store-type venue — what better way to take in the eclectic Ethiopian dance rhythms of Sun Hop Fat or the glistening pop-psychedelic charm of Ash Reiter — than nestled in an enclave of evergreens? — L.C. &#8;