.From Grape to Glass

How a few East Bay wineries and bar owners are changing the way we drink wine. 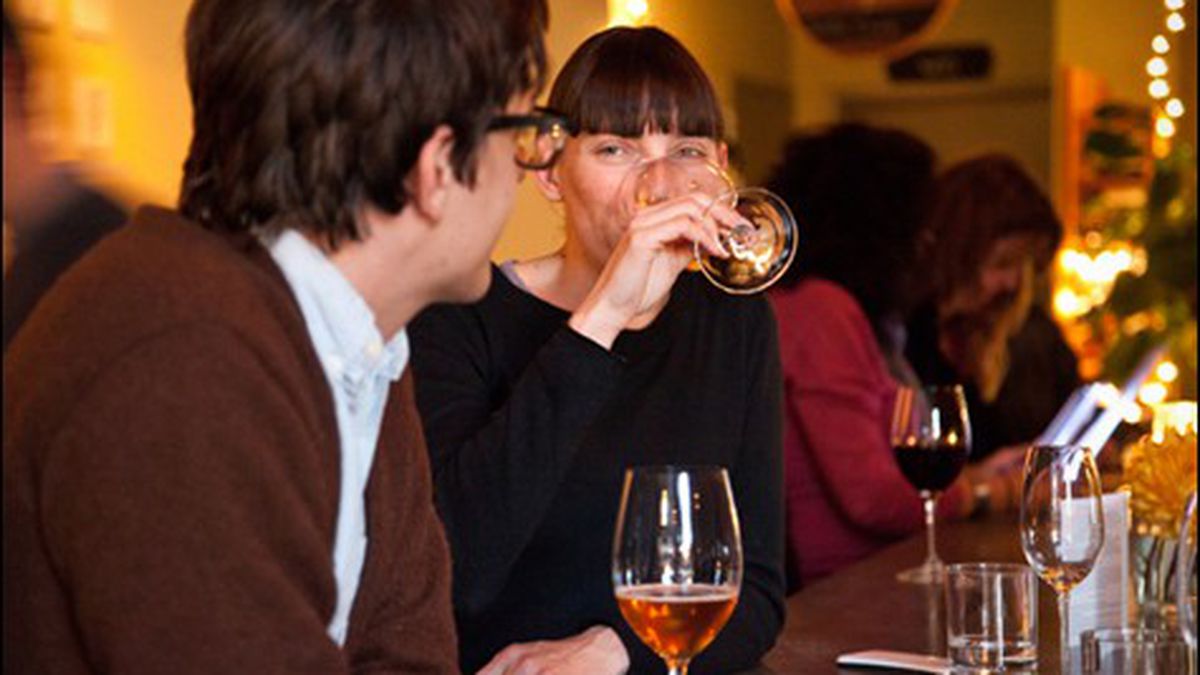 Terroir is a word tossed around somewhat liberally in the wine world. From the French “terre” — meaning “land” — it encompasses all the special characteristics bestowed upon grapes by the particular geography, geology, and climate in which they’re grown. “It’s really just all the things that give wine its sense of place,” said DC Looney, who co-owns Uptown wine bar The Punchdown with Lisa Costa. It’s a descriptor used so frequently it can sometimes seem empty of any meaning whatsoever; but The Punchdown’s wines, Looney earnestly insists, pay special reverence to the idea of terroir.

Like its San Francisco equivalent — named, you guessed it, Terroir — Looney and Costa’s wine bar subscribes to the belief that modern winemakers over-treat their grapes to make wines that are virtually indistinguishable from place to place, year to year. That’s why The Punchdown serves only wines they believe have seen “minimal intervention” — namely, none of the added yeasts, sulfur, sugar, acids, tannins, and coloring agents endemic in modern mechanized winemaking — and are made from grapes that have been grown organically. This is essentially what defines “natural” viticulture: letting the grapes simply do their thing, with no added heroics. Looney dubs wines that receive a stomach-churning amount of tinkering “Frankenwines,” while the bottom of their wine list at The Punchdown reads: “Thank you for your interest in real wine.”

This could come off as pedantic, but it doesn’t — it’s actually refreshingly unpretentious. On a recent evening, looking around The Punchdown’s tight but cozy space on Franklin Square, sandwiched between Ike’s Place and Plum, customers were decidedly varied in age, sex, and wine-knowledge. Looney frequently stopped at tables to answer questions about the wines on their list, some of which — like the beeswax-lined-amphora-fermented “orange wine” the couple just brought back from a trip to Georgia — qualify as definitively obscure. More than once I heard Looney answer questions about the wine-making processes he supports, and when I asked him a question about additives, he dashed away, returning enthusiastically bearing two different reference books on natural winemaking techniques. Even the menu reflects this laid-back ‘tude: two of the wine flights on the menu are called “Yes, it’s supposed to taste like that” and “I’m a broke-ass.”

Head over to Donkey and Goat Winery in Berkeley and you’ll hear similar enthusiasm about natural wines. Located in an old ink factory on Sixth Street, the urban winery features a tasting room whose walls are lined with framed photos documenting its wine-making process — from picking grapes in El Dorado and Anderson Valley to stomping the fruit by foot in big slatted vats to the actual fermenting, all done in wood-only vessels right in its Berkeley warehouse. Led by the husband-and-wife team of Jared and Tracey Brandt, Donkey and Goat has slowly become a major player in natural winemaking since its first harvest in 2003. “At the time, bigger was better in the way of California wines,” said Tracey. “Big fruit, big alcohol, big extraction. We never enjoyed that style, as we always preferred more nuanced wines of savory character that belong on the table and not the cocktail glass. Making wines naturally was a no-brainer to make the food-friendly, terroir-driven wines we preferred to drink.” Justin Falco, their tasting room manager, put it more bluntly: “Look, you can make a formula and make the same wine year after year, but you’re making wine — not ketchup.”

Donkey and Goat is joined by Chris Brockway’s Broc Cellars just around the corner, bumping up the East Bay’s total number of dedicated natural wineries up to two, although two other wineries — Dashe Cellars and Edmunds St. John — also use “natural” techniques. Yet even in one of the most food-conscientious cities in the United States, the natural wine movement has yet to be embraced anywhere near as universally as its edible homologue, the slow food movement. Both wineries sell under 4,000 cases of wine per year; to put this in perspective, Wine Business Monthly defines small wineries as those producing “less than 50,000 cases of wine per year.” Worldwide, natural wines still make up less than 1 percent of total industry sales.

Luckily, the natural wine industry in the Bay Area has gotten a huge helping hand from the slow food establishment. Looney, Brandt, and Brockway all praised enterprising chefs at places like Chez Panisse, Gather, Commis, and Plum, who have embraced newer natural wines, which often pair nicely with food because of their subtlety and lower alcohol content. “People are experimenting more with food here, so they’re also beginning to experiment more with wine lists, too,” said Brockway, a Nebraska native. “If you go to Nebraska, people aren’t that into it. There the wine’s just gotta taste good.”

This emphasis on wine not necessarily just having “to taste good” has gotten some flak from critics who disapprove of the occasionally funky products (a New York Times critic recently described some natural wines he’d tried as tasting like “microbiological swamps”). But this problem exists across the board in viticulture — natural winemaking just requires more due diligence and, really, more hygiene. Regardless, natural wine diehards, like Looney, embrace the occasional funkiness. “We want the wines we carry to taste different every year, to show what happened on the vine that year, even if that means it’s going to be a little funky sometimes,” he said. To Looney, that’s the epitome of terroir.

Editor’s Note: The original version of this story contained three errors. First, we erroneously said that DC Looney and Lisa Costa are married. Secondly, we misspelled Chris Brockway’s last name. Finally, we neglected to mention that Dashe Cellars in Oakland and Edmunds St. John in Berkeley also make natural wines. This version has been corrected.