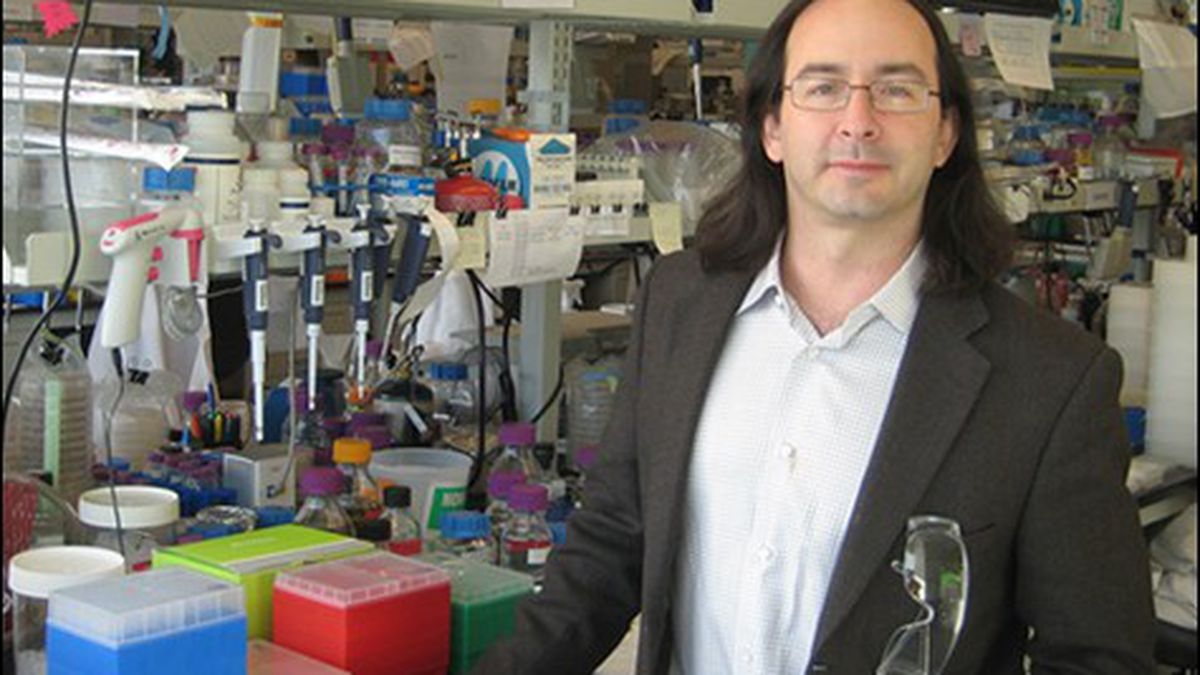 From Disease to Green

Emeryville-based Amyris is using its expertise in fighting malaria to develop a molecule that turns sugarcane into biofuel.

The Nissan Leaf and Chevy Volt promise to help quench America’s growing thirst for electric vehicles. Yet no matter how popular they become, electric cars will leave a big piece of the petroleum puzzle unsolved: trucks, buses, and aircraft, whose power demands cannot be met by current electric-motor technology. Leading the search for a solution is Emeryville company Amyris, which is developing a full line of diesel, jet, and gasoline biofuels that it says will perform at least as well as petroleum-based alternatives. The company plans to begin selling its first product, a biodiesel, by 2012. If it succeeds, it’ll be the first company to bring a patented renewable fuel to market.

Some 250 employees bustle about the company’s ultra-modern 88,000-square-foot lab and office space at 5885 Hollis Street, working to make sure that happens. An excited, convivial atmosphere in the building only contributes to the rosy outlook for a company that went public in September, received a $25 million grant from the US Department of Energy to study domestic biofuels in late 2009, and has a major stakeholder in Paris-based Total, one of the world’s largest oil and gas companies.

That’s an enviable place for any business to be, made all the more impressive by Amyris’ unlikely beginnings seven years ago. Three bright, idealistic postdocs who met through UC Berkeley came together with the general plan to use synthetic biology to make a difference. And in late 2004, when Berkeley Espresso still served as the company’s de facto headquarters, a surprise $42.6 million, five-year grant from the Bill and Melinda Gates Foundation allowed them to do just that. Charged with developing the technology for a reliable and low-cost anti-malarial drug, they ended up with a 95-percent-effective treatment that costs less than $1 per treatment. It should be widely available in Africa by 2012.

The step from there to biofuels was more natural than it may appear. Amyris’ work on artemisinin, the anti-malarial drug, left it with a scientific platform that could be applied to any number of chemical challenges. The company’s ethos of using synthetic biology to develop high-impact solutions to worldwide problems, meanwhile, remained intact. And the founders’ individual interests tipped the scales even further toward renewable fuels. “All of us had had this environmental bent,” said Jack Newman, co-founder and senior vice-president of research. “Curing malaria, that’s impactful. So what are we going to do next?”

Newman’s background, in particular, was firmly rooted in environmentalism. The reason he’d decided to study microbiology in the first place, he said, was to learn how to use biological systems to do good for the Earth. Before that, he’d worked with the California League of Conservation Voters, the Sierra Club, and EarthFirst, including multiple stints as a redwood-tree-sitter. “I was super into the environmental movement, and wanted to figure out how biology as a science could form the basis of a technology that could make a difference in the world,” he said. “I spent time knocking on doors, asking people for money for good causes. I spent time sitting in a tree to keep the tree from getting cut down. But as soon as I got out of that tree, that tree was toast. And I couldn’t spend my life there. If you really want to have an impact in the world, you have to find some way to make whatever it is you’re doing sustainable.”

Newman ended up earning a postdoctoral degree in microbiology from the University of Wisconsin at Madison, where he worked in a lab run by Jay Kiesling, UC Berkeley professor of chemical and bimolecular engineering and fellow Amyris co-founder. Eventually, the brain trust in Kiesling’s lab identified a goal of “build[ing] microbes that would use renewable feedstocks to do everything that petroleum can do.” It was out of this impulse that Amyris was born. The Gates grant and malaria program provided the company the jolt it needed to get off the ground.

Amyris’ breakthrough in the biofuels arena was developing a molecule called farnesene, a petroleum alternative that can be turned into diesel as well as surfactant, cream, emollients, lubricants, and other chemicals. It’s created by replacing the yeast that would normally turn a feedstock such as corn into ethanol with a genetically modified yeast that produces farnesene. As a fuel, farnesene offers a number of advantages over ethanol. The latter can only be blended with petroleum fuels up to 15 percent — versus Amyris’ Environmental Protection Agency-approved 35 percent — and is not appropriate for use in trucks or airplanes.

The company also distinguishes itself by using sugarcane as a feedstock rather than corn, which has been a highly subsidized yet so far unsuccessful biofuel crop in the United States. Amyris’ production plant will be located in Brazil, where it has access to significant amounts of sugarcane optimized as a fuel, not a food; energy cane, as it’s known in the industry, can provide up to five times as many bushels per acre as corn. It’s also cheaper and requires less water.

Branded “No Compromise” because it’s designed to match or beat petroleum in cost and efficiency while offering a lower carbon footprint, Amyris’ fuel has functioned well in early testing — including one stage where it ran an Emery-Go-Round commuter bus. Some engine manufacturers, Newman said, have reported that the fuel makes petroleum run better than it does pure.

“I think they have started with the right goals, and if they can do it from sources like energy cane and create biodiesel and biojet fuel than can be blended right at the refinery, that would be very beneficial,” said renewable fuels expert John Addison, who runs the web site Clean Fleet Report. The major challenges facing the company, he suggested, are cost and scale: namely, competing with petroleum even while producing potentially tens of hundreds of millions of gallons a year.

Only time will tell how Amyris’ technology shakes out in the real world. Yet Newman is confident, and characteristically optimistic about its projected impacts: “Anything that you can get out of a barrel of petroleum you should be able to get from a renewable feedstock.”