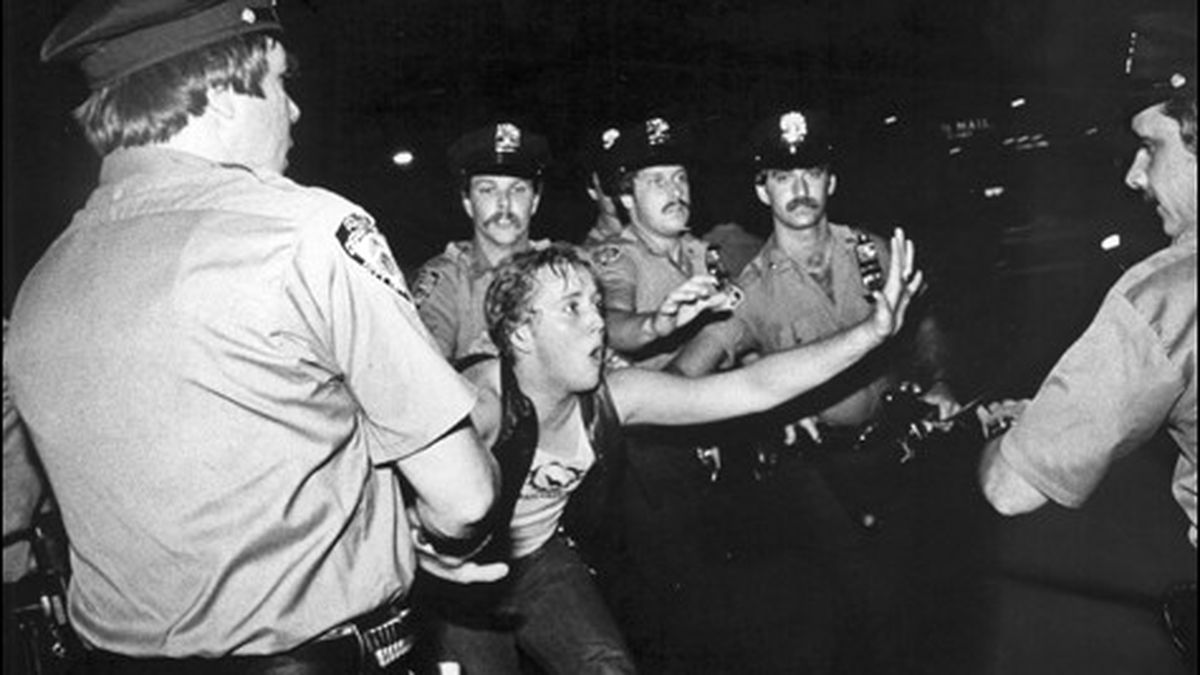 Frameline34 Goes Back to the Future

Those who don't learn from history are condemned to repeat it at this year's festival.

Maybe it’s the tough economic times, maybe it’s a natural pause in the arc of popular culture from the lesbian-gay-transgender-bisexual perspective — or maybe it’s just luck of the draw. Frameline34, the 34th edition of San Francisco’s perennially popular LGBT film festival, seems to be casting its gaze significantly backward lately, as if consciously trying to absorb a few lessons of the past before moving on.

Andy Warhol and his superstars, Beat-Era literary lions Allen Ginsberg and William S. Burroughs, the Stonewall Riots, gay New York in the Seventies and Eighties, the life and times of a bisexual Spanish modernist poet, and even the vicissitudes of one of English history’s first openly lesbian women: They all pass in review beginning on opening night, Thursday, June 17, San Francisco’s Castro Theatre. But before we climb into the time machine, let’s take a look at a couple of here-and-now films, neither of which enjoys the luxury of hindsight.

Ask any experienced festival-goer: In general, French-language films are worth seeking out — you don’t have to know anything else about them. Hideaway by veteran French helmer François Ozon and I Killed My Mother by Canadian phenom Xavier Dolan are two of the best things in the festival, a pair of stories about unhappy, difficult people.

Hideaway (French title: Le Refuge), the portrait of a Parisian heroin addict named Mousse (played with maximum intensity by Isabelle Carré) recovering from the OD death of her lover, becomes still more complicated when Mousse learns she’s pregnant with the dead man’s baby. Wishing to cover up the scandal, the lover’s rich mother reluctantly sends her self-absorbed would-be daughter-in-law to the family’s seaside country house, where Mousse relates to her lover’s gay brother, Paul (pop singer Louis-Ronan Choisy), and begins to develop what could only be called a conscience. Will Mousse return to her druggy ways? Will she keep the child? Find out June 25 at the Castro.

Hideaway is quiet and warm as the womb next to I Killed My Mother (J’ai tué ma mère), a mother-and-son battle royale set in Montreal. Sixteen-year-old gay student Hubert (Dolan), who looks like a cross between French Symbolist poet Arthur Rimbaud and a young Matthew Broderick, hates his mother, and his mother Chantale (Anne Dorval) hates him, but they really love each other, too. It’s a classic dysfunctional family brawl, nonstop bickering escalating to punches. It’s also an actor’s and writer’s picnic, which plays nicely into the hand of former child actor Dolan, who wrote, art-directed, produced, starred in, and directed I Killed My Mother. The dialogue is of the scathing variety. See it June 19 at the Castro.

But enough of these modern problems. Let’s take a trip back to Regency England, where landed heiress and closet lesbian Anne Lister is wrestling with, or shall we say pussyfooting around, the issue of her sexual identity. Ginger-haired Anne (actor Maxine Peake) would have no trouble fitting into modern-day Berkeley, but in the West Riding of Yorkshire, where the gentlemen raise sheep and start up coal-mining companies and the ladies are expected to tend their rose gardens and compose verse, headstrong “gender pioneer” Miss Lister — a real-life figure from whose journals the screenplay is adapted — has trouble playing her role. So she manages to settle for all of the above: sheep, coal mines, gardens, and poetry. Even though she prefers the company of women and is thus subjected to disapproving looks from her social circle, Anne carves out quite a respectable business career for herself, all the while fending off boorish men who are trying to marry her for her money.

That’s the advantage of being rich. Instead of working in a mine or serving as a maid, Anne has plenty time to throw herself onto the furniture and scrawl her true thoughts, principally her love for one Mariana Belcombe (Anna Madeley), in her diary. There’s a lesson here for all of us: If you’re going to be a rebel, try your best to be a propertied rebel. Anne pines for the full ninety minutes. It’s a pity. The full Coffee-Table-Film experience, yours for $35. The Secret Diaries of Miss Anne Lister, directed by James Kent, opens Frameline34 on June 17 at the Castro.

Sigfrid Monleón‘s The Consul of Sodom, the story of another historical rules-flouter, illustrates a further lesson in gender politics: It’s easier to get away with things if you’re a man. Businessman, poet, sybarite, and bisexual Jaime Gil de Biedma (played with a lusty leer by Catalan actor Jordi Mollà) led a picturesque life in the fast lane of Franco-era Spanish society, circa 1950s-1980s. From sex shows in the slums of Manila to “la dulce vida” swinging-Sixties orgies back home in Barcelona, Jaime did whatever he wanted and used his peccadilloes as raw material for what he called the “poetry of experience.”

His stuffy industrialist family was scandalized, fascist officials made threatening gestures, and the communist party — he was a certified leftist intellectual — blackballed him for his antics, but in the end there was nothing to be done because of the Gil de Biedma family business connections. Playboy/executive Jaime, as strong in the boardroom as on the nightclub circuit, is fond of quoting El Caudillo Francisco Franco’s edict “Leave the rich alone.” The life of this charming but vain, hedonistic yet melancholy 20th-century cultural figure gets a rich literary treatment by director Monleón, with Gil de Biedma’s poems arrayed over lush visuals shot on location in Spain and the Philippines. See it at the Castro, June 20.

The Frameline34 Way-Back Machine gets stuck on New York in the Sixties. And why not? It was a turbulent, exciting time and place, as three of the festival’s most vibrant documentaries suggest. The can’t-miss item is Stonewall Uprising, Kate Davis and David Heilbroner‘s deep-background account of the “queer riot” outside a West Village men’s bar that effectively kick-started the US gay liberation movement. The film explains that 1969 was “the Dark Ages of homosexuality” — shock treatment, lobotomies, castration, etc. — and that gay people who were not wealthy and connected (à la Truman Capote and Gore Vidal) lacked the political clout to prevent persecution. All that began to break apart when the patrons of the Stonewall Inn on Christopher Street fought back against a raid by NYPD officers one hot July night. As one man remembers, “America thought we were these homosexual monsters, and we were so innocent, and oddly enough so American.” Stonewall Uprising screens June 24 at San Francisco’s Roxie Theater.

German director Rosa von Praunheim has made several films in Manhattan’s gay neighborhoods, so it’s not surprising that he has a few New York Memories. His documentary, one of the fest’s best, revisits a succession of Europe-to-America transplants from such earlier pics as Survival in New York, and comes to some bedraggled conclusions. Most of them are “overcome with New York fatigue” because Manhattan is increasingly “an island for rich people” — but they all love the place, even if it represents a decadent culture on the verge of collapse. The Pohl sisters, Lucie and Marie, are especially lively. The transgendered street kids in Susi Graf‘s Lost in the Crowd are not so lucky. Rejected by their families, victims of homophobia, they’re looking for love and acceptance, as the operators of the Neutral Zone care center testify. New York Memories plays at the Roxie, June 21; Lost in the Crowd is at the Victoria Theater in San Francisco, June 26.

Litterati and fans of vintage grotesquerie won’t want to miss William S. Burroughs: A Man Within, Yony Leyser‘s documentary tribute to the late author of Naked Lunch, an eccentric’s eccentric. Such celebrated Burroughs admirers as Gus Van Sant, Iggy Pop, the late Allen Ginsberg, Amiri Baraka, David Cronenberg, and actor Peter Weller line up to sing his praises, and there’s a trove of rare footage of Burroughs enjoying two of his favorite pastimes: drugs and weapons. It shows at Berkeley’s Rialto Cinemas Elmwood on June 22.

While we’re on the Lower East Side, we might as well drop in on pre-op tranny and Andy Warhol superstar Candy Darling, who died in 1974 as a result of female hormone treatments. Talking heads point out that Candy, contrary to being a drag queen, was in fact a transsexual who wanted to be a movie goddess. And she nearly made it. Unfortunately, Candy was “junked by [Warhol’s] Factory” — he was tired of “chicks with dicks.” Fellow Warhol-ite Taylor Mead sized up Candy’s predicament succinctly: “Too gentle. Too gentle for the bullies.” Beautiful Darling, directed by James Rasin, with the voices of Chloë Sevigny and Patton Oswalt, screens June 23 at the Castro.

Other films of note: Javier Fuentes-León‘s gay-male drama Undertow (Contracorriente) from Peru; the Brazilian comedy Elvis & Madona by Marcelo Laffitte, a sort of lowbrow Almodóvar riff; My Normal by Irving Schwartz, a comic story of dominatrixes in New York; and Roberto Moreira‘s Paulista, a fable of stylish singles cruising for love in São Paulo, Brazil. For up-to-date info, go to Frameline.org.