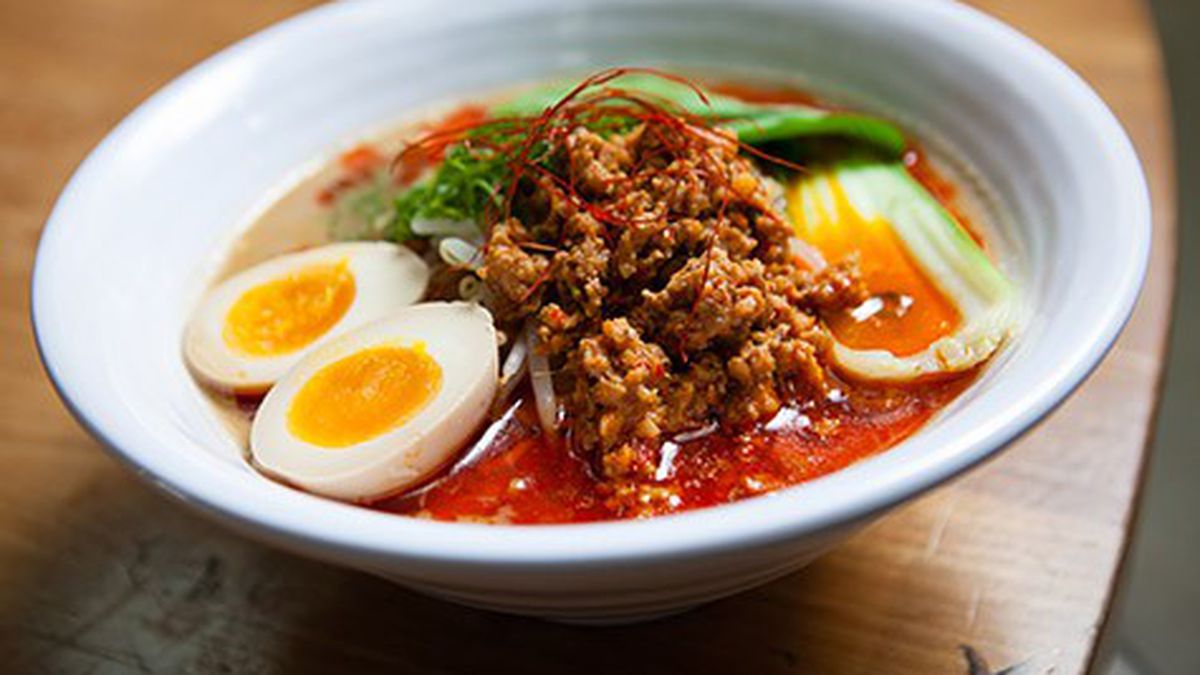 America’s complicated relationship with Japanese food somehow dictates that the only way to do it justice is to make it extra fancy and expensive. The Bay Area is home to some of the tastiest sushi, ramen, and izakaya-style fare in the United States. You just wouldn’t ever mistake most of it for everyday Japanese cuisine.

Leave it to a couple of industry outsiders, then, to break that mold, at least in the increasingly hip world of ramen. Jake Freed and Hiroko Nakamura, two former chemists with a love of noodles, wondered why the Bay Area didn’t have ramen shops like the ones in Japan — where, at even the most highly regarded places, the prices tend to be low; the service, blindingly fast; and the setting, usually little more than a bar counter.

That’s the approach the fledgling restaurateurs have brought to Shiba Ramen, their two-month-old ramen shop in the newly renovated Emeryville Public Market. The goal was to serve ramen that’s as good — or at least nearly as good — as what you can find at a thousand different noodle shops in Japanese cities such as Tokyo or Sapporo. And they wanted to serve it quickly, with little fuss, and at a reasonable price point.

That’s the theory, anyway. What Nakamura and Freed might not have anticipated is just how popular their little food court stall would become. During one visit at the peak of the lunch rush, the line snaked toward the food court’s rear entrance — a solid fifteen-minute wait just to place my order, exacerbated by the fact that there was only one copy of a paper menu with descriptions of the different ramen varieties. (The main menu board only lists dishes’ names, which tend to be enigmatically minimalistic: “White Bird” or “Soy Milk.”)

Freed and Nakamura acknowledged that Shiba Ramen has faced its fair share of growing pains — unforgiving Yelp reviews, the difficulty of finding and retaining skilled line cooks, and so forth. All this was on top of the fact that the owners are total newcomers to the food business. Apart from a ten-day stint at a “ramen school” in Japan, Nakamura, the chef, is entirely self-taught.

And so there’s been a bit of a learning curve. During my first visit, on a chilly evening about a month after the restaurant opened, each bowl of ramen came out barely warm (the result of some faulty kitchen equipment, Nakamura later told me in a phone interview), and the pork gyoza, while tasty enough, lacked the crisp bottoms that are the hallmark of proper pan-fried dumplings.

But even during these somewhat shaky early days, Shiba Ramen more or less delivered on what it promised. No matter how long I had to wait in line, my ramen was always ready before I had a chance to warm up the counter stool — usually within five minutes after I put in my order. More importantly, the ramen itself was on par with what I might expect to find at a nice sit-down ramen restaurant. If you’ve ever used the term “food court fare” as a slur — well, this isn’t that.

So far Nakamura has about eight different ramen recipes in her repertoire, with three to five typically listed on the menu at a time. The first one I tried was the one that surprised me the most — a vegetarian ramen with a soy milk-based broth that was topped with bamboo shoots, thick slices of kabocha squash, and halves of a soft-boiled egg (which vegans can omit). The noodles, sourced from Honolulu-based Sun Noodle, had that springy bounce to them that I look for in a bowl of ramen. (These are the same noodles that virtually every well-regarded ramen-ya in the South Bay uses.) But the standout was the soup itself: The soy milk, mixed into the broth at the very end, contributed a creaminess and a luxurious mouthfeel, and a drizzle of garlic-infused oil added yet another layer of richness. I liked this better than just about any other vegetarian ramen broth I can recall eating — better, even, than Ramen Shop’s much-vaunted Meyer lemon shoyu broth.

If richness is the main thing you look for in a bowl of ramen, look no further than the White Bird, a chicken-based tonkotsu ramen whose broth was so thick and viscous, it resembled a cream sauce more than it did a soup — the result of simmering what comes out to about a half-pound of chicken bones per serving, Nakamura explained. I found the soup reasonably tasty, but too heavy for me to want to eat the entire bowl — especially since the pork chashu (a slice of fatty pork shoulder) lacked the hint of sweetness that it often has at other ramen shops. The result was that both the White Bird and the “Clear” ramen (with its comparatively light, salt-based shio broth) were a little too one-dimensional — no element of sweetness or acidity to balance out all that savory richness.

My favorite dish at Shiba was the “Spicy,” a version of the tantanmen ramen style. A mass of noodles came in a thick, porky, red-tinged gravy and was topped with ground pork cooked in (only slightly) spicy fermented miso — basically more of a meat sauce than a broth, but not heavy enough to keep me from slurping down the entire bowl in a minute.

Heartier eaters might long for the ability to pay a few more dollars to upsize Shiba Ramen’s relatively modest-sized bowls, but with most bowls running $11–$12, tip-inclusive, the ramen is a good value. Anyway, it’s worth your while to add an appetizer or two to your order. The sesame seed-flecked fried chicken wings, tossed in a heady mixture of soy sauce, garlic, and ginger, were a standout. Cool strips of spicy cucumber, reminiscent of a milder version of a dish you might find at a Sichuan eatery, were another.

And those with a sweet tooth won’t want to skip the Shiba Scream, the restaurant’s version of an ice cream sandwich, but with custom-made Fentons Creamery flavors (dark chocolate and green tea for now) and adorable Shiba-branded monaka shells imported from Japan — basically, thin wafers made with mochi flour.

You can enjoy all of this in the recently renovated and, for now, sparsely populated wing of the Emeryville Public Market food court — on your office lunch break, perhaps, or to reward yourself after a trip to the dentist’s office in the complex. That’s the real breakthrough of Shiba Ramen: It’s not necessarily serving the best ramen you’ve ever had in your life, but this ramen is pretty darn good for the setting. In Asia’s major metropolises, it’s an everyday occurrence to find food of this quality in a food court, but here in the United States, this still feels like a revolutionary stroke. And that’s the blunt truth of the matter: If every mall in America had a ramen stall as good as Shiba Ramen, we wouldn’t have to talk about bad food court food ever again.