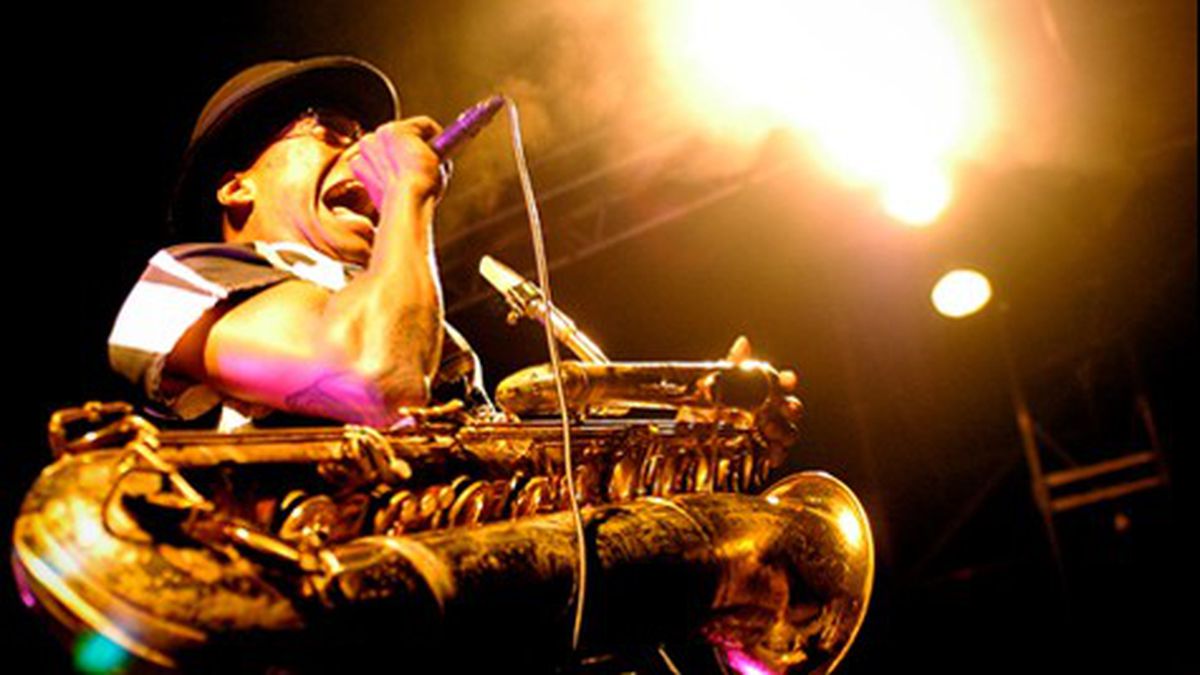 Fishbone Out of Water

The band's longevity owes as much to individual pluck as to changes in pop culture.

Last Friday Fishbone frontman Angelo Moore sat at a restaurant in Miami, eating fish and rice and flirting with the waitress. “Thank you so much, that’s beautiful — and so are you,” he said, making no effort to mask his conversation from the reporter listening on the other end of his cellphone. The waitress giggled. Moore invited her to a show that night — his band was playing the Virginia Key Grassroots Festival, wedged right after Chaka Khan on a bill that also included political rapper Immortal Technique, conscious hip-hop group Arrested Development, Latin “urban orchestra” Locos por Juana, and a slew of other worldish music acts. At that moment, the name of the festival eluded Moore. He was just happy to be playing.

The fact that Fishbone has existed for this long is nothing short of amazing, given the band’s rags-to-riches-to-rags storyline. Many outsiders attribute all of Fishbone’s success and failures to race, given that it was one of the only all-African-American rock bands to have a tangible mainstream presence in the Eighties. Gerrymandering was more rigidly enforced back then, and genres were largely delineated by race. It was unheard of for a group of black guys to emerge from South Central Los Angeles with a style that more closely resembled “white” punk rock than the “urban” music they were supposed to produce. At its inception, Fishbone bedeviled everyone. It seemed the band was either poised to be a torchbearer, or doomed to fail. Either way, it would serve as a barometer for race tolerance in the music industry.

Talk to Moore, and he’ll throw the race theme around a lot — he’s currently working on a comic in which his alter ego, Dr. Mad Vibe, goes on an expedition and ultimately finds himself trapped in “The Land of Caucasia.” But dig a little deeper, and you’ll find that the story of Fishbone is both a race allegory and a tale of two remarkably obstinate human beings — Moore and bassist John Norwood Fisher — who seldom yielded to societal expectations. At least, that’s what San Francisco-based filmmaker Chris Metzler discovered when he set out to make the documentary Everyday Sunshine: The Story of Fishbone, which screens at Oakland City Hall this Friday in anticipation of its PBS broadcast on Sunday night.

“I was expecting for this film to be more about race than it actually was,” Metzler confessed, adding that he and co-producer Lev Anderson had been attracted to the band as much for what it symbolized as for its sound. “When you dig a little deeper, you realize yeah, race played a role. But there were so many different factors. Nobody’s guaranteeing you commercial success.”

In fact, the story of Fishbone is largely about a sequence of serendipitous events. It began with a desegregation busing program that was implemented in Los Angeles during the 1970s and ’80s, following the outlaw of racial segregation in public schools. Inner-city kids like Fisher and his brother, Philip “Fish” Fisher, were bussed to white schools in the suburbs, with the idea of forcing people to integrate. Moore was an exception to the rule because he already lived in the suburbs — or, as he put it, “the land of Mighty Whitey, honey; I’m the fly right in the middle of the buttermilk.”

Like many raced-based legislative decisions, the busing program worked, sort of, though not necessarily in the way everyone expected. In this instance, you had six black guys who quickly became the most popular kids at school (that’s how it seems in the film, at least, particularly when Fisher brags about how he had his own fan club) but who also poached the tastes of their white peers and brought them back to the ‘hood. The members of Fishbone launched their band at Fisher’s apartment in South Central, sometimes practicing from the time they got home from school until 8 o’clock at night.

The band was a genuinely bizarre hodgepodge: saxophone, piano, trombone, trumpet, guitar, bass, and drums, all held together by Moore’s rock-star stage antics. Their music combined influences from punk rock, blues, and ska in a way that would perplex most listeners — including Fisher’s mother, affectionately known as Mama Fish. On a technical level, though, it surpassed what most other artists were doing. When producer David Kahne signed the group to Columbia Records in 1985, it was because of their artistry, not their mystique. Kahne had no idea how to package the band within a racially segregated market, where even a more benign group like The Beastie Boys seemed like a dicey proposition. He just knew Fishbone was good.

Thus began the story of a band that was always right on the brink of real fortune, even though it never quite panned out — a cursory glance at Fishbone’s history shows that the band really foundered on the marketplace, since none of its albums ever went gold. There’s a whole litany of explanation for this: that Sony (which acquired Columbia in 1988) didn’t know how to market to a subculture; that playing against type is particularly hard in the music business; that personal meltdowns, like that of guitarist Kendall Jones, hastened the band’s decline.

All of those things were true. But Fishbone never quite dissolved; if anything, it became more iconic, which is why Metzler and Anderson had an easy time persuading A-list stars like Gwen Stefani, Flea, ?uestlove, Ice-T, Branford Marsalis, and Laurence Fishburne to all take part in the documentary. (Fishburne narrates the animated sequence at the beginning of the film, tracing Fishbone’s rise to fame.) The band’s legacy seems particularly pronounced in places like Oakland, where racial diversity has generated a uniquely hybrid pop culture. Whereas “Afro-punk” might seem tawdry in other parts of the world, here it’s not only accepted, but embraced.

Which is why is seems appropriate that a documentary celebrating the world’s foremost Afro-punk group (no disrespect to Bad Brains or Living Colour) would come to Oakland City Hall in honor of Black History Month. Fishbone still performs here frequently, at places like Shattuck Down Low and The Independent in San Francisco, where the band will return in March. In the meantime, they’re living modestly — Fisher in a rent-controlled one-bedroom apartment by Venice Beach; Moore at his mother’s house. (He said he’s in the process of moving to an artists’ complex.) Asked how they make it work after all these years, Fisher said, “I’m still surprised.”

No, Top Hatters Kitchen Isn’t Having an Identity Crisis

They Aren’t from France