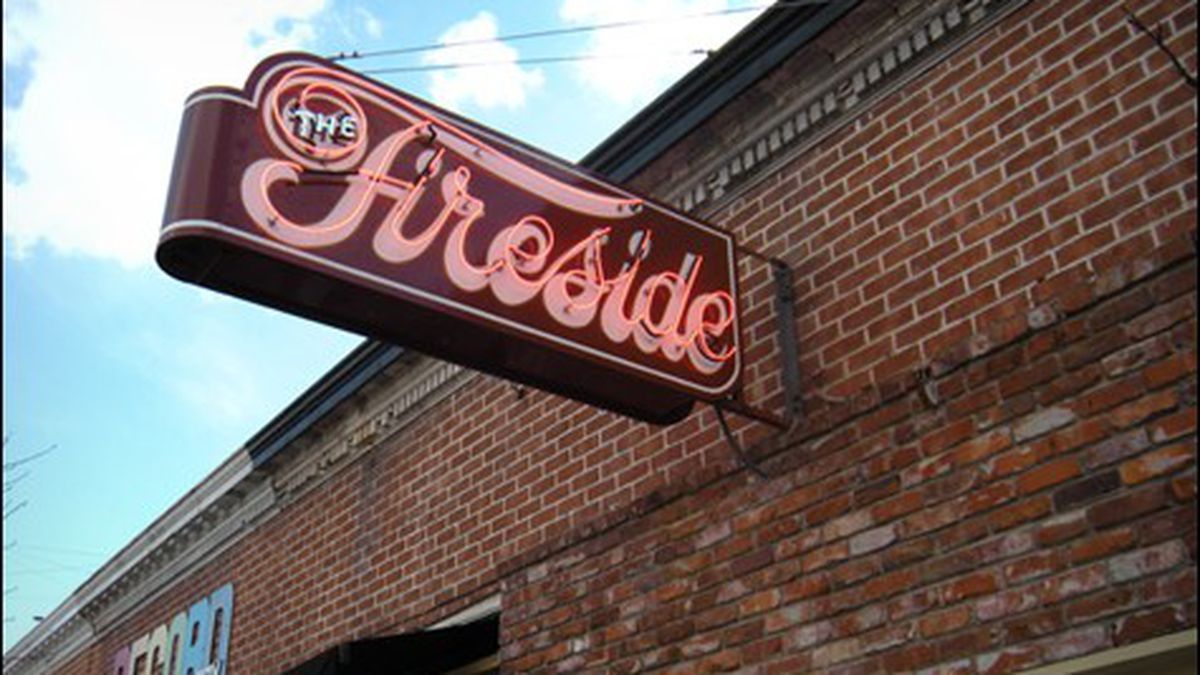 There is an actual fireplace — angular, ivory-colored, and somehow regal-looking, appropriately be-sooted, kind of the perfect thing for an overcast and freezing March evening. It’s been there since 1942, apparently, though for a significant chunk of that time it was hidden amidst/behind all manner of Raiders memorabilia, so many thanks to whoever set it free.

What with the fireplace, Fireside’s aesthetic is planted firmly between that of a nice-ish restaurant (upholstered, straight-backed chairs; high, varnished tables; filament-y light fixtures) and a mountain lodge (pool table, bookcase full of board games, Some Like It Hot on the TV, framed vintage liquor and cigarette ads), and as such, it is pleasant in that quiet, common kind of way — not a destination bar, co-owner Keely Rogers-Free admits, largely because of its location on Alameda’s relatively isolated West Side, but also not really trying to be. It seems that she and fellow owners Bitsy Eddy and Sandy Russell are perfectly content to do what they can do well — that is, capably made, consciously sourced cocktails in a comfortable setting that Rogers-Free says tends to cater to thirty-and fortysomething locals and industry types. Fireside is neither fancy-chic nor hipster-divey; it just is. It’s nice.

Drinks-wise, Fireside does the fresh herbs-house squeezed juice-craft beer thing, but it also makes a special point of emphasizing US distilleries — “There’s so much good distilling happening in this country that I can usually find something that’s made as well or better domestically,” Eddy explained; the bar’s signature cocktail list is entirely composed of concoctions made with spirits from nearby St. George’s.

At this point and this area, it’s not all that uncommon to eschew corporate beer, but Fireside doesn’t even carry most mass-produced liquors. It’s an undeniably high-minded and ambitious philosophy, this weaning-people-off-the-bad-stuff-by-sheer-force, but if anyone can make it work it’s this place.

On Sunday, for example, when a customer asked for a Stoli and was a little surprised to hear Fireside didn’t carry it, Eddy — with a sweet unassuming-ness that belies the fact the she knows way, way more about liquor than you — managed to not only assuage any confusion but talk him into a sugarcane vodka from Hawaii, certainly something he would never have tried otherwise (he let me taste it; it was delicious).

I tried a Sage Smash (lime juice, St. George’s Hangar One kaffir lime, vodka, sugar, sage, $9): a little blunt, but nonetheless well-intentioned, and even better next to the fire.