As the culmination to her six-month residency at Mills College, the sound installation artist invites the viewer to take part in her work in A+P+I. 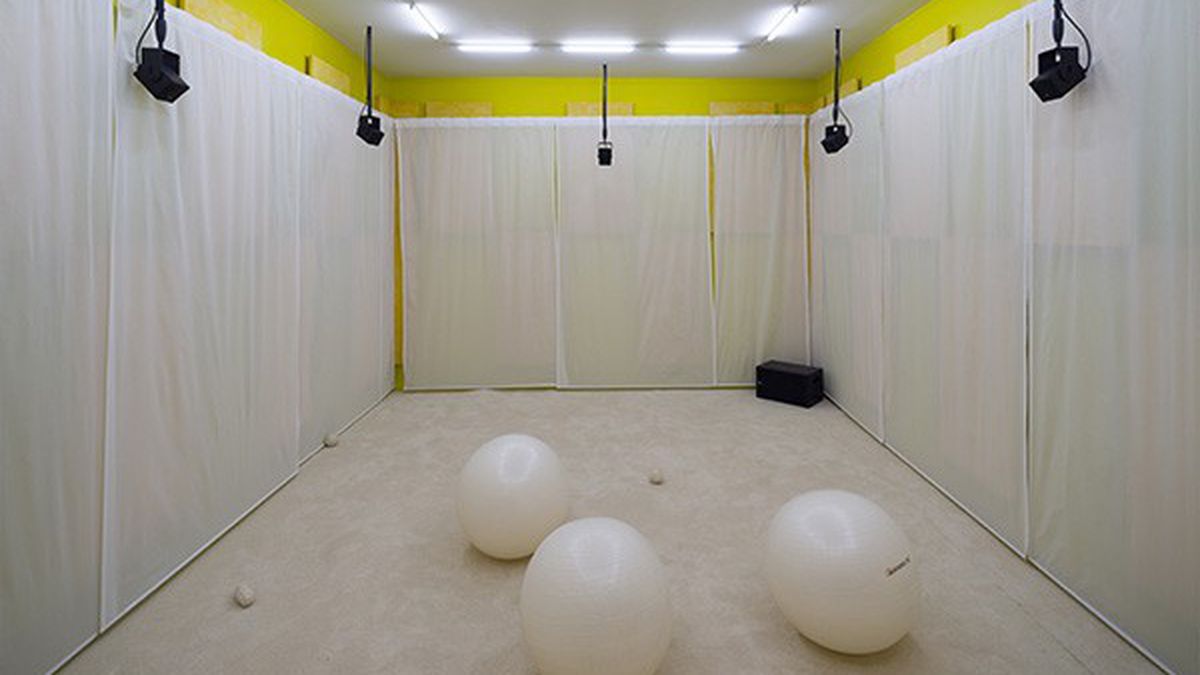 There’s a sweet spot at the center of Jacqueline Kiyomi Gordon’s womb-like installation in the A+P+I (Art+Process+Ideas) show at the Mills College Art Museum (5000 MacArthur Blvd., Oakland). Aptly titled A Centering, the immersive art piece takes the form of a softly lit room hidden behind a pink velvet curtain. Inside, beige carpet covers the floor, and thin curtains transparently obscure layers of soundproofing lining the walls. Hanging Meyer Sound speakers placed around the perimeter play an ambient recording that fills the space, at times evoking the coarse hollowness of wind whipping by an open car window or the drone of an airplane engine from far away. (In fact, it’s amplified clips of Gordon moving around an empty lecture hall recorded with “ambisonic” technology designed to capture the sonic experience of a three-dimensional space.) For the recording to most effectively evoke spacialization, listeners should stand in the center of the room and let the sound waves hit them equidistantly from every direction. But the average person venturing inside the velvet curtain wouldn’t know that.

That visitor is more likely to explore the spectrum of sound quality inside the room by investigating the space, potentially finding that sweet spot determined by the technology and its accompanying standards, but more likely missing it — experiencing all of the “wrong” ways of listening. To complicate that experience further, Gordon added in white exercise and massage balls. As a tool intended to help people “center” themselves physically and energetically, the exercise balls play off the notion of finding that prescribed sweet spot, tying together the physical and cognitive aspects of listening. Ideally, someone attempting to both listen to the recording and balance on a ball would ask himself or herself, ‘”How much am I listening externally and how much am I listening internally?'” said Gordon in a recent interview.

Gordon, who is based in Los Angeles but recently completed a six-month residency in the Mills College Art Department, creates art work that functions as research toward understanding the way that sound influences the perception of space, and, conversely, the way that architecture influences the perception of sound. Her pieces in A+P+I are puzzling, implicitly prompting the viewer to examine the space in unconventional ways. “I think movement and sound are intertwined,” she said. “What you hear is based off of where you are — and it’s where you are physically as well as perceptually and emotionally … what it is that you’re actually trying to pay attention to.”

Gordon contributed two other installations to the show, which also features innovative work by her fellow 2015 A+P+I residents, Zarouhie Abdalian and Weston Teruya. The others, titled Linda and Tammy 3, work in tandem to create a joint viewing experience. For these, Gordon positioned high-frequency directional speakers around the gallery, each playing simple tones directed at her sculptural targets. The targets are handmade ceramic diffusers that evoke large, organic ripples, some of which are mounted on apparatuses containing sculptural elements — such as fabric, felt, or drywall — that absorb the sound, reflect it, or add a visual component that the sound can pass through unaffected. The set-up constitutes the boundaries of a sonic sculpture invisibly occurring between the tangible components of the piece. The last element is the viewer, whose body necessarily disrupts the flow of sound through the space, acting as a moving diffuser.

But that disruption on the part of the viewer is more of an activation. Whether consciously or not, the viewer takes on an authorial role, determining his or her perception of each sound element by walking around the built environment, exploring the dramatic changes in tones that occur based on one’s positioning inside it. In that way, Gordon’s piece amplifies the malleability of sound as a medium and the ambiguity surrounding its perception — a characteristic that she refers to as “slipperiness” — and invites the viewer to become a sculptor of that slippery substance merely by listening.

Linda and Tammy 3 can never be experienced in total, only one position and one moment at a time. As listeners move around the space in an inquisitive dance, they gradually become aware of the irreconcilable vacillation between the sound determining their movement, and their movements determining the sound. “My goal is for someone to be aware of their own body and aware of their own space and what the space is doing to them,” said Gordon. “I don’t think that sound perception is just a scientific thing. I think it’s very much cultural — it’s very much our own selves and how we relate.”