.Filling Up at the Fifth Wheel

Open since 1946, this classic San Leandro truck stop is a time machine. 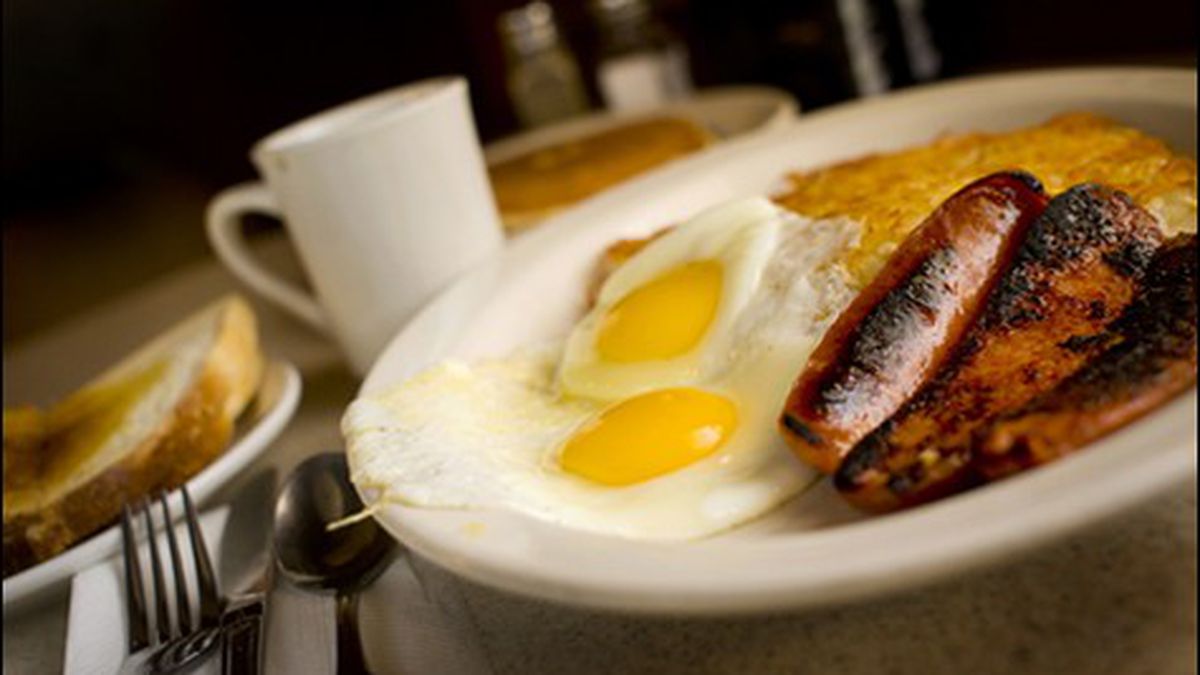 Long ago, in a pre-Cheetos era, people had to survive from meal to meal without snacks. Before-school breakfasts had to last. Candy and Coke machines and kitchenettes did not yet augment every factory and office space. Fast-food oases did not dot all roads. At sea and in the fields, workers could not pluck PowerBars from their pockets. No one could afford to forget to eat. Planning ahead, truckers pulled into truck stops to load up.

Back then, when only doctors knew the word “cholesterol,” Fifth Wheel Food was one of those truck stops. When Fifth Wheel Food opened in 1946, I-880 did not yet serve San Leandro, so San Leandro Boulevard was a major thoroughfare. With its huge red sign, this tiny creekside diner surely shone like a beacon through the fog, beckoning harassed and hungry souls. That sign still stands. Inside, amidst vintage wood paneling, family-size tables, ruffled curtains, and the type of counter at which cops and drifters throw back cups of black coffee in films noir, Fifth Wheel Food serves the same low-priced, hearty, home-style meals it served back then, in that era when meals had to be meals.

Chicken-fried steak comes with eggs, toast, and more. Thick-sliced ham, ditto. Patty melts come with French fries or — for the cautious — salad, fruit, or cottage cheese. Fluffy, fragrant French toast and puffy half-inch-high, six-inch-wide pancakes come with eggs and your choice of bacon, ham, hamburger, breaded chicken, or seven different types of Farmland Foods sausage, including hot-link, jalapeño/cilantro, and linguiça, as a nod to San Leandro’s heavily Portuguese past. Originally open around the clock, Fifth Wheel Food now serves just breakfast and lunch. But either one might well keep you stuffed until dusk.

Meatless options include salads and vegetable-cheese omelets. Hash browns are golden-crispy outside, delicate inside — and vast. Grilled-cheese sandwiches, piled high with American, Swiss, or cheddar and especially tasty on sourdough, are big melty dreams. (Their fourteen fleshy counterparts include burgers, breaded-chicken-and-cheese, and BLTs.) Meat-shunners can also get substitutions: hash browns or fruit, say, instead of the standard meat on breakfast plates.

Meatless or not, meals here are plated in huge portions that truckers would love, and served quickly and kindly — usually by Won Lee, who was eight years old when his parents moved to the United States from Korea in 1978 and bought Fifth Wheel Food. His father had learned about this kind of cooking while working in a US military cafeteria in Korea. Won’s mother still helps in the kitchen, a compact slot in an already compact restaurant. (At peak hours, expect to wait. Outside.)

As the diner’s third-ever owners, the Lee family has changed very little about it — give or take a teriyaki-chicken-cheese omelet or two. What you see, feel, and eat here asserts the unpretentious authenticity that comes only with history. The vintage Norris stainless-steel milkshake machine, dishware in a ranch-brand motif, speckled red linoleum floor, framed lake-and-mountain paintings, giant wooden fork and spoon, “HERE TO SERVE YOU” sign, fourteen built-in stools along a counter lined with napkin dispensers, jelly racks, and sugar jars: It’s not ersatz.

Out of the past, too, is how you are asked, and then receive, exactly what you want, exactly how you want it. “Traditional Breakfasts” comprise two eggs as you like them; two slices of wheat, white, sourdough, or rye toast; and your choice of hash browns, grits, fruit, cottage cheese, or rice (the owners are Korean, after all). Those eggs will be as firm or runny as you wish. Want the margarine scoop not on your piping-hot, creamy-soft grits but on the side? Cheese, butter, gravy, dressing on the side? Butter instead of margarine? Hash browns a little crispier than usual? Coming right up. “We concentrate on each dish as it’s ordered,” Lee said. “If a particular person likes a particular thing a particular way, we always keep that in mind.”

Savoring a tall tuna-salad sandwich lavished with lots of lettuce, onions, and what she called “extra care,” Irma was reminded of meals relished long ago in small-town Pennsylvania diners whose cooks were also their owners. Tuffy and Ted declared their omelets fluffy and well-filled.

Trendy food today tends to be light and feminized and parcels out indulgence in small showy bits: the mini-cupcake, the pork-belly bun. We don’t want to admit how many times, after a trendy restaurant meal, we have bought (or at least craved) fast food en route home. At authentic diners, indulgence is such a matter of course that it is not technically indulgent. A mug of hot chocolate at Fifth Wheel Food comes topped with a heaping whipped-cream peak. You are not asked first whether you desire whipped cream. (Because, in diner-world, who would say no?) It arrives, tremulous and towering and fluted, by default. Toast comes pre-buttered. With nothing to prove and stomachs to fill, heavy and oily is just how this food is.

The de-dinerization of America might make us live longer and be less obese, but has it also left us effete and unsatisfied?

On another visit, gloriously salty-sweet pineapple-pork sausage glistened rosily alongside two big eggs fried three-quarters of the way to firm, exactly as requested. Coffee refills arrived without our having to ask. A frosty chocolate milkshake, big and rich enough for two to share, was sheer simplicity. But that’s the point here, the point that’s not meant to be a point: It’s good because it’s simple, because this is food that says: You’ve got a hard road ahead, so sit down. Relax. &#8;

Next ArticleOpening Day at Hawker Fare: a First Look