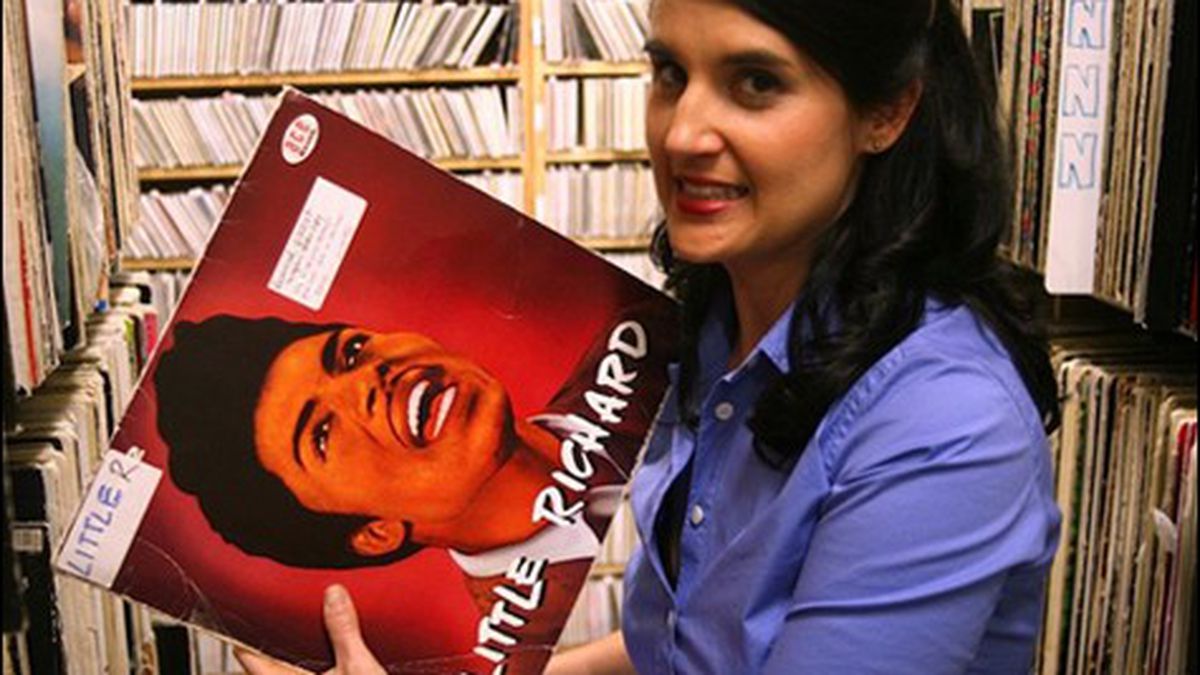 The most obvious symbol of KALX’s longevity lies in a glass case in the station’s lobby — or rather, the nexus of corridors that passes for a lobby. It’s a Cuban cigar box from 1962, with inputs on one side and outputs on the other. Invented by two particularly enterprising students in UC Berkeley’s engineering department, it was used to transmit a weak signal from Ehrman Hall dormitory, site of the campus’ first carrier current station (i.e., low-power AM). In 1967, the UC Regents secured a license for 90.7 FM, rendering it a ten-watt station. It wasn’t until 1982 that KALX jumped to 500 watts, becoming the alt-radio powerhouse it is today. Recapping that history, KALX’s General Manager Sandra Wasson beams.

“This was the original console,” she said, pointing at the glassed-off cigar box during a cursory station tour last Friday. Wasson half-smiled in a way that seemed almost conspiratorial. “It started out as a project.”

Now approaching its fiftieth anniversary, KALX is one of the longest-running college radio stations in the US, operating on roughly a $200,000 annual budget ($50,000 to $70,000 of which comes from listener donations and $172 of which comes from UC Berkeley, which also donates a space in the basement of Barrows Hall) and a lot of sweat equity — the station has three paid staff members and roughly three hundred volunteers. In a landscape that’s seldom hospitable to college radio, KALX appears to be thriving. It’s a bright spot for anyone entranced by the romance of terrestrial radio, but it’s also a utility, even for people who’ve long abandoned the era when the FM dial was one of our primary vessels for information. Local musicians get their first star turn on KALX. Small nightclubs use it as a promotional arm. Student DJs learn the basics of ProTools. Volunteers get access to the station’s library of about 90,000 albums. Listeners get an experience that’s not only unblemished by advertising, but also free of the genre balkanization that defines mainstream radio.

That might explain how KALX appears to be thriving at a perilous time for college radio. Over the last eighteen months, three high-profile campus stations have been sold: The most famous, locally, was University of San Francisco’s $3.75 million sale of its license to Classical Public Radio Network, which bumped KUSF from its home at 90.3 FM, relegating it to a digital stream and stirring mass protests. Then there was WRVU 91.1 FM at Vanderbilt University, which fizzled off the air after its licensee, Vanderbilt Student Communications, decided to sell its 14,500-watt signal to Nashville Public Radio for $3.35 million, creating a wave of organized protest that closely resembles the dispute over KUSF. One of the most lucrative sales was that of KTRU at Wasson’s alma mater, Rice University, which ceded its 50,000-watt license to the University of Houston for $9.5 million.

At the time it was sold, KTRU had one of the strongest college radio signals in the country, said Gregory Weston, president of the national organization College Broadcasters, Inc. and general manager of WPTS 92.1 FM at the University of Pittsburgh. That made it a hot and highly contested commodity. “Rice University was having some issues,” Weston said, “and that was a 50,000-watt signal in a popular market.” In statements defending the sale, Rice University president David W. Leebron blamed the economic downturn, deeming the sale necessary to bolster university coffers and stave off faculty layoffs.

That’s become a common thread in campus radio sales, Weston said, adding that, at a time of dampened state support and diminished endowments for private universities, radio stations have become an attractive revenue source. Often, beleaguered public radio stations and endangered college radio stations have to squabble over an ever-contracting bit of acreage. In the case of the KUSF sale, for example, Classical Public Radio Network had lost its slot at 102.1 FM to the classic rock station KFOX, which is owned by one of the big players, Entercom Communications Corporation. Wasson said she can sympathize with both sides. After all, there are a finite number of signals available in the Bay Area, and right now they’re all taken. And while KALX isn’t inoculated against the miserable fate that’s befallen some of its peers, Wasson isn’t too worried about losing it. The station has an extremely strong connection to the university, given that it broadcasts college sports and campus announcements, while serving as a training ground for students interested in media. More importantly, it’s sustained an enviably high reputation among college radio buffs. Last fall, Washingon Post blogger Daniel de Vise gave it the coveted number-one spot on a list of ten best stations of its kind.

Much of KALX’s appeal derives from its compulsory, multi-genre format, a credo it adopted in the Seventies and has sustained to the present day. Since each DJ is required to play between three and four different styles during his or her shift, with four new songs per hour, the programs are anything but predictable. Moreover, they deliberately accommodate the kind of music you wouldn’t hear on commercial stations, which generally hew to the rule of songs that last three and a half minutes, have an immediately catchy hook, and fit into a particular genre. That makes it stand out in a landscape where four major companies control a broad swath of the FM dial, and even non-commercial stations are leaning toward the streamlined model of a single programmer controlling all the content on several stations.

Wasson sites the anti-format format as a particular point of pride, since it allows the station to remain an antidote to trends on commercial radio. It’s a community voice rather than a pre-professional boot camp; each show is individually curated, rather than engineered by someone with a promotional axe to grind. “I think it’s really important because it reflects our views of music,” she said. KALX DJs concur. Former operations coordinator Erin Prunchak said variety is crucial from a listener’s perspective, even for pop music junkies. (She confesses to being one of them.) “I actually think I’d get bored very quickly with a block program,” she said.

With that ethos, KALX tends to attract a particular type of personality: that of the ardent music geek, or the committed locavore, or the old-fashioned radio fetishist. The station has long been a training ground for journalists — CBS reporter Thuy Vu and former Express reporter Will Harper are both KALX news department alumni — but it’s also a haven for lifers, even if rapid attrition is part of the station’s business model (a KALX DJ is only allowed to keep his or her time slot for a year). Wasson is the quintessential example. She cut her teeth as a college radio DJ at Rice before coming to KALX in 1988, when the station was located a couple blocks from campus on Bowditch Street. She says some of the volunteers at KALX predate her, and have no intention of leaving.

Such a high level of commitment isn’t unusual in the college radio world, and it makes Weston optimistic. He admonishes radio watchdogs not to presage college radio’s imminent demise, even in light of the recent sales. “The outcry against the sales of KUSF, WRVU, and other college stations, as well as the success of College Radio Day, demonstrate that college radio is as important to its staff members, audience, and artists as ever,” he wrote in a recent email. “Personally, I remain bullish on both the present and future of college radio.”

Wasson concurs with that sentiment. She’ll help present a full lineup of fiftieth-anniversary festivities throughout the month of September, with a historical exhibit at Rock Paper Scissors gallery in Oakland and a Friday night concert series at Berkeley Art Museum. If the events prove anything, it’s that KALX is far more than a terrestrial radio station; it’s a veritable institution. And as such, its impact far exceeds 500 watts.

Previous ArticleCongrats, UC Santa Cruz — You Are the #2 Stoner College in America