.Feeding the Demand for Mid-century Modern 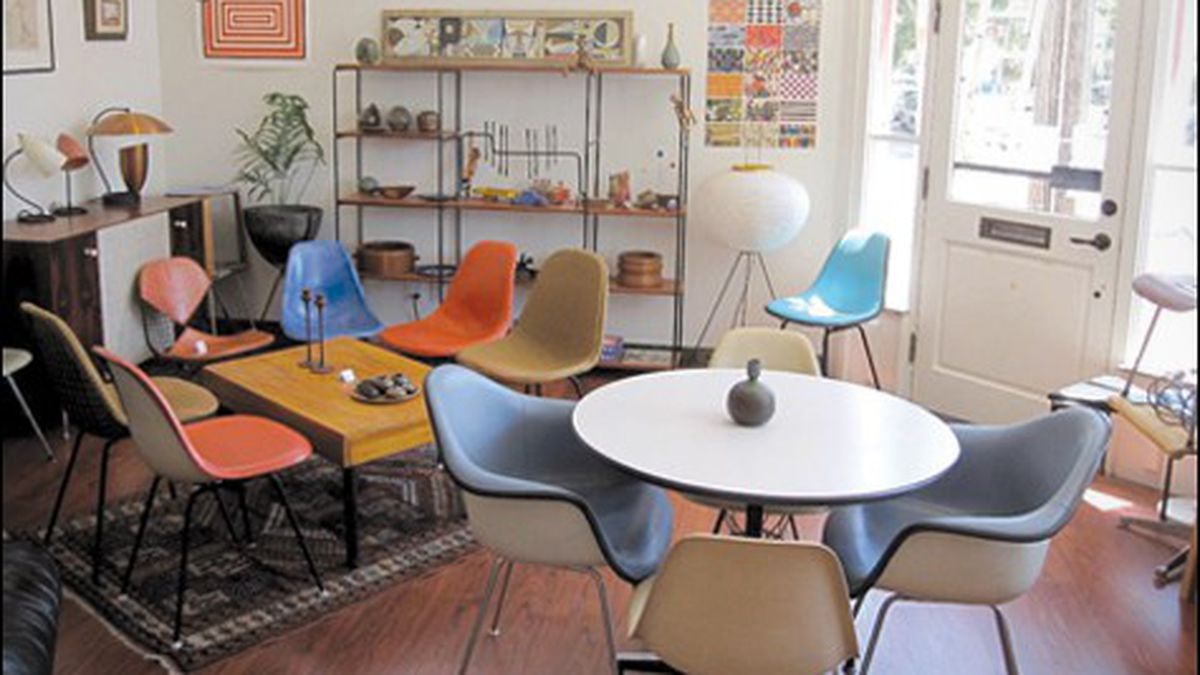 When Bruce Crawford, the owner of Modernaire (2101 Dwight Way, Berkeley) opened up his first modernist furniture store 25 years ago on the East Coast, “modern” was associated with all things art deco. He spent the first half of his career hunting for 1920s and 1930s-era pieces. But about ten years ago, Crawford began to notice that mid-century modern furniture — particularly anything from Denmark — became all the rage, and that there was a shift toward an appreciation for simple lines and biomorphic shapes.

“It coincided with the disappearance of all the art deco stuff,” Crawford noted. “It was hard to find any good art deco anymore.”

More than three years ago, he moved out of a collective of modern furniture purveyors in San Francisco to open up the Berkeley shop, and he purposefully offers a wide array of modernist goods from the 1930s up through the 1980s, with the bulk falling in the mid-century category. And in addition to furniture — including one of his current favorites, a 1950s Peter Hvidt solid teak credenza — Crawford sells kitchen and dinnerware, as well as art glass, pottery, lighting, and artwork.

Showing off a vintage 1930s floating, double-decker waffle iron, he said, “There is a reason why I have everything in my store. It’s all selectively chosen, and there’s something significant about it.”

But the definition of what’s modern isn’t the only thing that’s changed over the course of his career — another is that he now has more competition. “It’s not a niche market anymore; it may even be mainstream,” he said. “I’ve noticed a lot of mid-century modern stores popping up in the East Bay lately. There’s a bigger market and a greater appreciation for it.”

Lynne Jensen‘s 6,000 square-foot showroom, Klassik by Lynne (1313 67th St., Emeryville; KlassikByLynne.com), focuses exclusively on Danish modern, and she hit the industry sweet-spot organically. A native of Denmark, Jensen returns to her home country three to four times a year to forage for new pieces. She is choosy, with an eye for detail, and insists on meeting every person she buys from, especially those who are refurbishing pieces.

“When I buy in Denmark, we do a big effort to meet with the vendors,” she said. “We spend a day in their workshops. We take pictures, make notes, we grab the tools and help them out a little bit. We go through what kind of oils and lacquers are used, and why they clean with this and whether this oil will enhance the wood or damage it.”

Her most recent finds are then stored in a Copenhagan warehouse, and every two months, a new shipment comes in by container ship to the Oakland port.

In addition to finding the vintage pieces, Jensen also has been able to source original upholstery, as well as strapping and springs for chairs so that Jensen and her staff can do repair, refurbishing, and finishing work on-site. (Jensen also provides furniture appraisal and interior design consultation.)

Jensen says the demand for Danish modern “is still peaking,” and as evidence of that, this month she’s opening a new store, Klassik Living (1619 San Pablo Rd., Berkeley), that will feature still-in-production modernist pieces, such as the iconic Peacock Chair and Shell Chair by Hans Wegner. “We’re going to blend really unique vintage with the new, still-in-production to make the colors pop a little,” Jensen said of the new store. “We’ll have gift items and I’m going to do a little more with mid-century kids’ furniture. It’s going to be fun.”

Justin Hoffman‘s store, Just In Modern (901 Hearst Ave., Berkeley; JustInModern.com), has taken a markedly different approach, with a focus on American designers of the mid-century era. “Everyone is doing a lot of Scandinavian and Danish designers,” he observed. “I feel like there’s a real lack of good American design that’s available at a reasonable price. My focus is on Eames and George Nelson, and all those designers under the Herman Miller umbrella, as well as the California designers that were lesser known in the Fifties that produced all of this amazing stuff.”

His obsession with good, modernist design — and Eames furniture in particular — plus his frustration with the wine industry, is what made him switch careers a couple years ago from sommelier to mid-century modern furniture dealer. “It’s such an interesting time period,” he said of the 1950s and 1960s. “I’d read these old books to see what I can find out about it. Like Eames, after the war, they wanted to come up with a low-cost design for a chair that would be portable and well-made. They came up with the fiberglass idea from looking at World War II shock helmets, and they got this idea to mold the shape into a human form and create low-cost seating. That’s the kind of thought process and what goes on behind the design that is so fascinating.”

You can also find vintage furniture, textiles and decorative arts at [email protected] (3811 San Pablo Ave., Emeryville; RetroAtHome.com); dig for modernist gems at Urban Ore (900 Murray St., Berkeley; UrbanOre.ypguides.net); and cybershop for chairs and tables from designers like Herman Miller and Noguchi at the Berkeley-based online store The Magazine (TheMagazine.info).