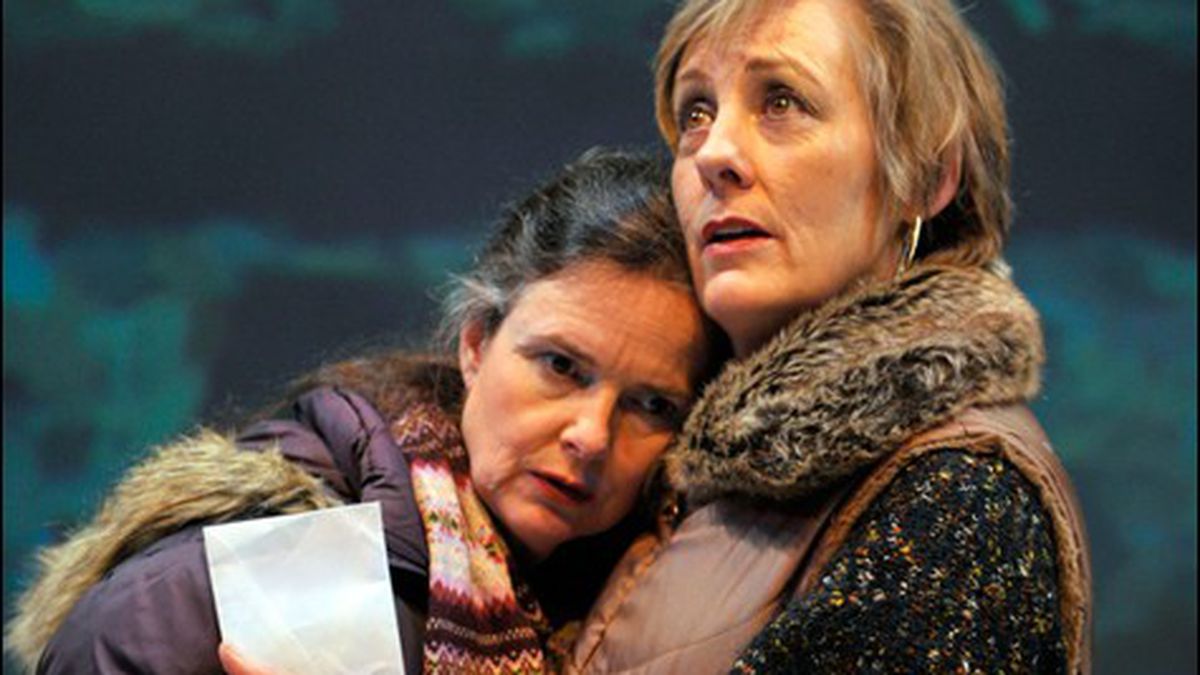 Authenticity is in short supply in Aurora Theatre's Our Practical Heaven.

In the not-so-distant future, cell phone reception will be ubiquitous, allowing us to have conversations or check our email even when we’re hiking deep in the woods. Bird-watching, on the other hand, may become a nearly extinct pastime because of climate change, and sea-level rise will decimate oceanfront property values. Technology will cause literary erosion in even the last bastions of higher culture.

Our Practical Heaven, which had its world premiere at Aurora Theatre last week, shows us such a world. A finalist in Aurora’s Global Age Project, an initiative to cultivate plays that address life in the 21st century and beyond, the play, by Anthony Clarvoe, is unfortunately a grating and disappointing effort.

While theater has become one of the last refuges for articulate speech and verbal and human interplay, Clarvoe bypasses all of this: In Our Practical Heaven, marital disputes unfold silently on characters’ cell phone screens for the audience to only imagine; banter is reduced to texting with txtspk that’s projected wordlessly; and powerful emotions are evaded using images of Facebook posts. Except for Micah J. Stieglitz’s video design, which creates visually lyrical backdrops of a forest, the ocean, and Fourth of July fireworks, technology ultimately hampers this play: The use of text messaging projected in real time feels gimmicky.

But the decision by Clarvoe and director Allen McKelvey to employ these tactics is only one reason why Our Practical Heaven fails. There are also issues stemming from its vaguely formed characters, stiff levity, heavy-handed depth, and affected lyricism.

The plot follows six women, encompassing three generations, who return to a beloved beach house every year to loiter under one roof. The home belongs to Vera (Joy Carlin), an elderly widow who always opens her door to friends, outcasts, and iconoclasts. Vera’s daughter Sasha (played by Anne Darragh) is a bundle of nerves, forever worrying about worst-case scenarios. She barks at her daughters to use sunscreen and to “hydrate,” and she panics at the possibility that her mother might trip on a box and die alone. And she’s a big whiner. Her daughters Suze and Leez (Blythe Foster and Adrienne Walters) complain about their mother via text. Suze, the eldest, can’t stand her mother’s self-absorption.

Willa (Julia Brothers) is Sasha’s oldest friend — the two are “honorary sisters,” as they say again and again. Vera took her into the family when she was down on her luck, and now she has become a ruthless businesswoman, but also a devoted friend and a selfless mother. All of these sides of her jostle against each other — and against the other women — at brief points in the narrative. And these are moments when the play wakes up. Mikiko Uesugi’s set design also helps liven things.

But that can’t make up for the fact that character complexity is given short shrift. Darragh’s overwrought performance as Sasha dominates the play. While her neurotic character could be played for laughs (or sympathy), she comes off as a shrill harpy — there’s no balance to her performance. Foster showcases contempt in big stage gestures. As Vera, Carlin gives the play’s strongest performance. There’s a peace and quiet and unspoken texture to her performance that is absent in the rest of the cast. Brothers’ Willa is perhaps the most fleshed-out character.

Ultimately, Clarvoe’s slogging saga aims to thickly paint a sense of shared experience. Magz (Lauren Spencer) is Willa’s chronically ill prodigal daughter, who’s treated like an adopted sister by Suze and Leez. Leez is ethereal, a spiritual bird. “Spouses come and go,” says Willa. Sure, the girls groan when mom barks at them to clean the house, but soon shared chores become a dance of synchronicity and tossing pillows. Scenes of lazy lollygagging show the intimacy of doing nothing together. Lest the hugs and cuddles and effusiveness don’t make it clear: The fiercely close females in this blended family cherish one another. But they also seem stranded and marooned at their precious beach house — six characters in search of an objective.

Ode to the Onion, in Memorium