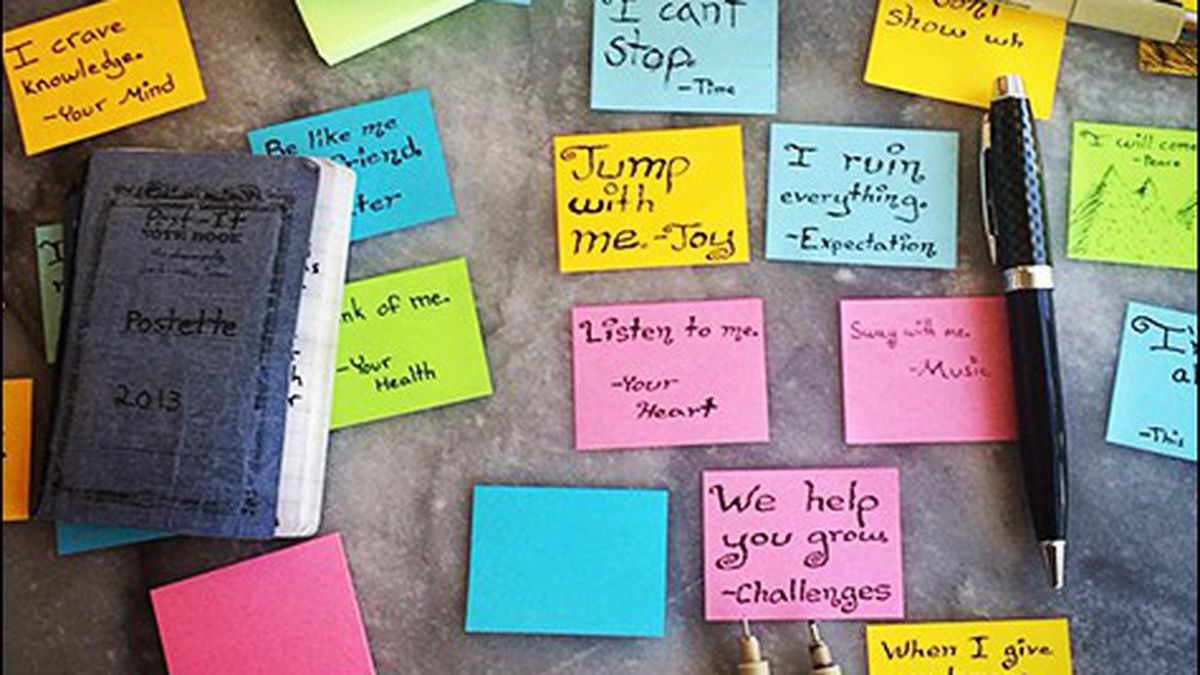 At Elmwood Cafe in Berkeley one morning, a man sitting at one of the tables kept looking out for the bus — but not to catch it. When he spotted the 51B trundling down College Avenue, he slipped out the door, darted between cars, and affixed a Post-it note onto one of its windows.

The man — who wishes to remain anonymous — keeps a number of Post-It Notes (or Postettes, as he calls them) in his pocket and his notebook, sticking them up around Berkeley, or wherever he happens to be, throughout the day. Often inspirational, sometimes funny, they appear at bus stops, on bikes, and on cafe tables.

Mr. Postette, as I’ll call him, started the project a couple years ago, and has since become somewhat of a local mystery. His Instagram account has attracted more than 1,800 followers, and last year, Berkeleyside asked its readership for leads as to his identity — to no avail.

As you might guess, Mr. Postette has a quiet manner. With curly hair, a slight frame, and boyish features, he looks part hobbit and part elf. He can often be found at Elmwood Cafe, drinking coffee and making Postettes with an assortment of colored Micron pens. While he prefers to keep his identity secret, he doesn’t object to people meeting him. But even some of his fans don’t want to know who he is.

“One time over on Alcatraz and College, I saw a bike and I liked it, and I put a Post-it note on it,” he explained. “The next day I walked by and saw that the person had put tape around the Post-it and stuck it to their lock. So I left another Post-it note, and they taped it to their bike. Every couple of days I’d come by and I’d leave a note for that person. And one day I was over in that area, just walking around, and I overheard a couple of people talking about the Post-it Notes…. I said, ‘You guys talking about Post-it Notes?’ and showed her the one I had in my hand. And she said, ‘Oh, it’s you. I never wanted to meet you. You’ve been leaving them on my bike. I thought it would be a great mystery.’ I was like, I shouldn’t have said anything.”

Ironically, Mr. Postette originally began this endeavor in the hopes of making real-life connections. Specifically, the concept was a reaction to Facebook. “I got really tired of Facebook,” he said. “It felt really fake to me. I wanted a more real experience. So I’d go out and post on other people’s walls, and ‘like’ things in the real world. I had a pad of Post-its and I wrote ‘like’ on them, and walked around town and put them on things I liked.”

Soon, he started leaving comments, and people would comment back. Then he’d “like” their comment. “People were leaving notes back, so I knew people were reading them,” he said. “I thought well, maybe I should write something. So I’d write nonsense … stuff like ‘You may be free but parking isn’t.'”

Mr. Postette said he started to leave inspirational notes mainly because he needed to be inspired. “At one point, I was feeling really unmotivated and uninspired to do anything at all, so I wrote a bunch of quotes down on Post-It Notes and put them up on my wall, in my room. I took those down, and started putting them around town.” He uses different color notes for different themes. “The past is usually green. Change is blue. Hope is yellow. A lot of them are yellow because I like yellow. Sometimes I’ll assign a secondary color. Pink is a secondary color for hope.”

Occasionally, people take down the Post-its. Other times they take pictures of them. Meanwhile, Mr. Postette has remained anonymous. “I really wanted a quote that I could put my name at the end of — that still hasn’t happened yet. But you know these things, they speak for themselves, so I don’t need to put my name to anything.”

Over time, Mr. Postette has taken more care in writing his notes. When I see him at the cafe, he is utterly absorbed. “In the beginning I didn’t care about the handwriting as much, but you know, as I gain more followers [on Instagram] and more people are reading them and taking pictures of them and putting them on their Instagram, it makes sense that I wanted it to look nice.”

Although the notes absorb his attention, Mr. Postette said he doesn’t really know why he continues to do them. He doesn’t think of himself as an artist. “They’re a distraction for me,” he said. “It keeps me doing something good, as opposed to doing something else.”

Bobby Seale Discusses A History Of Resistance At Oakland Museum of...