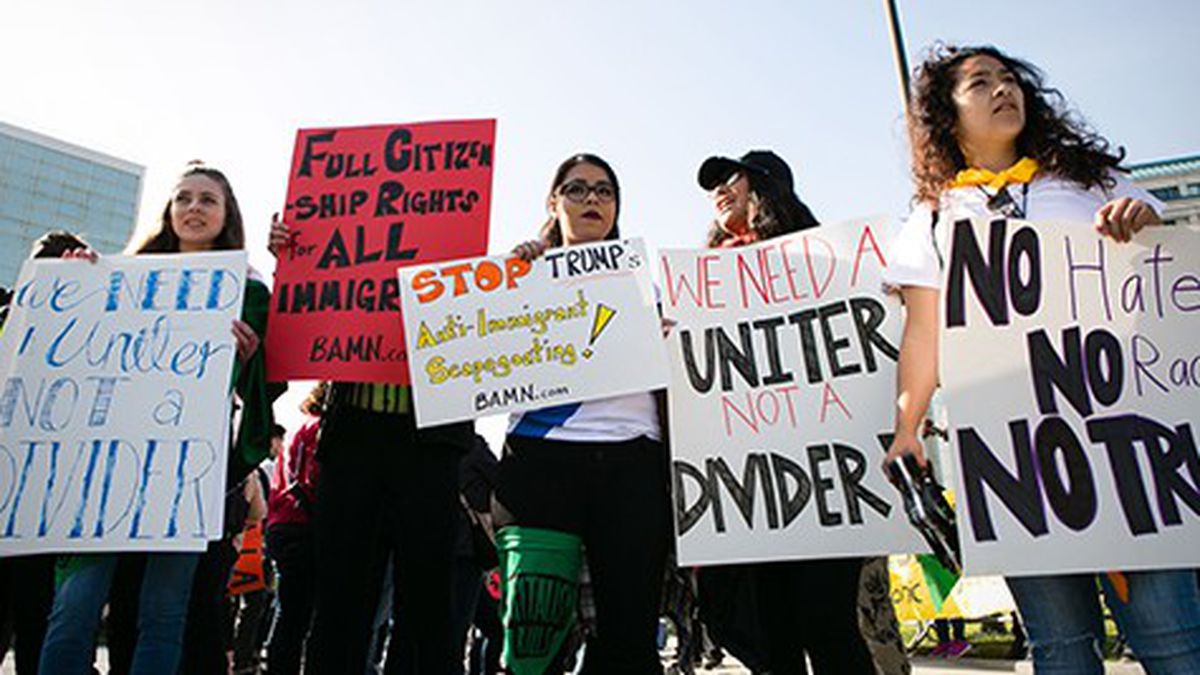 Last week, hundreds of local activists did what no GOP candidate could this presidential-primary season: seize media attention from Donald Trump.

Old Bayshore Highway is a wide suburban thoroughfare flanked by parking lots and the drab Hyatt Regency, where all last weekend Republican presidential candidates mounted the stump to serenade state party delegates at the California GOP Convention. But by 9 a.m. on Friday, cops from every agency in the county had barricaded and surrounded the hotel, and it was clear that the normally sleepy, private political gathering would soon be co-opted.

A diverse coalition of protesters had gathered ahead of a keynote speech by celebrity real estate mogul and Presidential hopeful Donald Trump. As the crowd swelled, a Burlingame police officer struck a conciliatory tone and pleaded for protesters to stay out of the street: “We gave you the whole sidewalk.”

But before long, protesters had established human barricades at both ends of the block. By noon, they’d surged through police lines toward the hotel’s entrance. Law-enforcement in riot gear battered them back, leading activists to rally at other Hyatt entrances. Police and security scrambled to padlock doors from within. At times, the scene resembled a hotel besieged.

Trump was scheduled to begin his chat at noon, but — to the protesters’ delight — his caravan couldn’t even exit Highway 101. One indelible image garnered news coverage worldwide: Trump and his entourage stopped on the freeway’s shoulder, clambering awkwardly over a concrete median, ties flopping and flaccid in the wind.

Mainstream news organizations reported “eruptions of violence” and “chaos” at the protests, describing the activists as a “rowdy mob” — even though the five arrests and as many scuffles, and next to no property damage, was rather mild, at least by the metrics of Bay Area protests.

At the same time, the action was fierce and familiar, a continuation of activists’ campaigns against police killings in particular. In terms of diverting and seizing the attention lavished on Trump, it was also effective.

The Anti Police-Terror Project protested alongside activists from Black Lives Matter Bay Area, BlackOUT Collective, and Black Youth Project 100, among other organizations. “Donald Trump has used the most powerful media platform in the world to spew hate,” Oakland activist Cat Brooks explained at the event. “We’re here to talk about how Black lives are never at the center of the democratic process.”

BlackOUT Collective member Deirdre Smith, a firebrand on the bullhorn all morning, echoed Brooks. “Donald Trump has misused his media platform,” she said. “We’re taking it back.”

There were theatrics: Berkeley teenagers, who went by the names Dropz and Mobby, brought a Trump cutout—and eggs to throw at it. (Later, eggs found different targets, in the form of cops.) Activists torched a Trump piñata. And many protesters clutched signs featuring caricatures of the candidate.

One particularly infernal rendering was captioned El Maligno: The evil.

There were masked protesters and topless protesters. A mortgage broker who works nearby walked his impeccably kept papillon along the periphery. Union members decried lousy wages for contractors currently remodeling the Hyatt. Sergio Alfaro, a 23 year-old caretaker from San Francisco, captured the motions of the crowd in his sketchbook, inspired by the drawings of Ralph Steadman.

Other activists emphasized solidarity with people of color. Protesters clutching a “We’re Here We’re Queer” banner, for instance, consciously styled themselves as auxiliary, allied with groups such as Black Lives Matter but keen to cede the spotlight.

Likewise, a group of protesters infiltrated the Hyatt and unfurled a massive “Stop Hate” banner in the window — a maneuver that necessitated repelling gear. After security ejected them, Linda Capato Jr. described their motivations succinctly: “We’re a group of queers fighting in solidarity with Black and brown people.”

Hotel guests attempted in vain to wheel a towering luggage cart through one of the human barricades. In hopes of passing through, they told protesters that they employed five Mexicans. It was unconvincing. And when they turned back, they came face-to-face with a crowd barreling after a Trump supporter who, after being pinned against a hedge by the media scrum, was hoisted away by cops.

In another confrontation, a masked protester snatched an American flag from a handful of young Trump supporters and lit it on fire. This move spurred debate among activists about the wisdom of certain tactics.

When details first broke of Trump’s visit to the Bay Area, comfortable progressives scoffed. They thought the candidate of consummate puerility touching down in the region seemed like a punch line.

But for the several hundred protesters who dogged and stymied his keynote speech, it was very serious. To them, Trump’s wrathful rhetoric, especially toward people of color, actually evoked discrimination and violence by law enforcement, which they’d been decrying in Oakland and San Francisco for years.

Days before the Trump action, Edwin Lindo — one of the so-called “Frisco Five” hunger strikers protesting what they consider a police department steeped in racism — told a video crew: “People say San Francisco isn’t Ferguson. They say it’s not Baltimore. And it’s not. It’s worse.”

Lindo echoed James Baldwin’s 1963 assertion that “there is no moral distance … between the facts of life in San Francisco and the facts of life in Birmingham.” So did Brooks, who said that the Bay Area isn’t liberal. “It can be seen in the fact that Oakland was third in police killings per capita last year … [and] in the fact that SFPD just executed another person,” she argued.

It was in this spirit on Friday that the protesters, having hijacked the proverbial megaphone, used it to promote yet another action: the next day, a rally at the Mission District police station, in support of the Frisco Five.

In other words, law enforcement’s dispersal order that afternoon wasn’t the end. It only spurred further demonstrations.