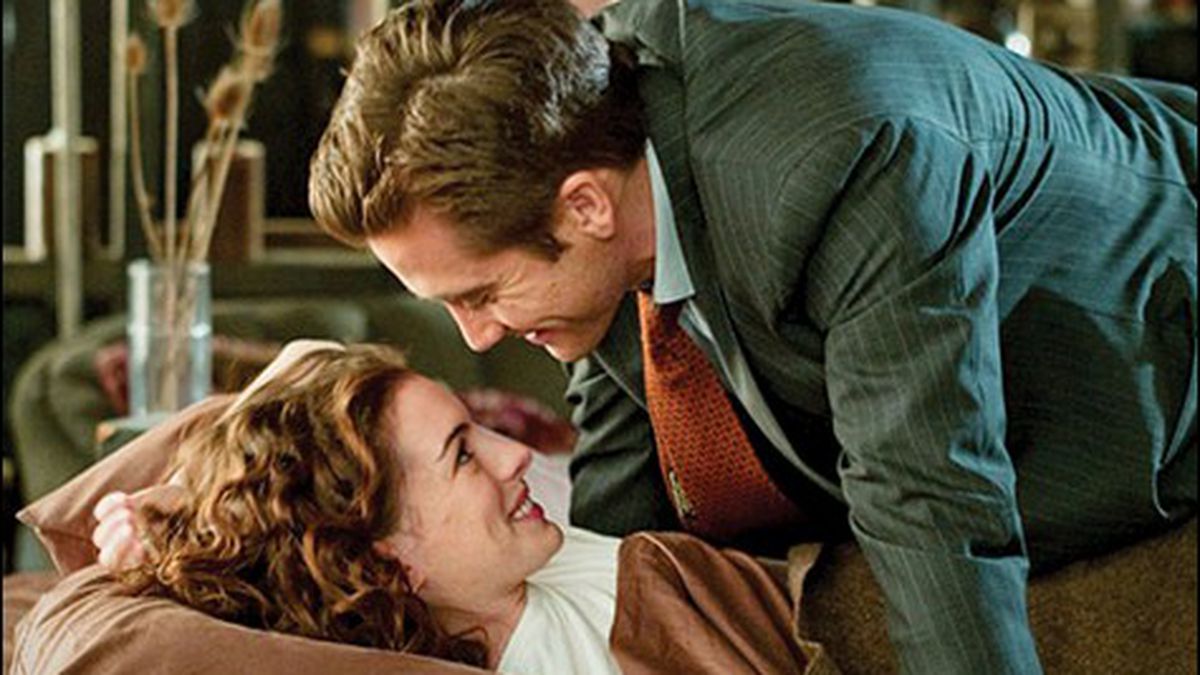 Erection Day: Love and Other Drugs and Made in Dagenham

One goes soft at the wrong moment, but the other stays hard on the picket line.

Jamie Randall is a difficult guy to like. From the moment we meet him in Edward Zwick‘s Love and Other Drugs, Jamie (played by Jake Gyllenhaal) impresses us as a handsome, slick, conceited con artist whose number one occupation is having sex with the nearest available female. Or maybe his actual favorite hobby is breaking the ice and talking them into it in the first place, whether it’s a shtup or a new TV. He’s a born hustler.

To make matters worse, Jamie’s family is just as self-centered and obnoxiously gregarious as he is, particularly his fat slob younger brother, Josh (Josh Gad), who loudly brags at a family gathering how much money he’s made in IPOs. In fact, it’s Josh who gets Jamie started in the pharmaceutical industry after Jamie gets fired from his electronics store job, for boffing the boss’ girlfriend.

Oh, terrific. That’s just what we wanted to spend a hundred minutes watching — a charming but slimy pitch man frantically pushing Zoloft and Xanax to doctors and chatting up the women in the medical office. Jamie impersonates an intern and tries his pick-up line on a patient, Maggie Murdock (Anne Hathaway). And it works. The man’s irresistible.

This is one of those romantic comedies in which the guy and the girl both go miles out of their way to convince each other that their budding relationship is meaningless to them, that they’re only in it for the quick sex. It’s the old “defense mechanism” plot device. Maggie does it because she’s been hurt before — by Jamie’s rival pharma rep, no less — but with Jamie we believe he really is as superficial and uncaring as he acts.

The two lovers try to outdo each other in the “who cares” department with their alarmingly off-putting interpersonal communication. So we get callous salesman jokes, callous sex jokes, even callous jokes about the homeless man who rescues drug samples from the Dumpster. We’re growing calluses.

What a spectacularly maudlin and repellent piece of work Love and Other Drugs is. First it sets up a vain flimflam artist who’s obviously cruising for a massive change of heart in the third act. Then it fixes him up with a transparently fake-hedonistic girlfriend whose neediness, also blossoming in the third act, prompts the hustler’s conversion to a nice guy (“I’ve never cared about anybody or anything … till I met you.” Awww). Then, just for laughs, it sets the whole mess at the dawn of the age of Viagra, when hard-ons ruled the earth. Ouch!

If there’s any justice in the world, after caring for Maggie, Jamie will go blind from Viagra’s after-effects. The last shot of that particular film would be the sightless former stud sitting in a chair after losing his lawsuit against his former employer, remembering his dear departed hottie. He’ll still have an erection, but nowhere to put it.

What was Zwick thinking? For all its faults, 2008’s Defiance was a solid, if solemn, war movie — a reminder of the Edward Zwick who made Glory back in 1989, before he went down the overwrought potboiler trail with dreck like The Last Samurai and Blood Diamond. But his adaptation, with writers Charles Randolph and Marshall Herskovitz, of Jamie Reidy‘s book Hard Sell: The Evolution of a Viagra Salesman blazes new trails of loathsomeness, from crass to merely pathetic to two-hanky tear-jerky. We feel embarrassed for Hathaway, a genuinely beautiful screen presence, and Gyllenhaal, the onetime lonesome gay cowboy now trapped on Bareback Mountain. With any luck, this sad-sack movie will only hang around the ‘plexes a week or two before dropping out of sight, and everyone involved can go on with their lives as if nothing happened.

It may look like Norma Rae, but it’s as English as egg and chips. In Made in Dagenham, actor Sally Hawkins (Happy Go Lucky, Never Let Me Go) treads the same general turf as Sally Fields‘ union-organizing mill worker, the difference being that Hawkins’ Rita O’Grady and her sweatshop girlfriends stitch upholstery for a living in a Ford plant outside London, turning out Cortinas and Fiestas circa 1968. Other than that, same grievances and same solidarity, with the ingratiating addition of Bob Hoskins as a sympathetic shop steward.

Director Nigel Cole and screenwriter William Ivory don’t want the world to have and to hold with their story of British women factory workers on strike for equal pay and work rules. The filmmakers are content to wind up the agreeably cute nostalgia machine and let the actors flaunt what they’ve got.

Hawkins displays steeliness alongside her well-known crinkly vulnerability. Hoskins is all understated wiliness as the gals’ clandestine accomplice. As equally sympathetic Labor MP Barbara Castle, Miranda Richardson provides a viable alternative to Margaret Thatcher. Rita’s hubby Eddie (Danny Mays) has the good sense to mind the kids at home whilst his wife makes history. Meanwhile, one of the sewing machine girls is certifiably glam – Sandra (Jamie Winstone), the would-be model. And that’s the voice of Danny Huston on the phone as the big boss man in Detroit. No blood is spilt, justice triumphs, and everyone goes home happy. Just like in real life. Hooray for organized labor.