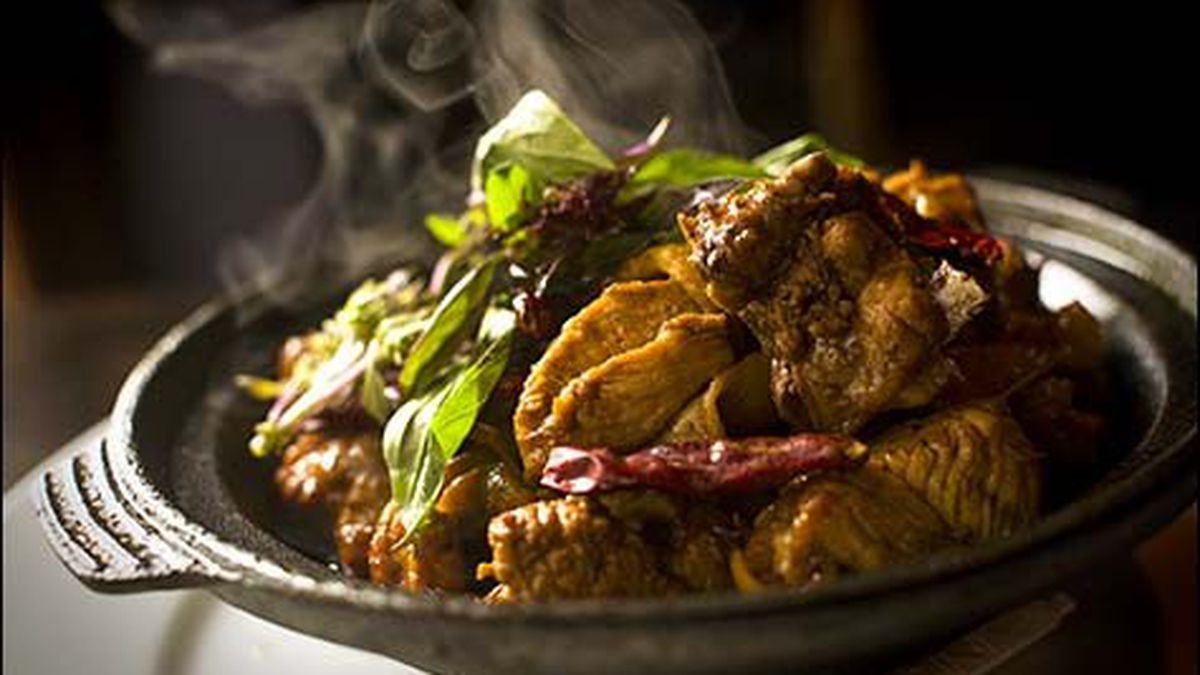 Dragon Gate, a cocktail-and-karaoke bar, has an unexpectedly broad — and tasty — Taiwanese menu.

The first thing you’ll notice about Dragon Gate Bar and Grill is the design. The new cocktail bar and karaoke joint in Oakland’s Jack London neighborhood has a look that’s full-on Chinese-y — dragon engravings, bamboo plants, stylized calligraphy, and red paper lanterns. Everywhere you look, there’s red and gold — down to the slinky, thigh-length qipao worn by the young women who work there. Everything is backlit so that the room exudes a purple and green neon glow.

This is the kind of bar where there’s a cocktail called “The Drunken Master” and another called the “Shanghai Noon,” and where the most popular feature is the private karaoke rooms in back, where Chinese-speaking twentysomethings order $160 bottle service and croon old David Tao ballads into the wee hours of the morning.

At a place like this, you don’t expect much from the food. Maybe there’s some dried squid or skewered meats — the Asian equivalent of beer nuts or French fries — to keep you from drinking on an empty stomach. Who would think that Dragon Gate would be the setting for some of the best, and most authentic, Taiwanese food in the East Bay?

Johnny Chang, the chef and owner, opened the bar in February, but it wasn’t until April that he launched a full-blown, and dauntingly vast, food menu. Chang, who’s in his forties, has been around the block. In the early Aughts, he owned a karaoke bar called Money Box in San Francisco, and he still runs a sushi joint in El Cerrito called Taki Sushi. But Dragon Gate is his first time putting out the kind of old-school, often labor-intensive, Taiwanese food he learned how to make as a fifteen-year-old kitchen apprentice in Tainan — arguably the food capital of Taiwan.

For Taiwanese Americans and expats who crave the tastes of their homeland, the noodle section of Dragon Gate’s menu is likely the biggest draw. Beef noodle soup — fresh Chinese wheat noodles and slow-braised beef served in a spicy, aromatic broth — is arguably the most iconic Taiwanese dish, and Chang’s tomato-based version is very good. Chang said it takes him four hours to make each batch, and it shows: The chunks of brisket and tendon were as tender as prime rib. Doubanjian (hot bean paste), which Chang fries in hot oil, gave the beef broth a sweat-inducing heat. Pickled mustard greens, the traditional condiment, provided a nice sweet-and-sour counterpoint.

Even better were the intriguingly named “idiot noodles,” which turned out to be a not-too-distant cousin to the more well-known zhajiang mian — a saucy, meat-based dish that’s sometimes likened to a Chinese bolognese. Dragon Gate’s version comes topped, bibimbap-like, with slivered cucumbers; half a braised egg; fluffy dried-fish “floss”; an assortment of pickled vegetables; and a big dollop of meat sauce made with ground pork, diced pork belly, soy sauce, and caramelized brown sugar. Mixed together, the combination — sweet, sour, savory, crunchy, and unctuous — was incredibly addictive.

There’s also has a whole section of the menu devoted to Taiwanese street foods. Grilled sausages were served, as is traditional, with slices of raw garlic, whose pungency helped balance out the sweetness of the sausage. (They also came with Pace Picante salsa, which isn’t traditional.) The five-spice braised cold items — eggs, dried tofu, seaweed, and assorted meats that have soaked for hours in a soy-sauce-based braising liquid — were a happy-hour bargain at just $5 for a small combo platter. Only the Taiwanese-style popcorn chicken, tossed with five-spice powder and fried basil, was a dud. The chicken was way too salty, and cut into chunks that were too big to crisp up properly in the fryer.

Even rarer than the street snacks and noodle dishes is Dragon Gate’s selection of home-style Taiwanese dishes, such as a simple, perfectly cooked dried-radish omelet. The sizzling “three-cup sauce” chicken, named after the sauce’s three main ingredients (soy sauce, sesame oil, and rice wine), was a deliciously savory stew — wonderful when scooped over white rice. What made the dish were the aromatics: thin ginger slices, basil, and whole cloves of garlic, all fried in an iron pot until the entire dish was insanely fragrant.

Depending on your point of view, Dragon Gate is either coolly atmospheric or garish and over the top — In the Mood for Love on the one hand or the latest Jackie Chan flick on the other. The sheer sensory overload, and the juxtaposition of so many different stimuli, has its own odd charm — the traditional Chinese furnishings mixed with a comically large TV projection (broadcasting sports programming, day and night), and sappy American Top 40 on the speakers.

The service, it’s worth noting, is well-intentioned and reasonably English-friendly, but also somewhat confused. In several instances, our servers had never tasted, and couldn’t describe, a cocktail or a dish that we asked about — and no one ever offered to find out. One dish we ordered never materialized. On a busy night, our water pitcher went a long time without being refilled.

All that is fine for a karaoke bar that happens to serve a few snacks on the side, but it’s clear that Dragon Gate has ambitions to be viewed as a dining destination. The food is certainly good enough. A little more finesse on the service side would go a long way.

As for the karaoke rooms, each one comes equipped with cushy couches, big enough to fit a dozen people. According to Chang, there are about 20,000 English songs in the database (plus a lot more in Chinese), and no room charge for the first hour if your group spends at least $100 on food and drink. If you spend $300, the room is yours for the whole night.

There’s a decent chance you’ll find me here for my next birthday celebration. So let me apologize in advance: I’ll be the tone-deaf one, working my way through as many Guns N’ Roses songs as I can find, pausing once in a while to slurp down some noodles.