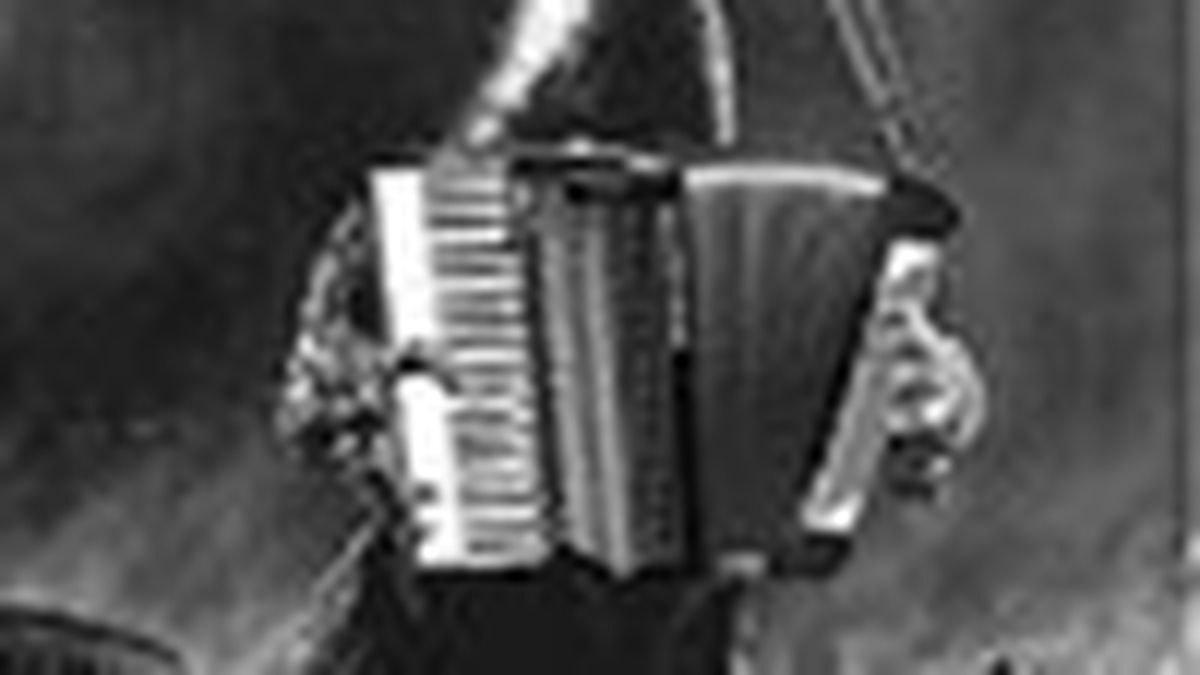 The Monster Accordions strike back

You want haunting goodbye songs, bouncy calypso songs, and gruff drinking songs that go one guttural step beyond Tom Waits? You want a stage presence bordering on performance art that rivets crowds on street corners and concert stages around the world, spawns fan sites as far afield as Russia, and is the subject of its own Yahoo discussion group? So … what’s going to be your lead instrument? An accordion, of course. They’re not just for polkas anymore. Seattle-based accordionist Jason Webley has been compared to Waits more often than he’d like to remember, but also to Randy Newman, Kurt Cobain, and the Pogues. At past performances, he has staged his own mock death — more than once — smashed piñatas, and served his trademark tomato cake. Three CDs into a career that took him earlier this summer to Britain’s high-profile Glastonbury Festival, Webley will appear at 8 p.m. tonight, Wednesday, at Oakland’s 21 Grand (449-B 23rd St., 510-444-7263).

This concert at the three-year-old avant-garde interdisciplinary art space (whose name, be forewarned, no longer indicates its original address) will launch the Monsters of Accordion tour, featuring Webley and Bay Area squeezeboxers Daniel Ari and Aaron Seeman. Oakland-based Ari is a dancer, comedian, and self-appointed “grammar czar” whose band, Bass Line Dada, rails against George W. Bushisms in its timely number, “Grammarians ‘R’ Pissed!” As a “Poet of the Oompacalypse,” Ari brings cutting-edge political discourse to, well, to the instrument most firmly associated in the public mind with kielbasa. Seeman, whose oeuvre as a composer includes the opera Opium: Diary of a Cure, is also a member of the Punk Rock Orchestra, an SF outfit that plays classic punk songs specially arranged for symphonic instruments. In PRO performances, Seeman has attracted special notice for bringing the Dead Kennedys back to life via such anthems as “California Über Alles” — which, first released in 1979, poked fun at then-governor and not-yet-Oakland Mayor Jerry Brown.

Lest you think the rock-accordion concept is a purely West Coast and purely new invention, consider the careers of Sweden’s Accordion Pimps, Spain’s Superelvis, and Slovenia’s Orlek — not to mention Eddie Vedder, Oingo Boingo, and Nils Lofgren (and Waits himself). Last year’s Monsters of Accordion show at 21 Grand was so popular that it inspired the performers to return, after which they’ll mount a tour of the Northwest. — Anneli Rufus

Zadie Smith was born in London in 1975, but don’t hate her because she’s published two fabulous novels before turning thirty — or because she ain’t bad to look at, neither. It’s better to just settle into the funny, kaleidoscopic world of White Teeth and The Autograph Man (and Smith’s phenomenal short-story contribution to McSweeney’s 6, “The Girl with Bangs”), and enjoy the ride. In The Autograph Man, just out in paperback, Alex Li-Tandem is a finder, seller, and forger of famous signatures, and through his eyes we see a world shaped by drugs, friendship, and religion (and the end of it), not to mention celebrities, their fans, and everyone in between. Smith appears at Cody’s, 2454 Telegraph Ave., Berkeley, at 7:30 p.m. for a reading and book signing. Free. 510-845-7852. — Stefanie Kalem

Before there was 10,000 Maniacs, there was John & Mary . Guitarist John Lombardi was a founding member of the band, and singer and classically trained violinist Mary Ramsey appeared on the Maniacs’ recorded output as early as 1991’s Our Time in Eden. The plainly named duo has a loyal following in their native upstate New York, charming SUNY college students system-wide with their idyllic folk-rock. They play Saturday at the Oakland Metro (201 Broadway at 2nd St.) with former Modern English member Gary McDowell and local singer-songwriter Vanessa Lowe opening. The 21-and-up show starts at 9:30 p.m. and cover is $10. 510-763-1146 — Stefanie Kalem

Though Gary Lachman cut his rock ‘n’ roll teeth in the ’70s, playing bass with Blondie (as Gary Valentine) and hanging with Johnny Thunders, he tackles an underrepresented side of the ’60s with aplomb in Turn Off Your Mind: The Mystic Sixties and the Dark Side of the Age of Aquarius. Lachman is no novice when it comes to both the pen and the ritualistic sword — he brings writing experience (for Mojo, the Times Literary Supplement, Fortean Times, and more) as well as firsthand occult knowledge to the book. Thursday, July 17, he appears for a reading and signing at Diesel, 5433 College Ave., Oakland, at 7:30 p.m. — Stefanie Kalem